Football Club Gueugnonnais (commonly called Gueugnon [ɡøɲɔ̃] ) is a French association football club based in Gueugnon, Burgundy. The club was formed in 1940 and plays its home matches at the Stade Jean Laville located within the city.

The club has spent majority of its history in the second and third tiers of French football, with short spells in the top flight. It has had success at national level, most notably winning the League Cup in 2000, Ligue 2 in 1979 and reaching the semi-finals of the French Cup in 1991.

The club faced bankruptcy in 2011 and subsequently reformed in the sixth tier; since then it has aimed to climb back up the league pyramid.

Football Club de Gueugnon was founded in 1940. Upon the club's creation, it earned the nickname Les Forgerons (The Blacksmiths), due to having strong support from the commune's local steelworks area. The club won the Championnat de France amateur in 1947 and, by 1970, were playing in the second division of French football. In 1974, inspired by playmaker Casimir Nowotarski, Gueugnon reached the second division promotion play-offs, but lost to Rouen. In 1979, the club won the second division title, however, due to the club's non-professional status and its inability to gain professional status by the start of the 1979–80 season, it was not allowed to participate in the first division.

The 1980s steel crisis forced the club to turn professional, and after several seasons of struggles to prevent relegation, the tide turned in 1991 when Gueugnon reached the semi-finals of the Coupe de France where the club was defeated by AS Monaco. In 1995, Gueugnon earned were officially promoted to Division 1 for the first time in the club's history after finishing runner-up in the second division, behind EA Guingamp. The promotion was short-lived, though, as the club returned to the lower league after an unsuccessful debut season.

In 2000, Gueugnon shocked French football supporters around the country after winning the Coupe de la Ligue. The club defeated the two-time champions of the competition Paris Saint-Germain 2–0 in the final. The victory resulted in Gueugnon becoming the first and only club to win the cup while playing in Ligue 2. The resulting success led to drastic consequences as many of the club's top players such as Sylvain Distin departed the club for better sporting and monetary opportunities. The following season, Gueugnon played the UEFA Cup but lost to Greek club Iraklis 1–0 on aggregate in the first round. After that season, the club hovered mid-table and just barely avoided relegation in 2004 with a 5–0 win over Lorient on the final match day of the season. The 2007–08 season proved disastrous with the club remaining blocked in the last position for most of the season. With only five wins overall, Gueugnon were relegated to third-tier National.

The club continued to play in the Championnat National, until entering liquidation in April 2011. [3] [4] In the summer of 2011, the club was reformed and joined the DH Bourgogne at the sixth tier of French football. Gueugnon won DH Bourgogne in 2012-13 season and was promoted to CFA 2.

Most Gueugnon supporters consider Montceau Bourgogne and Louhans-Cuiseaux as the club primary rivals due to each club's close proximity to each other.

Montceau are Gueugnon's historic rivals with both club being separated by less than 16 kilometres (9.9 mi). Gueugnon's rivalry with Montceau stems from the early 80s, in which the latter chairman Gérard Clayeux attempted by pry away several of Gueugnon's top players by offering to increase their wages. The resulting outcry led to the town, club, and support of Gueugnon developing a hatred towards their nearby foes. Gueugnon have a remarkable record against its rivals. The club has never lost a league game against Montceau, however, due to the club's not being in the same league for 20 years, the record has become skewed. On 20 October 2009, Gueugnon and Montceau faced off against each other in the Coupe de France. Montceau were surprise winners defeating Gueugnon 3–1, thus beating Gueugnon for the first ever time in an official competition.

Louhans-Cuiseaux have always been one of Gueugnon's rivals. Not only because the two clubs are relatively close to each other or because they have been in the same division for a long period of time, but also because Gueugnon sent Louhans down by holding them 1–1 on the last day of the Ligue 2 season in 1984–85. Since the 2008–09 season, the two clubs regularly met due to each playing in the Championnat National.

Below are the notable former players who have represented Gueugnon in league and international competition since the club's foundation in 1940. To appear in the section below, a player must have played in at least 80 official matches for the club.

Guillaume Warmuz is a French football coach and former player who played as a goalkeeper.

The 2008–09 Championnat National was the 16th edition of the 3rd division league. Play commenced on 1 August 2008 and ended on 29 May 2009. Vannes OC, Tours FC, and Nîmes Olympique were promoted to Ligue 2, replacing Chamois Niortais, FC Libourne-Saint-Seurin, and FC Gueugnon who were relegated from Ligue 2.

The 2009–10 Championnat de France Amateurs season was the 12th edition of the competition since its establishment. The competition officially began on 8 August 2009 and ended in May 2010. The competition consisted of 73 clubs spread into four parallel groups of 18 with one of the groups containing 19 clubs. It is open to reserve teams in France and amateur clubs in France, although only the amateur clubs are eligible for promotion to the Championnat National. The highest-placed amateur team in each pool are promoted, replaced by the four lowest-placed in the Championnat.

The 2009–10 Coupe de la Ligue was the 16th edition of France's league cup, organized by the LFP. The defending champions were Ligue 1 club Bordeaux who defeated second division club Vannes 4–0 in the 2009 final. The competition began on 25 July 2009 and the final was held on 27 March 2010 at the Stade de France. The winners of the Coupe de la Ligue will qualify for the third qualifying round of the UEFA Europa League 2010–11. Ligue 1 club Marseille won the competition by defeating fellow first division club Bordeaux by a score of 3–1 in the final, thus giving them their first trophy since 1992. 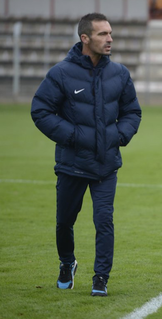 Jocelyn Ducloux is a footballer currently playing for Championnat de France amateur side FC Montceau Bourgogne. He plays as a defensive midfielder.

Charly Ollier is a French professional football player. Currently, he plays in the Championnat de France amateur for ÉDS Montluçon.

The 2010–11 Championnat de France amateur 2 was the 13th edition since its establishment. The reserves of Metz were the defending champions. Due to the elongated appeals process involving each clubs' eligibility, the groups and fixtures were unveiled to the public on 15 July 2010 and the season began on 21 August and ended on 4 June 2011. There were 22 promoted teams from the regional leagues of the Division d'Honneur, replacing the 22 teams that were relegated from the Championnat de France amateur 2 following the 2009–10 season. A total of 130 teams competed in the league with 22 clubs suffering relegation to the sixth division, the Division d'Honneur. All non-reserve clubs that secured league status for the season were subject to approval by the DNCG before becoming eligible to participate.

Olivier Bellisi is a French former professional footballer who played as a defender. He began his career with Olympique Lyonnais, where he made seven league appearances in three seasons. After a season on loan with Caen, he joined the club permanently in 1999. Bellisi was again sent out on loan during the 2000–01 season, to Louhans-Cuiseaux. Following his release by Caen in 2002, he moved into semi-professional football.

Corsican football club SC Bastia finished the 2010–11 season as champions of the French Championnat National and was promoted to Ligue 2. The club's top scorer of the season was David Suarez with 23 goals in 20 league matches. SC Bastia reached the 7th round of the Coupe de France and the last 16 of the Coupe de la Ligue. In May 2010, prior to the season, manager Faruk Hadžibegić was replaced by Frédéric Hantz.

The 2012–13 Championnat de France amateur was the 15th season since its establishment. CA Bastia was the previous season's club champions. The teams and groups were announced in July 2012. The season began on 11 August and ended on 25 May 2013.

The 2001–02 season was the 82nd season in the existence of FC Istres and the club's third consecutive season in the second division of French football. In addition to the domestic league, FC Istres competed in this season's edition of the Coupe de France and Coupe de la Ligue. The season covered the period from 1 July 2001 to 30 June 2002.

The 2001–02 season was the 130th season in the existence of Le Havre AC and the club's third consecutive season in the second division of French football. In addition to the domestic league, Le Havre AC competed in this season's edition of the Coupe de France and Coupe de la Ligue. The season covered the period from 1 July 2001 to 30 June 2002.

The 2004–05 season was Dijon FCO's seventh season in existence and the club's first ever season in the second division of French football. In addition to the domestic league, Dijon participated in this season's editions of the Coupe de France and the Coupe de la Ligue.

Gaby Jean is a French professional footballer who plays as a centre-back for Annecy.

Wikimedia Commons has media related to FC Gueugnon .
This page is based on this Wikipedia article
Text is available under the CC BY-SA 4.0 license; additional terms may apply.
Images, videos and audio are available under their respective licenses.