Tony Namate is a Zimbabwean cartoonist who has gained international recognition for his scathing cartoon commentary on socio-political issues in Zimbabwe and beyond. [1] [2] His 2011 collection of political cartoons, whose title -- "The Emperor's New Clods" -- alludes to Hans Christian Andersen's "The Emperor's New Clothes", has been described by the Association of American Editorial Cartoonists’ Kevin Kallaugher as “...[puncturing] the pomposity of the powerful on behalf of the poor and the powerless.” [3]

Growing up on American comics and British funnies his father would bring home from work, Tony was more fond of the drawings than he was of the text. He later became addicted to Mad magazine in high school in the 1980s, where he read Julius Caesar as well as George Orwell’s Animal Farm. The parallels between his country’s political situation and what he read would shape what was to become his political outlook. [4]

Tony Namate credits his career as a cartoonist to the pioneer cartooning in Zimbabwe, Hassan Musa, the first black cartoonist in the country in the 1970s. Tony started his career as an editorial cartoonist in 1988 with the Zimbabwean state-controlled The Herald newspaper, where he worked till 1991 when he left to do independent political cartoons. [2] He joined the Daily News, an independent daily, as an editorial cartoonist in 1999 when Zimbabwe politics was in turmoil: President Robert Mugabe, after leading the struggle to liberate the country from white minority rule, was being increasingly criticized for his autocratic style of governance and for human rights abuses while the economy was experiencing a worrisome nose-dive. [5]

Tony Namate's work has earned him attacks and threats of legal from the Government of Zimbabwe, which has described him as "treasonable, infuriating and unacceptable". [6] The Daily News, the independent paper he worked for in the late 90s, suffered a series of dangerous attacks, including one with a homemade bomb on 22 April 2000. A year later, in January 2001, another explosion blew up the daily's printing press. [7] [8] The paper and the cartoonist managed to carry on despite these attacks and the Daily News only shut its doors in 2003, when the government refused to grant it a permit. Namate refused to give up and rather went to work for the website New Zimbabwe. [5] [8]

Namate was a runner-up of the United Nations Correspondents Association's 2000 Ranan Lurie Political Cartoon Award, and was awarded the Cartoonists Rights Network, International's Courage in Editorial Cartooning Award, which he received in Lexington, Kentucky in 2004. [2] 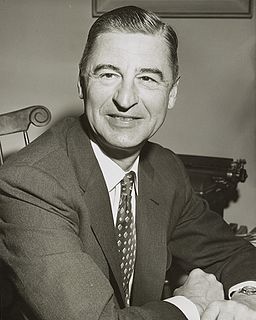 Theodor Seuss Geisel was an American children's author, political cartoonist, illustrator, poet, animator, and filmmaker. He is known for his work writing and illustrating more than 60 books under the pen name Dr. Seuss (,). His work includes many of the most popular children's books of all time, selling over 600 million copies and being translated into more than 20 languages by the time of his death. 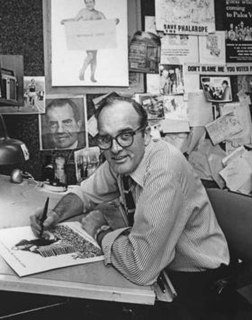 Paul Francis Conrad was an American political cartoonist and winner of three Pulitzer Prizes for editorial cartooning. In the span of a career lasting five decades, Conrad provided a critical perspective on eleven presidential administrations in the United States. He is best known for his work as the chief editorial cartoonist for the Los Angeles Times during a time when the newspaper was in transition under the direction of publisher Otis Chandler, who recruited Conrad from the Denver Post.

Michael Leunig, typically referred to as Leunig, is an Australian cartoonist, poet, artist, philosopher and cultural commentator. His best known works include The Curly Pyjama Letters, cartoon books The Essential Leunig, The Wayward Leunig, The Stick, Goatperson, Short Notes from the Long History of Happiness and Curly Verse, among others and The Lot, a compilation of his 'Curly World' newspaper columns. Leunig has also written a book of prayers, When I Talk To You. He was declared an Australian Living Treasure by the National Trust of Australia in 1999.

Jamie Smith credited as James T. Smith, is an Alaskan painter, printmaker, cartoonist and creator of the comic strips "Freeze-Frame" and "Nuggets".

William Anthony Auth, Jr. was an American editorial cartoonist and children's book illustrator. Auth is best known for his syndicated work originally drawn for The Philadelphia Inquirer, for whom he worked from 1971 to 2012. Auth's art won the cartoonist the Pulitzer Prize in 1976 and the Herblock Prize in 2005. 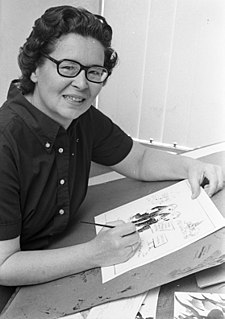 Etta Hulme was an American editorial cartoonist. Her syndicated cartoons started appearing in the Fort Worth Star-Telegram in 1972. Her drawing style has been described as "understated". Star-Telegram editorial page director Tommy Denton called her "one of the most insightful and provocative cartoonists in the country." 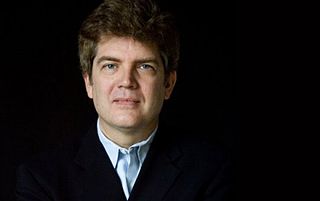 Francisco Flores Trinidad, Jr., better known by his pen name "Corky", was a Filipino-American editorial cartoonist and comics artist. Born in Manila, he was known for his editorial cartoons for the Honolulu Star-Bulletin since 1969, and especially for his Vietnam War comic strip Nguyen Charlie.

The Comics Curmudgeon is a blog devoted to humorous and critical analysis of newspaper comics. Its author, Josh Fruhlinger, is a freelance writer and editor based in Los Angeles. Fruhlinger, formerly based in Baltimore, also writes about editorial cartoons for the website Wonkette in a weekly feature called Cartoon Violence. He also contributes to a Wikipedia-themed humor blog called Citation Needed.

Manjul is an Indian political cartoonist. After working with major Indian publications like Dainik jagran, Rashtriya Sahara, Financial Express, India Today, The Economic Times and Daily News and Analysis currently he is contributing for various Indian publications & websites. He is also a winner of Maya Kamath Memorial Awards for Excellence in Cartooning 2009.

Bad Cat is a 2016 Turkish adult animated action comedy film directed by Mehmet Kurtuluş and Ayşe Ünal. The film is based on the comic strip Kötu Kedi Şerafettin by Bülent Üstün. This is an independent movie and this work was self-funded, with some of the budget raised through product placements. It was featured and became the first animated Turkish film and the first comic's adaptation from Turkey to be shown at the Annecy International Animation Film Festival in 2016. After the film's television premiere took place on 1 July 2017 in Turkey, the Radio and Television Supreme Council was fined the Kanal D television channel for airing this adult animation, which has a cat character who is a smoker and an alcoholic. 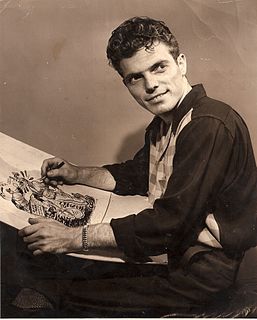 Lou Grant was an American editorial cartoonist. He mainly worked for the Oakland Tribune for 40 years and was the syndicated political cartoonist for the Los Angeles Times. His work was syndicated with the Los Angeles Times, and was seen daily throughout the country, as well periodically worldwide in Newsweek, (1960-1986) and Time Magazine (1960-1986). His life's work covered comedy and political satire, sports, radio, and political cartoons.

Khalil Rahman is a Bangladeshi political cartoonist. His cartoons have been appearing on the front page of some leading Bengali dailies including The Daily Jugantor and the daily Samakal.

The Emperor's New Clods: Political Cartoons from Zimbabwe is a collection of political cartoons by Tony Namate. The collection features cartoons published by the cartoonist in Zimbabwean newspapers between 1998 and 2005, highlighting some landmark moments in a troubled period of the country's history.

Bob Moran is a British cartoonist, whose work has been published in many publications including, Morning Star , The Guardian and The Daily Telegraph. On 12 October 2017 he was awarded the Cartoon Art Trust Award for Political Cartooning.