HighBeam Research was a paid search engine and full text online archive owned by Gale, a subsidiary of Cengage, for thousands of newspapers, magazines, academic journals, newswires, trade magazines, and encyclopedias in English. [1] It was headquartered in Chicago, Illinois. [2] In late 2018, the archive was shut down.

The company was established in August 2002 after Patrick Spain, who had just sold Hoover's, which he had co-founded, bought eLibrary and Encyclopedia.com from Tucows. The new company was called Alacritude, LLC (a combination of Alacrity and Attitude). ELibrary had a library of 1,200 newspaper, magazine and radio/TV transcript archives that were generally not freely available. [3]

Spain stated, "There was a glaring gap between free search like Google and high-end offerings like LexisNexis and Factiva." [4]

Later in 2002, it bought Researchville.com. By 2003, it had increased its archive base to articles from 2,600 publishers. In 2004, it was renamed HighBeam Research. In 2005, it increased its publisher base to 3,500 publishers. In 2006, Oxford University Press, Knight Ridder and The Washington Post archives were added. In 2008, it was purchased by Gale, a subsidiary of Cengage. [5] Highbeam featured many articles by the UK based Trinity Mirror Group.

Until late 2018, Highbeam Research was a partner in the Womensforum network and a major content provider for the WomensForum women's issues research website. [6]

Highbeam Research shut down in late 2018 after 16 years. 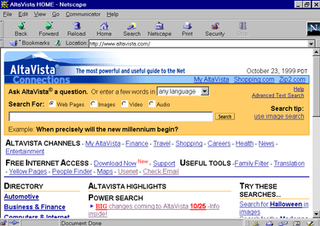 AltaVista was a Web search engine established in 1995. It became one of the most-used early search engines, but lost ground to Google and was purchased by Yahoo! in 2003, which retained the brand, but based all AltaVista searches on its own search engine. On July 8, 2013, the service was shut down by Yahoo! and since then the domain has redirected to Yahoo!'s own search site. 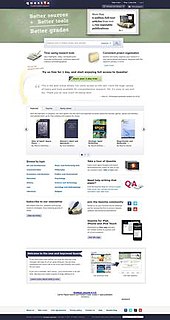 Questia was an online commercial digital repository of books and articles that had an academic orientation, with a particular emphasis on books and journal articles in the humanities and social sciences. All the text in all the Questia books and articles were available to subscribers; the site also included integrated research tools. As of December 21, 2020, it ceased operations.

The New Pittsburgh Courier is a weekly African-American newspaper based in Pittsburgh, Pennsylvania, United States. It is owned by Real Times.

Gale is an American educational publishing company based in Farmington Hills, Michigan, west of Detroit. It has been a division of Cengage since 2007.

QSaltLake is a lesbian, gay, bisexual and transgender (LGBT) news and entertainment magazine published monthly by Gay Salt Lake Inc. in Salt Lake City. The magazine is the feature publication for the corporation. Related publications, web sites and a nonprofit organization are among the corporate projects.

Real Times Media LLC is the owner and publisher of the Chicago Defender, the largest and most influential African American weekly newspaper, as well as five other regional weeklies in the eastern and Midwestern United States. Its headquarters are in Midtown Detroit. 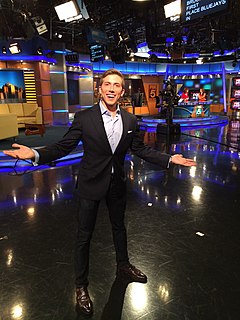 Baruch Yehudah Shemtov is an entertainment reporter, journalist, fashion designer, and entrepreneur. He was the Entertainment Anchor on Good Day New York on Fox 5 NY WNYW from 2017 to 2019. He was the New York Correspondent for Young Hollywood, a Special Correspondent for Extra. Shemtov founded a line of ties that currently sell in Japan at Journal Standard's TRISECT, and online at Zozotown.

Cengage is an American educational content, technology, and services company for the higher education, K-12, professional, and library markets. It operates in more than 20 countries around the world.

Judith Orloff is an American board-certified psychiatrist and is the author of five books.

Patrick J. Spain is a serial entrepreneur. He is currently the co-founder and CEO of First Stop Health, LLC., a Chicago-based provider of telemedicine services. He is also the Executive Chairman and co-founder of the news curation site Newser. Spain is the former Chairman and CEO Hoover's, which he co-founded; and the founder and former CEO of HighBeam Research. Hoover's was sold to Dun & Bradstreet in 2003, and HighBeam Research was purchased by Cengage Learning in 2008.

No Lifeguard on Duty: The Accidental Life of the World's First Supermodel is an autobiography by fashion model, photographer, author and talent agent Janice Dickinson. It was published in hardcover format in 2002 by ReganBooks, an imprint of HarperCollins. The author's friend make-up artist Way Bandy advised her to begin putting her past experiences down on paper as a form of therapy from prior trauma in her life. After gaining sobriety, she started compiling her notes into book format. She contacted book publisher Judith Regan who agreed to help her publish her book after hearing her tale on the phone, without first seeing a writing sample. In November 2014, Dickinson asserted in an interview with Entertainment Tonight that pressure from Bill Cosby and his lawyers resulted in the removal of an account of sexual assault and rape by Cosby when she visited him at a hotel in Lake Tahoe, California in 1982. After Cosby's attorney disputed this account, she reappeared on the program to proclaim she was telling the truth and explained she was speaking out publicly because of a need to be heard and to represent other women who stated they experienced a similar trauma.