Tony O'Connor is a former international rower from Ireland. Tony O'Connor is also double Olympian who represented Ireland and won five medals at the World Championships as part of a lightweight pair. In 2016, Tony also coached at the Southern Rowing Performance Centre. Tony O'Connor was born on (1969-06-01) June 1, 1969 (age 51) [1]

Ian Andrew Wright is a former New Zealand rower who won an Olympic bronze medal at the 1988 Summer Olympics in Seoul. Wright has won 31 national titles during his career. After his rowing career ended, he became a coach and his Swiss lightweight men's four team won gold at the 2016 Summer Olympics. He is now Australia's head rowing coach announced in September 2016. He immediately coached the Australian men's four to a gold medal at the 2017 world rowing championships.

Anthony John Edwards is an Australian former lightweight rower. He is a five time Olympian, triple Olympic medallist, a world champion and a six-time Australian national champion. He represented Australia at the premier world regattas consistently over a twenty year period from 1993 to 2012.

Richard Scott Chambers is a British rower, and is the brother of fellow rower Peter Chambers. At the 2012 Summer Olympics in London he was part of the British crew that won the silver medal in the lightweight men's four.

Paul Reedy is an Australian former rower. He is a dual Olympian, an Olympic and Commonwealth Games silver medalist who competed over a seventeen-year period at the elite level. He was a fourteen-time Australian national champion across both sculling and sweep-oared boats and then coached six Australian crews to national championship titles. He later coached at the London Rowing Club and was appointed as British national Head Coach from 2009. He took Great Britain's lightweight women's sculling crews to Olympic and World Championship gold medals in 2012 and 2016.

Derek Holland is an Irish rower. He reached fourth place at the 1996 Summer Olympics in the Men's Lightweight Coxless Fours.

Lucas Tramèr is a Swiss rower. He won gold at the 2016 Summer Olympics in the men's lightweight four, with Simon Schürch, Simon Niepmann and Mario Gyr. The team was coached by New Zealander Ian Wright. Tramèr has also won a number of gold medals at the World Rowing Championships. He also competed in the Men's lightweight coxless four event at the 2012 Summer Olympics.

Samuel Beltz is an Australian former lightweight rower. He is a 16-time national champion, a world champion and dual Olympian. He competed at the 2008 and 2012 Summer Olympics and represented Australia at the premier world class regattas over a fifteen-year period from 1999 to 2014. 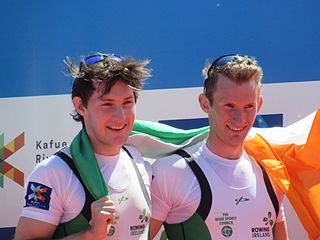 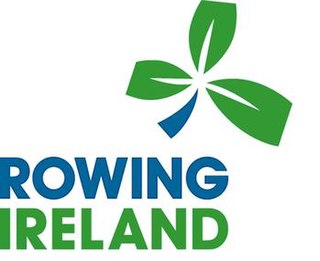 Rowing Ireland, formerly the Irish Amateur Rowing Union, is the governing body of rowing for Ireland. It is a cross-border organisation administering the sport in both the Republic of Ireland and Northern Ireland. 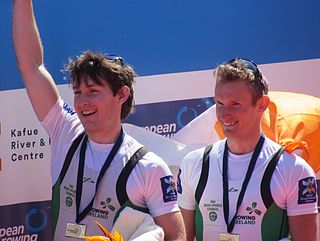 Lyall McCathy OAM is a former Australian national champion lightweight rower and national rowing coach. He has coached Australian crews to gold medals at the World Rowing Championships and the Olympic Games.

Andrea Re is an Italian lightweight rower. With eight gold medals at World Rowing Championships, he is one of the most successful rowers ever. He represented Italy at the 1996 Summer Olympics in Atlanta, USA.