Born in England, his father worked for the British Overseas Airways Corporation as an airport manager, so he grew up in Pakistan, the Bahamas, Canada, the United States and England, never spending as much as two years in the same school. [2]

Wheeler holds an engineering degree from Warwick University and an MBA from London Business School. [3] He was a former engineer at the Chrysler corporation.

After travelling across Europe with Maureen Wheeler, they arrived in Melbourne in 1972 and put out their first book, Across Asia on the Cheap in 1973. [4] This would grow into the Lonely Planet empire, a name derived from a misheard Joe Cocker song (the lyric was, in fact, "Lovely Planet"). [2] They married and had two children, Tashi and Kieran. [2]

In 1980, the publication of a guidebook to India effectively doubled the size of the company. [5]

BBC Worldwide bought 75 percent of their share of the company in 2007 and their remaining 25 percent in February 2011, [6] bringing the couple's net worth to $190 million.[ citation needed ]

His books since Lonely Planet include Bad Lands and Unlikely Destinations. [4]

In the 2014 Queen's Birthday Honours List, Wheeler and Maureen were both appointed as Officers of the Order of Australia (AO), each for "distinguished service to business and commerce as a publisher of travel guides, and as a benefactor to a range of Australian arts and aid organisations". [7] When interviewed on ABC TV "One Plus One" on 22 Jun 19 Wheeler said he has a home in England and Melbourne. 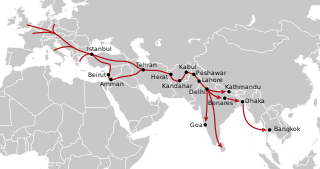 The hippie trail is the name given to the overland journey taken by members of the hippie subculture and others from the mid-1950s to the late 1970s between Europe and South Asia, mainly through Iran, Afghanistan, Pakistan, India, and Nepal. The hippie trail was a form of alternative tourism, and one of the key elements was travelling as cheaply as possible, mainly to extend the length of time away from home. The term "hippie" became current in the mid-to-late 1960s; "beatnik" was the previous term from the later 1950s.

Lonely Planet is a large travel guide book publisher. As of 2011, the company had sold 120 million books since inception.

David Peter Maxwell Hawker is a former Australian politician who served as a Liberal member of the Australian House of Representatives from May 1983 to July 2010, representing the Division of Wannon, Victoria, previously represented by former Prime Minister Malcolm Fraser.

Robyn Williams is a science journalist and broadcaster resident in Australia who has hosted the Science Show on the Australian Broadcasting Corporation since 1975, Ockham's Razor and In Conversation.

Zygmunt Edward "Ziggy" Switkowski,, is a Polish Australian business executive and nuclear physicist. His most public role was as the chief executive officer of Australia's largest telecommunications company Telstra from 1999 to 2004. During his tenure, he oversaw the privatisation of the then government-owned corporation through a series of public tranche sales. Currently, he is the chairman of both NBN Co and Suncorp, a director of Healthscope, Oil Search and Tabcorp and the Chancellor of the Royal Melbourne Institute of Technology. 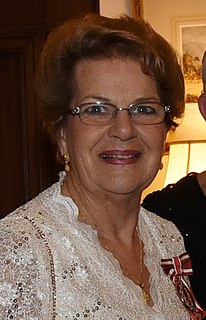 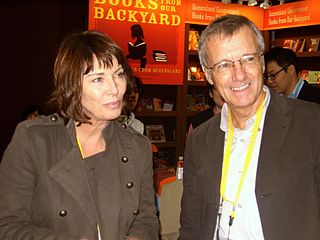 Maureen Wheeler,, is a Northern Irish-Australian businesswoman, who co-founded Lonely Planet with her husband Tony Wheeler.

Sir Rupert Horace Myers, was an Australian metallurgist, academic and university administrator, who was the third vice-chancellor of the University of New South Wales from 1969 to 1981. He was the second person to be awarded a PhD by an Australian University. He died on 21 February 2019 on his 98th birthday.

The Wheeler Centre, originally Centre of Books, Writing and Ideas, is a literary and publishing centre founded as part of Melbourne's bid to be a Unesco Creative City of Literature, which designation it earned in 2008. It is named after its patrons, Tony and Maureen Wheeler, founders of the Lonely Planet travel guides.

Vice Admiral Raymond James Griggs, is a former senior officer in the Royal Australian Navy. He served as Chief of Navy from June 2011 to June 2014, before being appointed Vice Chief of the Defence Force until his transfer to the reserve July 2018.

Brad Maurice Kelley is an American businessman who is the 7th largest landowner in the U.S., with an estimated net worth of US$2.2 billion in 2018. He founded the Commonwealth Brands tobacco company in 1991 and sold the company in 2001 to Houchens Industries for US$1 billion. As of 2014, Kelley's business interests include Calumet Farm, NC2 Media and the Center for Innovation and Technology business park.

Rolland Busch,, also known as Rollie Busch, was an Australian theologian and Presbyterian and Uniting Church minister. He was the foundation principal of the Trinity Theological College in Brisbane from when it was formed in 1977 until 1985. He was president of the Assembly of the Uniting Church in Australia from 1982 to 1985. He was appointed Officer of the Order of the British Empire (OBE) in the 1978 Queens Birthday Honours and appointed Officer of the Order of Australia (AO) in 1984.