Too Cool to Live, Too Smart to Die

Too Cool to Live, Too Smart to Die is a mini-LP released by the Canadian garage rock band Deja Voodoo.

A mini-LP or mini-album is a short vinyl record album or LP, usually retailing at a lower price than an album that would be considered full-length. It is distinct from an EP due to containing more tracks and a slightly longer running length. A mini-LP is not to be confused with the unique to Japan "mini LP sleeve" or "paper jacket" CD.

Garage rock is a raw and energetic style of rock and roll that flourished in the mid-1960s, most notably in the United States and Canada, and has experienced various revivals since then. The style is characterized by basic chord structures played on electric guitars and other instruments, sometimes distorted through a fuzzbox, as well as often unsophisticated and occasionally aggressive lyrics and delivery. Its name derives from the perception that groups were often made up of young amateurs who rehearsed in the family garage, although many were professional.

Deja Voodoo was formed by Gerard van Herk and Tony Dewald (drums), who combined 1950s horror imagery with rockabilly and country musical influences. Van Herk's guitar only had the top four strings and he sang in a deep voice, whilst Dewald's drum kit had no cymbals, which resulted in a low-treble rock style they termed "sludgeabilly." The band toured in Canada, the United States, and even Europe.

The LP was released by the American label Midnight Records. The same LP was later released on the band's own label Og Music, with 1988 re-recordings of the same songs. [1]

The Dils was an American punk rock band of the late 1970s, originally from Carlsbad, California, United States, and fronted by the brothers Chip Kinman and Tony Kinman. They appeared as the second act in the "battle of the bands" sequence in Cheech and Chong's film, Up In Smoke, where they can be heard before being seen performing "You're Not Blank". After recording the single "I Hate the Rich" / "You're not Blank" (1977), Algover decided to go to college with Pat Garret from Oklahoma taking his place. He also produced the second single on DangerHouse Records, "Class War" / "Mr. Big". After he was jettisoned, John Silvers was brought in and the band relocated to San Francisco in February 1978. 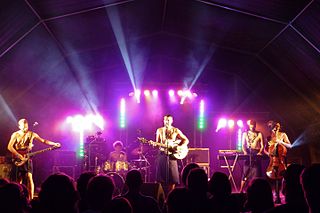 FannyPack was a New York City-based electronic/hip hop group that was formed in 2002 by music producers Matt Goias and "Fancy". The band featured vocals by Jessibel Suthiwong, Belinda Lovell, and Cat Hartwell.

Too Much Joy is an American alternative rock music group. The band formed in the early 1980s in Scarsdale, New York. 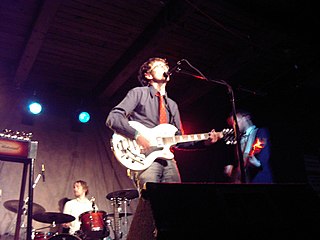 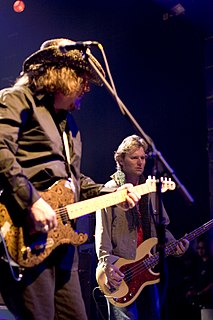 Og Music was a small but influential independent record label based in Montreal, Quebec, Canada.

Ross Andrew Hannaford was an Australian musician, active in numerous local bands. He was often referred to by his nickname "Hanna". Widely regarded as one of the country's finest rock guitarists, he was best known for his long collaboration with singer-songwriter Ross Wilson, which began as teenagers, with The Pink Finks and forming the seminal early '70s Australian rock band Daddy Cool. Hannaford died of cancer after being diagnosed a year earlier.

Neat Records was a record label based near Newcastle, England. The label was established in 1979 by David Wood, who was the owner of Impulse Studios in Wallsend, Tyne and Wear, England. After musician Conrad Lant began working at the studio in 1979, he convinced the studio to begin a label for rock and metal bands. The Neat label only had two other releases by a club band called Motorway and an 11 year old girl singer named Janie McKenzie, so the label decided to employ Lant as Artist liaison and invite bands to contact the studio. The label quickly signed a number of bands and the Neat catalogue began to grow quickly with EP releases and subsequent albums. Conrad Lant {aka: Cronos] later also signed to the label with his own band called Venom, and releasing several prominent singles and albums up until 1985. Another key figure in the establishment of the label was Steve Thompson. Thompson was house producer at Impulse at the time and helped set up Neat, became the A&R manager and produced all the initial recordings, as well as managing the publishing arm, Neat Music. The label was sold in 1995 to Sanctuary Records.

Carlos Perón is a Swiss musician. He was a founding member of the band Yello.

The Urges are a psychedelic garage rock music group from Dublin, Ireland.

I Fight Dragons is a rock band from Chicago. Their music is a combination of pop/rock with chiptune, featuring electronic sounds made using Nintendo Game Boys and Nintendo Entertainment Systems. To date they have released two full-length albums: 2011's KABOOM! which came out on Photo Finish / Atlantic Records, and 2014's The Near Future, which they self-released after raising over $100,000 on Kickstarter through their "Project Atma" project. They have also released two EPs, 2009's Cool Is Just a Number and 2010's Welcome to the Breakdown. Their music has been featured on Nintendo Video as well as on the WWE, and they wrote and performed the theme song for ABC's The Goldbergs. They have toured the USA with mc chris and Whole Wheat Bread in 2009, 3OH!3, Cobra Starship, and Travie McCoy in 2010, The Protomen in 2011, and they were on the entire 2012 and 2014 Vans Warped Tours. They went on their first national headlining tour, "The War of Cyborg Liberation Tour", with openers MC Lars and Skyfox in 2012. From 2010 until 2012 they were signed to Photo Finish / Atlantic Records, but in fall 2012 they won their release from the label. Frontman Brian Mazzaferri attended Glenbrook South High School with Fall Out Boy lead vocalist and guitarist Patrick Stump.

"20th Century Man" is a song recorded by British rock band The Kinks. It was released as a single in December 1971 from the band's 1971 LP Muswell Hillbillies, an album with blues and country roots. It centered on such themes as poverty, housing development, alienation, the welfare state, and other troubles of the modern world. 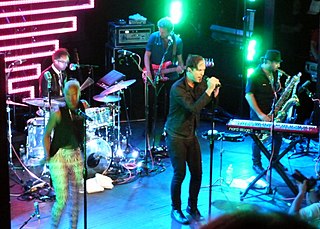 Fitz and The Tantrums are an American indie pop and neo soul band from Los Angeles that formed in 2008. The band consists of Michael Fitzpatrick, Noelle Scaggs, James King, Joseph Karnes, Jeremy Ruzumna (keyboards) and John Wicks. Their debut studio album, Pickin' Up the Pieces, was released in August 2010 on indie label Dangerbird Records and received critical acclaim. It reached No. 1 on the Billboard Heatseekers chart. The band signed to their current label Elektra Records in early 2013 and went on to release their second LP, More Than Just a Dream, on May 7, 2013. Their self-titled third album was released on June 10, 2016.

Fresh Sounds Records was a Lawrence, KS based independent record label run by local music promoter Bill Rich. Acts who have been on the label include Get Smart!, the Embarrassment, the Mortal Micronotz, Start, SPK, the Homestead Grays and William S. Burroughs.

Empirion are a British industrial techno band, from Essex, England. They were formed in 1993, and the original line-up consisted of Austin Morsely, Bob Glennie and Jamie Smart.

Have Not Been the Same: The Can-Rock Renaissance 1985–1995 is a book by Canadian music journalists Michael Barclay, Ian A.D. Jack, and Jason Schneider, which chronicles the development of alternative rock in Canada between 1985 and 1995. Published by ECW Press, the book has appeared in two editions, an original in 2001 (ISBN 1-55022-475-1) and an updated tenth anniversary edition in 2011 (ISBN 978-1-55022-992-9). In conjunction with the 2011 edition of the book, two compilation albums of music from the era chronicled by the book were also released as fundraisers for charitable organizations.

L.Stadt is a Polish band, playing rock music with elements of surf rock, country and psychedelic rock. It was founded in Łódź in 2003 and named after the city's name under the Nazi occupation, Litzmannstadt. The band has released two studio albums, L.Stadt (2008) and EL.P (2010), and an extended play You Gotta Move (2013).