Toonattik was the flagship children's strand of the British breakfast television station, GMTV (known on-air as CITV at weekends), which ran from 5 February 2005 to December 2010. The strand aired on weekend mornings from 07:25 until GMTV's closedown at 09:25, featuring a selection of both British and imported cartoons, mainly from brands such as Disney, Nickelodeon and Cartoon Network. It was presented by Jamie Rickers and Anna Williamson before being out-vision from May to December 2010.

Toonattik launched on 5 February 2005 as the new children's weekend morning slot on GMTV, featuring a mix of imported cartoons for ages 4–12. The slot was originally split into two, with the first half featuring pre-school programming with out-of-vision continuity, and the second half featuring shows for older children, which featured in-vision continuity links provided by Jamie Rickers and Anna Williamson. Initially the show relied heavily on phone-in competitions. After a few months on-air the slot was split into two, each adopting their own individual branding to separate the age categories. The pre-school slot for ages 0–6 became known as Wakey! Wakey! (later replaced by The Fluffy Club in 2008), with the 7-12 slot using the Toonattik name. The re-launch focused more on audience participation, with the presenters showcasing drawings and letters sent in by the viewers.

Each week Rickers and Willamson would lead teams of boys and girls in a battle of the sexes, playing various games to earn as much points as they could, a format later adopted by Holly and Stephen's Saturday Showdown in 2006. Viewers had the chance to send in suggestions for games, these were pulled from a special chest named the "Challenge Chest". Then the final game would be randomly chosen by the "Golden Wheel of Twizzle", and a spin of the "Toonattik Twizzler" would determine which of the two presenters would be playing that game. At the end of each show the losing team would receive a 'pie in the face' from the winners.

A new Toonattik website was created by 4T2 and launched in late January 2006, allowing viewers to play virtual versions of their favourite "Toonattik Twizzler" games, as well as send emails to Rickers and Williamson, read about their favourite cartoons and unlock bonus content by entering a secret code word revealed at the end of each show.

On 12 March 2006, ITV began simulcasting Toonattik on the CITV Channel, allowing younger Sky Digital, Virgin Media and Freeview viewers to access the show through the children's section of the EPG for the first time. Also, the EPG showed details for the programmes broadcast during the Toonattik time slot, instead of merely saying Toonattik.

A Toonattik board game was produced by Character Options Ltd in 2007.

On 6 March 2010 it was reported that Toonattik presenters Rickers and Willamson would be made redundant, [1] as part of ITV plc's buyout of Disney's 25% share in GMTV (since renamed to ITV Breakfast). They presented Toonattik together for the last time on 9 May 2010, which featured a big song finale at the end. Soon after their departure, Jamie & Anna were hired to work for Nickelodeon. From the following weekend, the slot re-launched with out-of-vision presentation, and this remained until its eventual axing at the end of 2010. From May to December 2010, the programme was hosted by the animated characters named the "Toonteam", in place of Rickers and Willamson. On 18 January 2014 children's in-vision presentation during the ITV Breakfast slot at weekends returned in the form of Scrambled!.

Action Stations! was the flagship children's strand of the British breakfast television station, GMTV2 (branded as part of CITV). The slot aired between 06:00 and 08:40 on the CITV channel.

Originally, Action Stations featured the voices of Toonattik presenters Jamie Rickers and Anna Williamson in the form of robots with pre-recorded links in between cartoons, and was later voiced by Mike Rance as a spaceship captain. Between September 2009 and May 2010, the slot had the presenters presenting links from the Action Station's 'space base'.

Action Stations featured characters Commander Action (David Kangas), Boogaloo (Serial #80064100) (Simon Fielding), Gribulous Bertnarg "Bert" Pimplewicks (Mike Rance) and Princess Akira, the ship's mechanic (Anna Singleton). These characters travelled the galaxy transmitting cartoons 'free to air' to the children of earth whilst trying to keep them from the clutches of the evil Dr Poopanski (James Hunt) who wanted to keep the cartoons for himself.

ITV is a British free-to-air television network with its headquarters in London. It was launched in 1955 as Independent Television to provide competition to BBC Television, which had been established in 1932. ITV is the oldest commercial network in the UK. Since the passing of the Broadcasting Act 1990, its legal name has been Channel 3, to distinguish it from the other analogue channels at the time, namely BBC1, BBC2 and Channel 4.

ITV Nightscreen is a scheduled programme on the ITV television network, consisting of a sequence of animated pages of information about ITV's upcoming programmes, features and special events, with an easy listening music soundtrack. The programme is used to fill the station's overnight downtime, where a closedown would have once been used at the end of programmes. The programme is generally shown 7 days a week with the typical weekday show airing from 3:50 am – 5:05 am daily.

Penelope Jane Smith is an English television presenter, newsreader and radio presenter. She has presented for Sky News, GMTV, Classic FM, BBC Radio London, and is the current presenter of Weekend Breakfast on Talkradio.

CITV is a British free-to-air children's television channel owned by ITV plc. It broadcasts content from the CITV archive and acquisitions, every day from 6 am to 9 pm which was previously 6 am to 6 pm until 21 February 2016. It is also the title of a programming block on the ITV network at weekends. 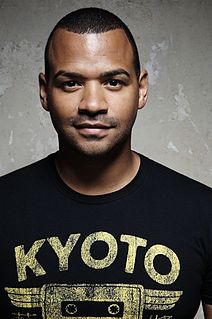 Michael Paul Underwood is an English retired television presenter, best known as a children's TV presenter on CBBC and CITV. He can be seen as a fifteen-year-old in an episode of The Crystal Maze, then presented by Richard O'Brien. He presented the primetime ITV series Let Me Entertain You in 2014 and was a reporter for Real Stories with Ranvir Singh.

Carlton Kids was a British digital terrestrial pay television kids channel, provided by Carlton Television, which started broadcasting in 1998 and closed in early 2000. Its sister channels were Carlton Food Network, Carlton World, Carlton Cinema and Carlton Select. It broadcast exclusively on ONdigital, the digital terrestrial pay-TV platform backed by Carlton and Granada, where it timeshared on channel 34 with Carlton World.

Milkshake! is a British children's television programming block on Channel 5. Aimed at preschool children aged 3-7 the block debuted on 17 September 1997 and is broadcast on weekdays from 06:00 to 09:15 and weekends from 06:00 to 10:00. The block has a number of presenters and features a range of children's programming. Its programmes include shows such as Thomas and Friends, Peppa Pig, Fireman Sam, PAW Patrol, Abby Hatcher, Daisy & Ollie, Ben & Holly's Little Kingdom, Floogals, Wissper, Top Wing, Bob the Builder (2015), and Noddy, Toyland Detective. Programmes for older children used to also air from 1997–2002 and 2007–2016 on spin-off Shake!, which used to run on weekends after Milkshake!

Anna Williamson is an English television presenter. She is known as the former co-presenter of children's programmes Toonattik and Action Stations! on CITV. In 2019, Williamson began appearing as a dating agent on the E4 reality dating series Celebs Go Dating.

SamSam is a French-Belgian television program based on a character created by Serge Bloch and directed by Tanguy de Kermel in association with Bayard Presse. His son inspired him to base the program's eponymous character on him.

James Rickers is a former British television presenter, best known as the co-presenter of children's programmes Prove It!, Toonattik and Up On The Roof on CITV.