Topiary Lucere is a public art work by American artist Steve Feren located in downtown Milwaukee, Wisconsin at a Marriott Hotel near the intersection of Plankinton and Wisconsin Avenues. The artwork consists of an array of concrete forms, sculpted boxwood shrub and a dramatically lit centerpiece. [1]

Topiary Lucere's composition is highly symmetrical, playing off the rectangles of glass on the stark facade it enhances. Six low concrete forms resembling chess pieces are set between square evergreen shrubs on either side of a plaza. The low forms are all the same height, but each features a different combination of rounded and angular elements. At the center, a tall concrete pedestal rises like an obelisk and is topped with an abstract textured glass ornament. At night, the glass is illuminated from within by a LED that changes colors as it glows. The obelisk is also lit from below at night, creating a focal point for the garden. [2]

Topiary is the horticultural practice of training perennial plants by clipping the foliage and twigs of trees, shrubs and subshrubs to develop and maintain clearly defined shapes, whether geometric or fanciful. The term also refers to plants which have been shaped in this way. As an art form it is a type of living sculpture. The word derives from the Latin word for an ornamental landscape gardener, topiarius, a creator of topia or "places", a Greek word that Romans also applied to fictive indoor landscapes executed in fresco.

Brise soleil, sometimes brise-soleil, is an architectural feature of a building that reduces heat gain within that building by deflecting sunlight. More recently, vertical Brise soleil have become popular. Both systems allow low-level sun to enter a building in the mornings, evenings and during winter but cut out direct light during summer.

The Mary Nohl Art Environment is a residence in the Milwaukee suburb of Fox Point, Wisconsin. The property, which is filled with folk art created by artist Mary Nohl (1914–2001), is listed on the National Register of Historic Places.

Bernard Otto Gruenke was an American stained glass artist who produced one of the first faceted glass windows in the United States in 1949. He was born in Sheboygan, Wisconsin.

John Fitzgerald Kennedy Federal Building is a United States federal government office building located in the Government Center area of Boston, Massachusetts, adjacent to City Hall Plaza and diagonally across from Boston City Hall. An example of 1960s modern architecture, and designed by Walter Gropius and The Architects Collaborative with Samuel Glaser, it is a complex that consists of two offset 26-floor towers that sit on-axis to each other and a low rise building of four floors that connects to the two towers through an enclosed glass corridor. The two towers stand at a height of 387 feet (118 m). The complex was built in 1963-1966. 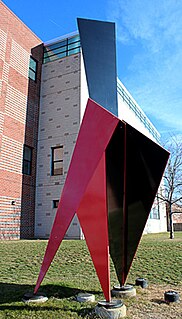 Celebrating the Arts is a public artwork by Indian artist Narendra M. Patel located at the Roosevelt Creative Arts Middle School, which is in Milwaukee, Wisconsin, United States. The sculpture is an abstract form created from over two tons of steel sheets welded together. It is 20' high x 14' wide x 6' deep and was constructed in 1989.

Bay View Series is a public artwork by American artist Peter Flanary (artist) located on the Bay View Public Library grounds, which is on the south side of Milwaukee, Wisconsin, United States. Flanary's 1993 Bay View Series consists of three granite rocks and one chunk of taconite iron ore. All have text on them, and the iron ore piece has a hole in the middle. The largest piece measures approximately 68 x 77 x 28 in. 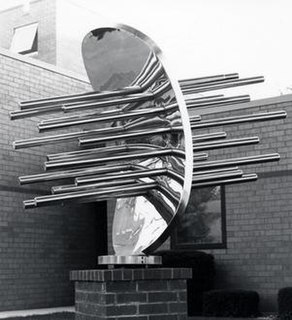 Deflected Jets is a public artwork by American artist Guido Peter Brink located on the Fire Engine Company #29 grounds, which is at 3529 South 84th Street in Milwaukee, Wisconsin in the United States. Commissioned in 1987 and installed the following year, the work consists of a stainless steel abstract form atop a red brick base, to which a placard is affixed. The total size of the piece is approximately 136 by 35 by 35 inches.

Uptown Triangles is a public artwork by artist John Adduci, located on the corner of N. 48th St. and W. Lisbon Ave. which is in Milwaukee, Wisconsin, USA. The work is a monumental sculpture in the form of intersecting triangles made of aluminum. It is 20 feet tall, 12 feet in width and 10 feet in depth and sits on a concrete foundation. The piece was created in 2009 and is owned by the Uptown Crossing Business Improvement District BID 16.

Space Game is a public artwork by American artist Joseph Mendla. The piece is located at 1515 West Canal Street, in Milwaukee, Wisconsin, United States. This piece was made originally for an indoor setting to be placed as three pieces and no base. Mendlay ended up giving this piece to Peck Meat Packing Corporation. The concrete base and lights were added. Even after the Peck family sold their slaughterhouse business in the late 1980s the sculpture still remains. 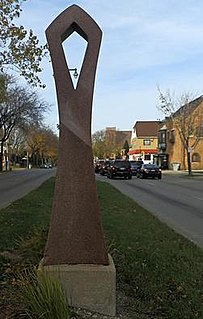 Two Opposites Reaching Up Toward the Peak of Progress is a public art work by American artist Thomas Queoff, located on the south side of Milwaukee, Wisconsin. The granite sculpture is an obelisk made of a narrow piece of red granite cut into a tapering hourglass form. At its base, the sculpture is approximately two feet wide. As the sculpture narrows by a foot toward its midsection, the granite's surface is faceted along a diagonal line. Toward the sculpture's again wider top, a trapezoidal void in the shape of an elongated diamond divides the granite and gives it the appearance of the eye of a needle. The artwork is located in the traffic median on S. Layton Blvd. between W. Greenfield Ave. and W. Orchard St.

Fire and Water is a public art work by American artist John Luttropp, located on the southwest side of Milwaukee, Wisconsin. The multi-element architectural sculpture was created for the entrance of the Milwaukee Fire Department Engine Company #25 station. It is located at 300 S. 84th St.

A Beam of Sun to Shake the Sky is a public art work by American artist Richard Taylor, located in downtown Milwaukee, Wisconsin. The sculpture was created for the Central Milwaukee Public Library as part of the remodeling of the Wells Street entrance.

Vliet Street Commons is a public art work by American artist Jill Sebastian, located on the west side of Milwaukee, Wisconsin near 50th and Vliet Streets. The work was created as part of a revitalization effort.

Gear 23 is a public art work by artist Steven Feren. It is installed at the Milwaukee Fire Department's Engine Company #4 station on the northwest side of Milwaukee, Wisconsin.

Fairies Candles is a public art work by artist Marina Lee. It was installed in Kilbourn-Kadish Park on a bluff overlooking the Milwaukee River near downtown Milwaukee, Wisconsin in 2005.

Kindred Ties is a work of public art by Evelyn Patricia Terry located near the intersection of Fond du Lac Avenue, North Avenue and 21st Street on the north side of Milwaukee, Wisconsin, United States. The artwork, a bus shelter of painted metal and glass, was commissioned by the Spirit of Milwaukee Neighborhood Millennium Art Initiative. Terry created the work in collaboration with a team of local artists.

Pangaea is a public art work by artist Michaela Mahady, on the east side of Milwaukee, Wisconsin on the campus of the University of Wisconsin–Milwaukee. The mixed media work incorporates concrete, brick, stone, steel, ceramic tile and colored leaded glass into a pavilion crowned with images of technology. Pangaea represents the global nature of today's world. The artwork is located in a courtyard behind the Sheldon B. Lubar School of Business and was funded by the Wisconsin Arts Board's Percent for Art program.