Torfinnstindene is a mountain with three summits in Norway, the highest at 2120 m above sea level. It is located within the municipality of Vang, Innlandet, in the southernmost part of the Jotunheimen mountain area. It is situated on the northern shore of lake Bygdin on the western side of the Svartdalen Valley and is the southernmost and most prominent summit on a rather long ridge containing twelve more 2000 m peaks. The summit can be observed from most of the mountain areas south of Jotunheimen.

The mountain consists of three summits, named Østre, Midtre and Vestre Torfinnstind (Eastern, Middle and Western). The name probably derives from the Norwegian male name Torfinn, but some sources claim that the name derives from the local name of a type of grass and has during the last 100 years been transformed into Torfinn, which is close to the name of the grass, Turfing. The name is also found in the valley due west of the summits, the small glacier covering parts of the extremely steep north wall, the sharp ridge pointing northwards from the Western summit and the tourist lodge situated on lake Bygdin south of the mountain.

The Eastern summit was reached for the first time in 1876 by Emmanuel Mohn, William Cecil Slingsby and Knut Lykken. The two first being mountaineers from Christiania and Great Britain, and the third the local expert. In 1894 the middle summit was climbed by, Andreas Saxegaard, Therese Bertheau, Antonette Kamstrup and Tostein Røine, the last one being the local expert. The western summit, which is the easiest to climb, was visited for the first time in 1912 by Rolv Ødegaard

The summits are the southernmost 2000 m peaks in Norway, but one, and is made of the extremely hard gabbro rock. The gabbro in Torfinnstindene is partly of the normal "gray-with-black-specs" variety, but parts of the eastern summit are of a red variety. The view from the summits, particularly the Eastern, is one of the best in southern Norway. On a clear day, you can see almost as far as Oslo.

The Eastern and Western summits can be reached after a rather strenuous hike, but the Middle summit can only be climbed - normally as part of a traverse of all the summits. The following is a brief description of the trip. The first part of the hike follows the grass- and flower-covered slope on the southeast flank of the Eastern summit. A number of ravines, dug out by meltwater from the Ice Age on, leads towards the summit. Only one of them leads all the way to the eastern shoulder of the summit. This is a steep climb, but with good weather conditions no equipment is needed.

From the eastern summit, a long rappel is needed to reach the very steep and narrow pass between the two summits. The climb to the middle summit needs no equipment. From the middle summit three rappels are needed to get all the way down to the even more steep and narrow pass between the two last summits. The climb up the lowest, western summit, is quite easy, but many would prefer to use a rope on a short part of the climb. From the western summit, a sharp edge leads down to the long ridge turning northwards towards lake Gjende. The rest of the descent is long talus slopes.

The climb of the eastern summit has gained popularity in the last years of increased peak bagging in Norway, and guided tours are arranged. The traverse is also popular, but the number who completes it is much lower than the number of visitors on the eastern summit. The western, easiest and lowest summit is visited rather rarely except by those traversing.

Galdhøpiggen is the tallest mountain in Norway, Scandinavia and Northern Europe, at 2,469 m (8,100 ft) above sea level. It is in the municipality of Lom in Innlandet county and in the Jotunheimen mountain area.

Sgùrr Dearg is a mountain in the Cuillin on the Isle of Skye, Scotland. It is topped by the Inaccessible Pinnacle, a fin of rock measuring 50 metres (150 feet) along its longest edge. The top of the Inaccessible Pinnacle, which at 985.8 m (3,234 ft) is the highest point of Sgùrr Dearg and the only Munro with a peak that can only be reached by rock climbing. This makes it the biggest hurdle for many Munro baggers. 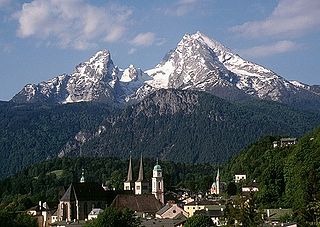 The Watzmann is a mountain in the Bavarian Alps south of the village of Berchtesgaden. It is the third highest in Germany, and the highest located entirely on German territory.

Toubkal or Tubkal is a mountain peak in southwestern Morocco, located in the Toubkal National Park. At 4,167 metres (13,671 ft), it is the highest peak in the Atlas Mountains, Morocco, North Africa and the Arab World. Located 63 km (39 mi) south of the city of Marrakesh, and visible from it, Toubkal is an ultra prominent peak, the highest for over 2,000 km (1,200 mi). For climbers it is "the most popular mountain objective in the Atlas mountains".

Glittertind is the second highest mountain in Norway, at 2,465 m above sea level, including the glacier at its peak. It is in the municipality of Lom, in the Jotunheimen mountain area.

JotunheimenNational Park is a national park in Norway, recognized as one of the country's premier hiking and fishing regions. The national park covers 1,151 square kilometres (444 sq mi) and is part of the larger area Jotunheimen. More than 250 peaks rise above an elevation of 1,900 metres (6,200 ft), including Northern Europe's two highest peaks: Galdhøpiggen at 2,469 metres (8,100 ft), and Glittertind at 2,465 metres (8,087 ft).

Bitihorn is a mountain in the southernmost outskirts of Jotunheimen, Norway. It is situated due west of national route 51, and is therefore a landmark for tourists following that popular route.

Store Styggedalstind, is the fourth-highest summit in Norway, located within the Hurrungane mountains, which are part of the Jotunheimen mountain range. The mountain is located in the eastern part of the municipality of Luster in Vestland county, Norway. This mountain is directly between the mountains Sentraltind and Jervvasstind.

The Nautgardstind is a mountain in Norway, at 2,258 m above sea level. It is located within the municipality of Lom in Innlandet county and in the Jotunheimen mountain area. It is situated on the absolute eastern flank of Jotunheimen between the Veodalen and Sjodalen Valleys and is the southernmost and highest summit on a rather long ridge containing six more 2,000-m peaks. The summit can be observed along parts of National Route 51 from Båtskaret in the south to Hindsæter in the north.

Gjende is a lake in the Jotunheimen mountains in Norway's Jotunheimen National Park. The proglacial lake shows typical characteristics of glacial formation, being long and narrow, with steep walls—18 km in length and only 1.5 km in width at the broadest point. Gjende has a characteristic light-green color resulting from the large quantity of rock flour which is discharged into the Gjende by the Muru river. The river Sjoa provides the outlet from Gjende at Gjendesheim, and flows eastward into the Gudbrandsdalslågen river.

Kalvehøgde is a 10 km long massif in the southernmost part of the Jotunheimen mountain range. The northern part of the massif lies within Jotunheimen National Park. The massif rises quite slowly from lake Bygdin, and ends in an extremely steep wall to the north. The wall is about 500 to 700 m high. On the northern side of the massif, there are several glaciers, with Leirungsbrean as the greatest. On the southern slopes there are two smaller glaciers - the Kalveholobrean glaciers. All the glaciers have retreated in the later years.

Skarstind is a prominent part of the Galdhøpiggen mountain range in northwestern Jotunheimen, Norway, and is the sixth highest summit in the country. The mountain has three summits, the main summit at 2,373 meters above sea level, Nåle, the Needle, at 2,310 m and the small western summit at 2,215 m. It is located within the municipality of Lom, on the eastern side of the Leirdalen valley, and the summit can be seen from the road along the valley floor. There are several other peaks in the vicinity, but only Galdhøpiggen, a few kilometers to the east, is higher. The mountain can be seen from most of the higher peaks in Jotunheimen and Breheimen to the northwest.

Rasletind is a mountain with two summits in Norway, the highest at 2105 m above sea level. It is located on the border between the municipalities of Vang and Vågå, in Innlandet county, but the northwestern corner of the municipality of Øystre Slidre reaches the summit of Øystre Rasletind. It is the southeasternmost summits in the Jotunheimen mountain area. It is situated on the western side of the high mountain plain of Valdresflyi. It is the eastern end of the long east-west-trending Kalvehøgde massif. The summit can be observed from most of the mountain areas south and east of Jotunheimen.

Sgùrr MhicChoinnich is a mountain on the Isle of Skye in Scotland. It is in the Black Cuillin range of mountains and is classified as a Munro. Like all the other Black Cuillin mountains it is made predominantly of gabbro rock and has little vegetation. The mountain is named after the mountain guide, John MacKenzie. 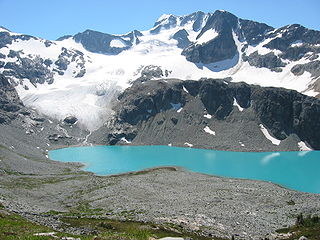 Wedge Mountain, 2895 m (9497 ft) prominence: 2249 m, often locally referred to as The Wedge or simply "Wedge", is the highest summit in the Garibaldi Ranges and therefore also Garibaldi Provincial Park, and is among the nearest of the many peaks visible from the Whistler Blackcomb Ski Area, lying north across the valley of Billygoat Pass from the Spearhead Range, which includes one of that resort's two flagship mountains, Blackcomb. It was named for its distinctive wedge shape by the Garibaldi Park Board in 1932 in preference to Mount Vancouver, which had been submitted earlier. It is part of an unnamed range forming the most northerly group of peaks in the Garibaldi Ranges, the other two most notable being Mount Weart, known as the Armchair because of its shape, and Mount Currie, which overlooks the First Nations Reserve of the same name and the neighbouring town of Pemberton. Wedge's very high prominence is defined by the divide between the Green and Cheakamus Rivers at a locality at the south end of Alta Lake known as Tokum Corners. 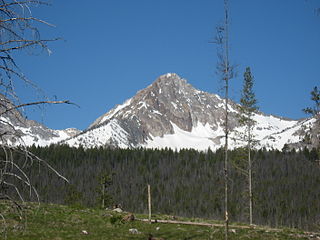 Mount Tagapo, also known as Susong Dalaga mountain, is a conical peak on the lake island of Talim on Laguna de Bay, the largest lake in the Philippines. The mountain ridge is 438 m (1,437 ft) in elevation and the highest point of Talim Island. The peak falls under the jurisdiction of the towns of Binangonan and Cardona in Rizal province. 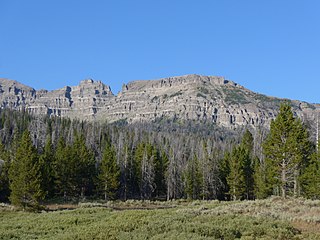 Breccia Peak is a mountain in the southern Absaroka Range in the Rocky Mountains. It is located in Teton County in U.S. state of Wyoming near Togwotee Pass and close to the southwest border of the Teton Wilderness within the Bridger-Teton National Forest.