The Tour of South China Sea is an annual professional road bicycle racing classic one-day race held in Guangdong, Hong Kong and Macau since 1996 as part of the UCI Asia Tour. It has been held during Christmas holiday every year since 1996 to celebrate the handover of Hong Kong and Macau to China. [1] [2] The race was won four times by Wong Kam-po. The race is currently rated by the International Cycling Union (UCI) as a 1.2 category race.

Bowen Road is a road from the Mid-levels to Wong Nai Chung Gap of Hong Kong Island, on the slope above Central, Wan Chai and Happy Valley in Hong Kong. Bowen Road starts from Magazine Gap Road near the rail of Peak Tram and ends at the junction with Stubbs Road, Tai Hang Road and Wong Nai Chung Gap Road.

The South China Morning Post, with its Sunday edition, the Sunday Morning Post, is a Hong Kong English-language newspaper founded in 1903. It is Hong Kong's newspaper of record, owned by Alibaba Group. The journal was founded by Australian-born anti-Qing dynasty revolutionary Tse Tsan-tai and British journalist Alfred Cunningham, with the first edition of the paper published on 6 November 1903. The journal's circulation has been relatively stable for years—the average daily circulation stood at 100,000 in 2016. In a 2019 survey conducted by the Chinese University of Hong Kong, the SCMP was shown to be seen as the most credible paid newspaper in Hong Kong. 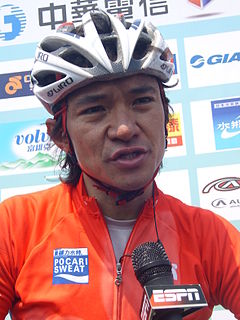 Wong Kam-po SBS BBS MH in Shatin, Hong Kong, is a world champion racing cyclist. After retiring from professional cycling, he is now a coach in the Hong Kong team.

The Hong Kong Ballet (香港芭蕾舞團) is a classical ballet company founded in 1979.

Midland Holdings Limited is one of the largest real estate brokerage companies in Hong Kong. It provides residential, industrial and commercial property brokerage services in Hong Kong, Macau and the People's Republic of China.

Hong Kong Velodrome is a velodrome in Tseung Kwan O, Hong Kong. It has a 250-metre cycling track and spectator facilities for 3,000 people. It opened in December 2013 next to the Tseung Kwan O Sports Ground.

Kwok Ho-Ting Marco is a world champion Hong Kong cyclist. On 24 March 2011, he stunned a quality field to win the gold medal in the Men's 15-kilometer scratch at the 2011 UCI Track Cycling World Championships in Apeldoorn, the Netherlands. Kwok beat Italy's Elia Viviani to second place, with Morgan Kneisky of France taking third.

Makoto Iijima is a Japanese professional road and track cyclist. Considered as one of Japan's most successful cyclists in his decade, Iijima has claimed a total of nine track cycling medals at the Asian Championships, two silvers at the Asian Games, and three national time trial titles at the Japanese Championships. He also represented his nation Japan in three editions of the Olympic Games. He announced his retirement from professional cycling in October 2010 as a member of the Bridgestone–Anchor team, but continues to ride occasionally for the non-professional team Gruppo-Acqua-Tama.

Hong Kong is scheduled to compete at the 2020 Summer Olympics in Tokyo from 24 July to 9 August 2020. It will be the territory's seventeenth appearance at the Summer Olympics, since its debut as a British colony in 1952.