Transamund II [lower-alpha 1] was the Lombard Duke of Spoleto from 724 to 745, [1] though he was twice driven from power by the king, Liutprand. Transamund rose to power by deposing his own father, Faroald II, and tonsuring him in a monastery.

Liutprand was the King of the Lombards from 712 to 744 and is chiefly remembered for his Donation of Sutri, in 728, and his long reign, which brought him into a series of conflicts, mostly successful, with most of Italy. He is often regarded as the most successful Lombard monarch, notable for the Donation of Sutri, which was the first accolade of sovereign territory to the Papacy.

In 737 or 738, Transamund captured Gallese and thus disrupted communication between Rome and Ravenna. Pope Gregory III offered to pay for the return of Gallese in return for a peace treaty with Transamund. The treaty included the Gregory, Duke of Benevento. Liutprand rejected the treaty as contrary his interests and attacked Transamund as a traitor. He had taken Spoleto by 16 June 739 and appointed Hilderic as his replacement. [2] Transamund fled to Rome, where Liutprand besieged him. The king took Amelia, Orte, Bomarzo, and Bieda, but still the pope refused to release his refugee. Gregory even wrote to ask Charles Martel, Duke of the Franks, for assistance. Charles, however, refused. [3] 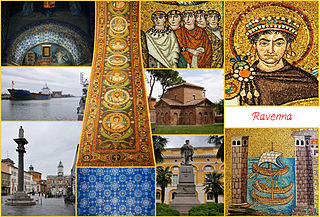 In December 740, Transamund recovered his duchy and killed Hilderic with Papal-Beneventan aid, [4] but did not return the confiscated papal cities and his alliance with the pope ruptured. Liutprand did not recognise Transamund's reconquest and set out to dispossess him a second time. This time Liutprand met with Gregory's successor, Zachary, in 742 and, promising to restore the four towns, allied with the Romans and forced Transamund to flee again. [5] Transamund was caught and put in a monastery. Agiprand, Liutprand's nephew, was put in his place. The new duke of Benevento, Godescalc, who had succeeded Gregory without royal assent and continued to support Transamund, was the next object of royal wrath. 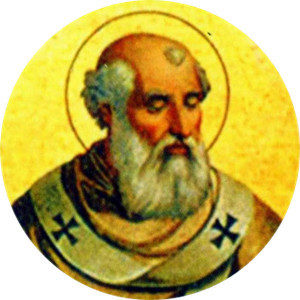 Pope Zachary reigned from 3 December or 5 December 741 to his death in 752. A Greek from Santa Severina, Calabria, he was the last pope of the Byzantine Papacy. Most probably he was a deacon of the Roman Church and as such signed the decrees of the Roman council of 732, and succeeded Gregory III on 5 December 741.

Agiprand was briefly the Duke of Spoleto between 742 and 744.

Godescalc was the Duke of Benevento in Langobardia minor from 740 until his assassination in 743. Godescalc's accession was without approval of the King.

On Liutprand's death in 744, Transamund managed to regain power in Spoleto. He lasted another year under the weak King Hildeprand the Useless until he died. 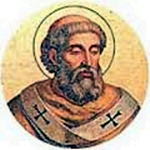 Pope Gregory III was Pope from 11 February 731 to his death in 741. His pontificate, like that of his predecessor, was disturbed by the iconoclastic controversy in the Byzantine Empire, and by the ongoing advance of the Lombards, in which he invoked the intervention of Charles Martel, although ultimately in vain. He was the 5th Syrian pope and the 10th and last pope born outside of Europe for 1,272 years, until the election of Pope Francis in 2013.

Year 740 (DCCXL) was a leap year starting on Friday of the Julian calendar. The denomination 740 for this year has been used since the early medieval period, when the Anno Domini calendar era became the prevalent method in Europe for naming years.

Desiderius was a king of the Lombard Kingdom of northern Italy, ruling from 756 to 774. He is chiefly known for his connection to Charlemagne, who married his daughter and conquered his realm.

Aistulf was the Duke of Friuli from 744, King of Lombards from 749, and Duke of Spoleto from 751. His father was the Duke Pemmo. 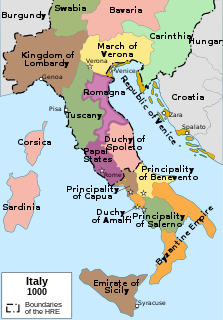 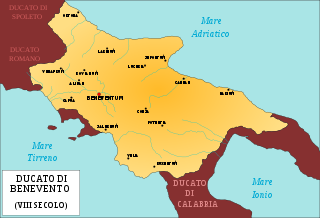 The Duchy of Benevento was the southernmost Lombard duchy in the Italian peninsula, centered on Benevento, a city in Southern Italy. Being cut off from the rest of the Lombard possessions by the papal Duchy of Rome, Benevento was practically independent from the start. Only during the reigns of Grimoald, King of the Lombards and the kings from Liutprand on was the duchy closely tied to the kingdom. After the fall of the kingdom, however, alone of Lombard territories it remained as a rump state, and maintained its de facto independence for nearly three hundred years, though it was divided after 849.

Hildeprand, sometimes called the Useless, was the king of the Lombards from around 735 in association with his uncle, Liutprand. After Liutprand's death in 744, Hildeprand ruled in his own name until he was overthrown later that year by Ratchis, duke of Friuli.

Gisulf II was the third last duke of Benevento before the fall of the Lombard kingdom. He ruled from 743, when King Liutprand came down and removed Godescalc, to his death up to ten years later.

Hilderic was the Lombard Duke of Spoleto briefly from 739 to 740. He was the first appointee of Liutprand, King of the Lombards, against the rebellious Thrasimund II.

Thrasimund I or Transamund I was the Count of Capua and then Duke of Spoleto, a faithful follower of Grimoald I of Benevento.

Faroald II was the duke of Spoleto from 703, when he succeeded his own father Thrasimund I.

Theodicius was the Duke of Spoleto from 763 to 773. Though it is often stated that he died at the Siege of Pavia (774), he was still alive on 9 June 776, when Charlemagne confirmed the properties of the monastery of Farfa and Abbot Ingoald in the reign of his successor Hildeprand.

Winiges was the Duke of Spoleto from 789 to his death. He was probably a Lombard in the entourage of Charlemagne when he was sent in 788 to lead Hildeprand of Spoleto and Grimoald III of Benevento in cooperation with Frankish troops against a Byzantine invasion. 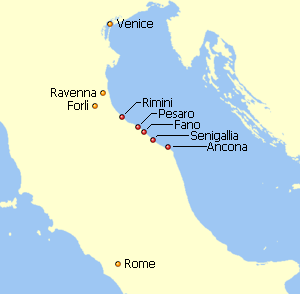 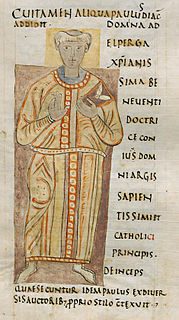 Paul the Deacon, also known as Paulus Diaconus, Warnefridus, Barnefridus, Winfridus and sometimes suffixed Cassinensis, was a Benedictine monk, scribe, and historian of the Lombards.