Tritrabidae is a family of radiolarians in the order Spumellaria. They range in age from 235 to 125 million years. [1] 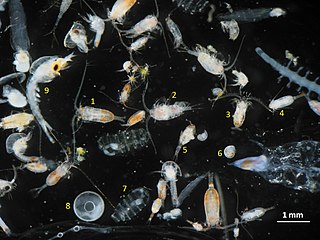 Zooplankton are heterotrophic plankton. Plankton are organisms drifting in oceans, seas, and bodies of fresh water. The word zooplankton is derived from the Greek zoon (ζῴον), meaning "animal", and planktos (πλαγκτός), meaning "wanderer" or "drifter". Individual zooplankton are usually microscopic, but some are larger and visible to the naked eye.

The Radiolaria, also called Radiozoa, are protozoa of diameter 0.1–0.2 mm that produce intricate mineral skeletons, typically with a central capsule dividing the cell into the inner and outer portions of endoplasm and ectoplasm. The elaborate mineral skeleton is usually made of silica. They are found as zooplankton throughout the global ocean. As zooplankton, radiolarians are primarily heterotrophic, but many have photosynthetic endosymbionts and are, therefore, considered mixotrophs. The skeletal remains of some types of radiolarians make up a large part of the cover of the ocean floor as siliceous ooze. Due to their rapid change as species and intricate skeletons, radiolarians represent an important diagnostic fossil found from the Cambrian onwards.

The polycystines are a group of radiolarians. They include the vast majority of the fossil radiolaria, as their skeletons are abundant in marine sediments, making them one of the most common groups of microfossils. These skeletons are composed of opaline silica. In some it takes the form of relatively simple spicules, but in others it forms more elaborate lattices, such as concentric spheres with radial spines or sequences of conical chambers.

Sticholonche is a genus of radiolarians with a single species, Sticholonche zanclea, found in open oceans at depths of 99–510 metres. It is generally considered a heliozoan, placed in its own order, called the Taxopodida. However it has also been classified as an unusual radiolarian, and this has gained support from genetic studies, which place it near the Acantharea. 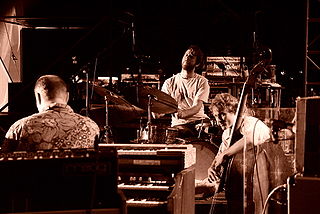 The Phaeodarea, or Phaeodaria, are a group of amoeboid Cercozoa. They are traditionally considered radiolarians, but in molecular trees do not appear to be close relatives of the other groups, and are instead placed among the Cercozoa. They are distinguished by the structure of their central capsule and by the presence of a phaeodium, an aggregate of waste particles within the cell. 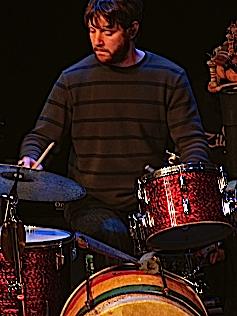 Kunstformen der Natur is a book of lithographic and halftone prints by German biologist Ernst Haeckel. 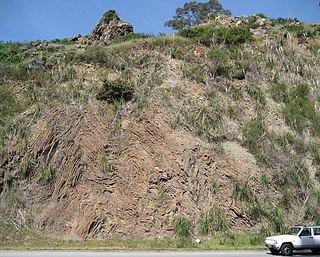 Radiolarite is a siliceous, comparatively hard, fine-grained, chert-like, and homogeneous sedimentary rock that is composed predominantly of the microscopic remains of radiolarians. This term is also used for indurated radiolarian oozes and sometimes as a synonym of radiolarian earth. However, radiolarian earth is typically regarded by Earth scientists to be the unconsolidated equivalent of a radiolarite. A radiolarian chert is well-bedded, microcrystalline radiolarite that has a well-developed siliceous cement or groundmass.

Siliceous ooze is a type of biogenic pelagic sediment located on the deep ocean floor. Siliceous oozes are the least common of the deep sea sediments, and make up approximately 15% of the ocean floor. Oozes are defined as sediments which contain at least 30% skeletal remains of pelagic microorganisms. Siliceous oozes are largely composed of the silica based skeletons of microscopic marine organisms such as diatoms and radiolarians. Other components of siliceous oozes near continental margins may include terrestrially derived silica particles and sponge spicules. Siliceous oozes are composed of skeletons made from opal silica Si(O2), as opposed to calcareous oozes, which are made from skeletons of calcium carbonate organisms (i.e. coccolithophores). Silica (Si) is a bioessential element and is efficiently recycled in the marine environment through the silica cycle. Distance from land masses, water depth and ocean fertility are all factors that affect the opal silica content in seawater and the presence of siliceous oozes.

The Radiolarian Series is an album project by experimental jazz fusion trio Medeski Martin & Wood released in three installments in 2008–2009.

Syndinium is a cosmopolitan genus of parasitic dinoflagellates that infest and kill marine planktonic species of copepods and radiolarians. Syndinium belongs to order Syndiniales, a candidate for the currently uncultured group I and II marine alveolates. The lifecycle of Syndinium is currently not well understood beyond the parasitic and zoospore stages.

Hemipelagic sediment, or hemipelagite, is a type of marine sediment that consists of clay and silt-sized grains that are terrigenous and some biogenic material derived from the landmass nearest the deposits or from organisms living in the water. Hemipelagic sediments are deposited on continental shelves and continental rises, and differ from pelagic sediment compositionally. Pelagic sediment is composed of primarily biogenic material from organisms living in the water column or on the seafloor and contains little to no terrigenous material. Terrigenous material includes minerals from the lithosphere like feldspar or quartz. Volcanism on land, wind blown sediments as well as particulates discharged from rivers can contribute to Hemipelagic deposits. These deposits can be used to qualify climatic changes and identify changes in sediment provenances.

Spumellaria is an order of radiolarians in the class Polycystinea.

Nassellaria is an order of Rhizaria belonging to the class Radiolaria. The organisms of this order are characterized by a skeleton cross link with a cone or ring.

Cladococcus viminalis is a species of radiolarians.

The genus Stylodictya belongs to a group of organisms called the Radiolaria. Radiolarians are amoeboid protists found as zooplankton in oceans around the world and are typically identified by their ornate skeletons.