Sri Trivikrama Panditacharya (c.1258 - c.1320), was an Indian scholar and one of the disciples of Sri Madhvacharya, the great Dvaita philosopher. [2] He composed the Vayu Stuti, one of the most famous Stotras in the Madhva tradition. [1]

Sri Trivikrama Panditacharya was a scholar even in his young days and even before he was converted as a Madhwa he had written a Sanskrit mahakavya called "Ushaharana" mahakavya. [3]

Sri Trivikrama Panditacharya was the teacher of the King of Kasaragod called Jayasimha. Once when Sri Madhvacharya visited Kasaragod, he challenged Sri Madhva to a debate, as he believed in the Advaita tradition. [1] The debate lasted for 7–8 days and in the end, he accepted Sri Madhva's philosophy and became his disciple. He also composed a book called Tatva pradeepika, which is a commentary of Sri Madhvacharya's Brahma Sutra Bhashya. [1]

Trikirama Pandita composed a kaavya 'Ushaharana' in his teenage. There have been others works accredited to Panditacharya, of which a book called Tattvapradeepa, which is a commentary of Sri Madhvacharya's Brahma Sutra Bhashya and Vayu Stuti are most notable. [1] The attributed works are: [1]

Tattvavada, is a sub-school in the Vedanta tradition of Hindu philosophy. Alternatively known as Bhedavāda, Bimbapratibimbavāda, Pūrnabrahmavāda and Svatantra-Advitiya-Brahmavāda, the Dvaita Vedanta sub-school was founded by the 13th-century scholar Madhvacharya. The Dvaita Vedanta school believes that God and the individual souls (jīvātman) exist as independent realities, and these are distinct, being said that Vishnu (Narayana) is independent, and souls are dependent on him. The Dvaita school contrasts with the other two major sub-schools of Vedanta, the Advaita Vedanta of Adi Shankara which posits nondualism – that ultimate reality (Brahman) and human soul (Ātman) are identical and all reality is interconnected oneness, and Vishishtadvaita of Ramanuja which posits qualified nondualism – that ultimate reality (Brahman) and human soul are different but with the potential to be identical. Sanyasi's of Dvaita Vedanta order belongs ēkadaṇḍi tradition.

Madhvacharya, sometimes anglicised as Madhva Acharya, and also known as Purna Prajna and Ānanda Tīrtha, was a Hindu philosopher and the chief proponent of the Dvaita (dualism) school of Vedanta. Madhva called his philosophy Tattvavāda meaning "arguments from a realist viewpoint".

Vyāsatīrtha, also called Vyasaraja or Chandrikacharya, was a Hindu philosopher, scholar, polemicist, commentator and poet belonging to the Madhwacharya's Dvaita order of Vedanta. As the patron saint of the Vijayanagara Empire, Vyasatirtha was at the forefront of a golden age in Dvaita which saw new developments in dialectical thought, growth of the Haridasa literature under bards like Purandara Dasa and Kanaka Dasa and an amplified spread of Dvaita across the subcontinent. Three of his polemically themed doxographical works Nyayamruta, Tatparya Chandrika and Tarka Tandava documented and critiqued an encyclopaedic range of sub-philosophies in Advaita, Visistadvaita, Mahayana Buddhism, Mimamsa and Nyaya, revealing internal contradictions and fallacies. His Nyayamruta caused a significant stir in the Advaita community across the country requiring a rebuttal by Madhusudhana Saraswati through his text, Advaitasiddhi.

Narahari Tirtha was a Dvaita philosopher, scholar, statesman and one of the disciples of Madhvacharya. He is considered to be the progenitor of the Haridasa movement along with Sripadaraja. Though only two of his scholarly works are extant, they are characterised by their verbosity and lack of digressions. A few songs of his survive under the nom de plume Raghukulatilaka. As a minister of considerable influence to the Eastern Ganga rulers and later as the pontiff of Madhvacharya mutt, Narahari converted the Simhachalam temple into an educational establishment of renown and a religious centre for Vaishnavism.

Sumadhva Vijaya, is a biographical work of the great Dvaita philosopher Sri Madhvacharya. It is authored by Sri Narayana Panditacharya, who was the son of Sri Trivikrama Panditacharya, one of the direct disciples of Madhvacharya. Sri Trivikrama Panditacharya was a famous advaita exponent of his time and converted himself to the Madhva faith after disputation with Sri Madhvacharya himself for 7–8 days in Kasargod of Kerala. He is also the author of the famous "Vayu Stuti" which is recited by all devote Madhvas, daily, till date.

Sri Narayana Panditacharya, is an Indian scholar and philosopher in the Dvaita Vedānta tradition. He was the youngest son of Trivikrama Panditacharya, one of the direct disciples of Sri Madhva He is the author of Sri Madhva Vijaya, a metrical biography of the rejuvenator of the Dvaita school of philosophy, Sri Madhvacharya. Indologist B. N. K. Sharma writes, "Narayana has earned a lasting fame for himself by his great metrical biography of Madhva".

Over the years, there have been many philosophers, writers and other literary figures who have contributed to the Dvaita school of thought, founded by Sri Madhvacharya.

Padmanabha Tirtha was a Dvaita philosopher, scholar and the disciple of Madhvacharya. Ascending the pontifical seat after Madhva, he served as the primary commentator of his works and in doing so, significantly elucidated Madhva's terse and laconic style of writing. His pioneering efforts in expanding upon the Dvaita texts to uncover the underlying metaphysical intricacies was taken forward by the 14th Century philosopher, Jayatirtha. Padmanabha is also credited with disseminating the philosophy of Dvaita outside the Tulunadu.

Sadh Vaishnava Sampradaya or Sadh Vaishnavism, , also known as Bhagavata Sampradaya, Madhva Vaishnavism, is a denomination within the Vaishnavism tradition of Hinduism, founded by the thirteenth century philosopher Madhvacharya. It is a movement in Hinduism that developed during its classical period around the beginning of the Common Era. Philosophically, Madhva tradition is aligned with Dvaita Vedanta, and regards Madhvacharya as its founder or reformer.

Shri Uttaradi Math, is one of the premier monasteries (matha) founded by Madhvacharya to preserve and propagate Sanatana dharma and Dvaita Vedanta (Tattvavada) with Padmanabha Tirtha as its head. The Uttaradi Math is an important institution among the Madhvas and also deeply respected among the Vaishnavas and the other Hindus. Most of the Deshastha Madhvas and majority of Madhvas outside Tulu Nadu region are followers of this matha. Uttaradi Math has followers across Karnataka (outside Tulunadu region), Maharashtra, Andhra Pradesh, Telangana, Madhya Pradesh, Tamil Nadu and Bihar regions. 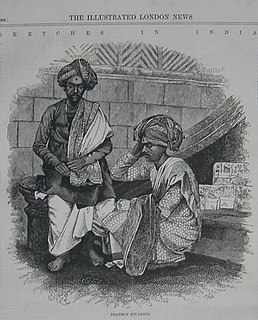 Vidyadhiraja Tirtha was a Hindu philosopher, dialectician and the seventh pontiff of Madhvacharya Peetha and served as peetadhipathi from.

Satyanatha Tirtha ; IAST:Śrī Satyanātha Tīrtha), also called Abhinava Vyasaraja, was a Hindu philosopher, scholar, theologian, logician and dialectician belonging to the Dvaita order of Vedanta. He served as the twentieth pontiff of Uttaradi Math from 1660 to 1673. He was a fiery and prolific writer and very ambitious of the glory of Dvaita Vedanta. He is considered to be one of the stalwarts in the history of the Dvaita school of thought, on account of his sound elucidations of the works of Madhvacharya, Jayatirtha and Vyasatirtha. Three of his polemically themed doxographical works are reminiscent of "Vyasatraya". His refutation work Abhinava Gada is a devastating criticism of Appayya's Madhvamathamukhamardhana. His independent treatise Abhinava Chandrika is considered a brilliant work relating to the Brahma Sūtras, being a commentary on Jayatirtha's Tattvaprakashika. His work Abhinava Tarka Tandava refuted the works of rival systems, especially those of Prabhākara of Mimamsa, Ramanuja's Visistadvaita, and Gangesha Upadhyaya, Raghunatha Siromani of the Nyaya school, on the same lines as Vyasatirtha's Tarka Tandava. Indologist B.N.K.Sharma wrote, "His energy and determination to crush out the rivalry of Monism is reflected even in the choice of the titles of some of his works, four of which go by the name "Paraśus" ". 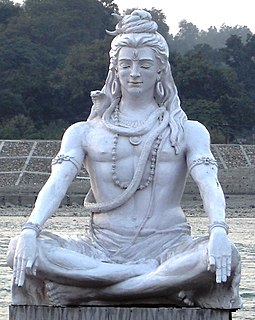 Chalari Narasimahacharya was an Indian Hindu scholar in the Dvaita Vedānta tradition. He is the follower of Uttaradi Math and the disciple of Satyanatha Tirtha.

In India, a digvijaya was originally a military conquest of the "four quarters." In medieaval times, it came to refer to the religious conquest of India by the reputed founders of the major Hindu renunciate traditions, namely Madhva, Sankara, Caitanya, and Vallabha.

Narasimha Nakha Stuti, is one of the most famous and short Stutis (poems) composed by Sri Madhvacharya in praise of nails of Lord Narasimha written in Sragdhara metre. Stuti means eulogy, singing praise, panegyric and to praise the virtues, deeds and nature of God by realising them in our hearts. In this stuti Madhvacharya eulogised the power of lord Narasimha and his nails. Indologist B. N. K. Sharma says, "According to tradition, Madhva composed these two verses and had them prefixed to his disciple's Vayu Stuti, extolling Madhva in his three 'incarnations', as he did not approve of the disciple's praising him, exclusively. They are now recited as part of the Vayu Stuti, at the beginning and at the end".