Trouble Is My Middle Name

"Trouble Is My Middle Name" is a song written by Neval Nader and John Gluck Jr, and released by Bobby Vinton in 1962. It spent nine weeks on the Billboard Hot 100 chart, peaking at No. 33, [3] while reaching No. 27 on the United Kingdom's New Musical Express chart, [4] and No. 7 on Billboard 's Middle-Road Singles chart. [5] [6]

"Take Good Care of My Baby" is a song written by Carole King and Gerry Goffin. The song was made famous by Bobby Vee, when it was released in 1961.

"Blue Velvet" is a popular song written and composed in 1950 by Bernie Wayne and Lee Morris. A top 20 hit for Tony Bennett in its original 1951 version, the song has since been re-recorded many times, with a 1963 version by Bobby Vinton reaching No. 1.

"To Know Him Is to Love Him" is a song written by Phil Spector, inspired by words on his father's tombstone, "To Know Him Was To Love Him." It was first recorded by the only vocal group of which he was a member, the Teddy Bears. Their recording spent three weeks at No. 1 on the Billboard Hot 100 chart in 1958, while reaching No. 2 on the UK Singles Chart chart. Peter & Gordon and Bobby Vinton later had hits with the song, with its title and lyrics changed to "To Know You Is to Love You". In 1987, the song was resurrected by Dolly Parton, Linda Ronstadt, and Emmylou Harris, whose Trio recording topped the U.S. country singles chart. The song is in 12/8 time.

"Mr. Lonely" is a song co-written and recorded by American singer Bobby Vinton. The song was first released on Vinton's 1962 album Roses Are Red.

"The Night Has a Thousand Eyes" is a song written by Benjamin Weisman, Dorothy Wayne, and Marilyn Garrett. It became a popular hit in 1962 for Bobby Vee and has had several cover versions over the years. 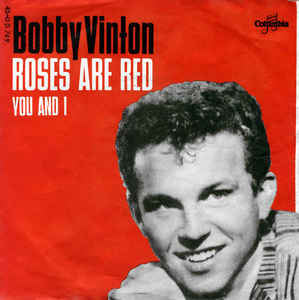 "Roses Are Red " is a popular song composed by Al Byron and Paul Evans. It was recorded by Bobby Vinton and was his first hit.

"There! I've Said It Again" is a popular song written by Redd Evans and David Mann, and popularized originally by Vaughn Monroe in 1945, and then again in late 1963 and early 1964 by Bobby Vinton. Vinton's version was the final number one song on the Hot 100 prior to the Beatles. The song charted at No. 1 on January 4, 1964 for four weeks.

"Ev'ry Day of My Life" is a popular song written in 1954 by Al Jacobs and Jimmie Crane.

"Tears" is a song written by lyricist Frank Capano and composer Billy Uhr, and was first recorded by Rudy Vallee in 1929. It was made famous in a version recorded by Ken Dodd, released as a 45 rpm single in 1965. It became a No. 1 hit in the UK Singles Chart. The song also reached number one on the Irish Singles Chart.

"Hurt" is a 1954 song by Jimmie Crane and Al Jacobs. "Hurt" was originally performed by Roy Hamilton, whose version peaked at number eight on the R&B Best Seller chart and spent a total of seven weeks on the chart. A version by Ricky Denell also received considerable radio airplay in 1954 on pop radio stations. The song is considered to be the signature hit of Timi Yuro, whose version went to number four on the Billboard pop chart in 1961. Juice Newton's 1985 version scored number one on Billboard's Country chart.

"The Days of Sand and Shovels" is a song written by Doyle Marsh and George Reneau, and recorded by American country music artist Waylon Jennings. It was released in April 1969 as the second single from his compilation album The Best of Waylon Jennings. The song peaked at number 20 on the Billboard Hot Country Singles chart. It also reached number 1 on the RPM Country Tracks chart in Canada.

"Blue on Blue" is a popular song composed by Burt Bacharach with lyrics by Hal David, first recorded by Bobby Vinton in 1963. Vinton's single spent 13 weeks on the Billboard Hot 100 chart, peaking at No. 3 on July 6, 1963, while reaching No. 2 on Billboard's Middle-Road Singles chart. Vinton's single was a major hit in many other nations as well. 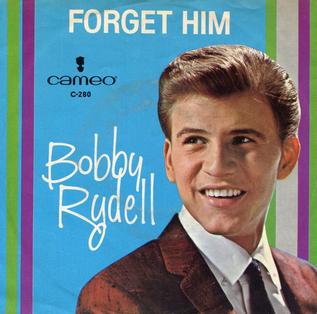 "Forget Him" is a song written by Tony Hatch and released in 1963 by Bobby Rydell. The song spent 16 weeks on the Billboard Hot 100 chart, peaking at No. 4 on January 18, 1964, while it spent 14 weeks on the United Kingdom's Record Retailer chart, reaching No. 13. The song also reached No. 3 on Billboard's Middle-Road Singles chart, No. 3 on Canada's CHUM Hit Parade, No. 8 on the Irish Singles Chart, and No. 2 in Hong Kong.

"Please Love Me Forever" is a song written by John Malone and Ollie Blanchard. The song was originally released by Tommy Edwards in 1958. Hit versions were later released by Cathy Jean and the Roommates in 1960 and Bobby Vinton in 1967.

"Just as Much as Ever" is a song written by Charles Singleton and Larry Coleman. The song was a hit single for Bob Beckham, Nat King Cole, and Bobby Vinton.

"My Heart Belongs to Only You" is a song written by Frank Daniels & Dorothy Daniels. Bette McLaurin and June Christy both released versions of the song in 1952. The most successful version of the song was released by Bobby Vinton in 1964.

"Long Lonely Nights" is a song that was originally released by Lee Andrews & the Hearts in 1957. Hit versions were also released by Clyde McPhatter, later in 1957, and Bobby Vinton in 1965. The song was written by Lee Andrews, though Larry Brown, Doug Henderson, and Mimi Uniman were given songwriter credit as well, in a practice that was common at the time.