Truant Officer Donald is an animated short film produced in Technicolor by Walt Disney Productions and released to theaters on August 1, 1941 by RKO Radio Pictures. [1] The film was nominated for an Academy Award for Best Animated Short Film in 1942 but lost to another Disney cartoon Lend a Paw .[ citation needed ] The story features Donald Duck working as a truant officer and making sure that Huey, Dewey, and Louie go to school. The film was directed by Jack King while Clarence Nash provided the voices of Donald and the nephews.

Huey, Dewey and Louie are enjoying a swim in the lake. But they are being watched by Truant Officer Donald Duck, as he believes that they are skipping school to have fun in the lake.

He captures the nephews and drives them to the schoolhouse in his truant officer van. While he endlessly goes on about the importance of a good education, the boys pull out their pocket knives, managing to cut themselves out of the van and make a run for it. Donald notices the back of his van is gone and he chases the boys to their clubhouse.

Donald tries numerous ways to get in, but each attempt fails miserably. In one attempt, he jacks up the clubhouse to load onto his van, but the boys manage to reverse the jack so it comes back down on top of Donald. He tunnels out and decides as a last resort to smoke the boys out. Meanwhile, inside the clubhouse, the boys are cooking three chickens over the fire when suddenly they notice smoke pouring in. They decide to beat Donald at his own game by putting the chickens in the bed and escape through the roof. Donald peeks inside to see if his ploy had worked, and is horrified to see the chickens in the bed. Donald is very beside himself as he thinks he cooked the nephews alive. Then, Huey disguises himself as an angel and is lowered into the clubhouse. He manages to kick Donald in the rear. The second one causes him to fall and his disguise falls off. Realizing that he has been tricked, Donald angrily beats up the trio and takes them to school.

But in a twist ending, as soon as they reach school, Donald is shocked when he sees a sign that says "NOTICE SCHOOL CLOSED FOR SUMMER HOLIDAYS". Donald realizes that his nephews weren't playing hooky like he thought, while also realizing that his intent to bring his nephews back to school was all for nothing. As such, the nephews give Donald an angry glare for what he did to them, and Donald literally shrinks from embarrassment over his mistake.

The cartoon was nomination for an Academy Award in 1942, but lost to another Disney cartoon, Lend a Paw starring Mickey Mouse and featuring Pluto. 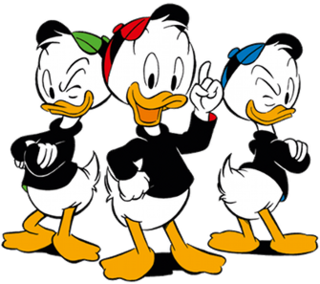 Huey, Dewey, and Louie are triplet cartoon characters created by writer Ted Osborne and cartoonist Al Taliaferro, and are owned by The Walt Disney Company. Huey, Dewey, and Louie are the nephews of Donald Duck, sons of Della Duck, the grand-nephews of Scrooge McDuck, and the friends of Webby Vanderquack. Like their maternal uncles, the brothers are anthropomorphic white ducks with yellow-orange bills and feet. They typically wear shirts and colorful baseball caps, which are sometimes used to distinguish them, since Louie always wears green, Huey wears red, and Dewey wears blue. Huey, Dewey, and Louie have made several animated appearances in both films and television, but comics remain their primary medium. The trio are collectively the 11th most published comic book characters in the world, and outside of the superhero genre, second only to their uncle Donald.

Trick or Treat is a 1952 animated short film produced by Walt Disney Productions and released by RKO Radio Pictures. The cartoon, which takes place on Halloween night, follows a series of pranks between Donald Duck and his nephews with Witch Hazel. The film was directed by Jack Hannah and features the voices of Clarence Nash as Donald and his nephews, and June Foray as Hazel.

Donald's Nephews (1938) is a Donald Duck animated cartoon which features Donald being visited by his three nephews, Huey, Dewey, and Louie. This cartoon is Huey, Dewey, and Louie's first appearance in animation. The short, and the three nephews, was the idea of Al Taliaferro, the artist for the Silly Symphony comic strip, which featured Donald Duck. The Walt Disney Productions Story Dept. on February 5, 1937, sent Taliaferro a memo recognizing him as the source of the idea for the planned short. Taliaferro subsequently introduced the nephews in his comic strip, which by this time had been renamed Donald Duck, on Sunday, October 17, 1937, beating the theatrical release of Donald's Nephews by almost six months.

Good Scouts is a 1938 American animated short film produced by Walt Disney Productions and released by RKO Radio Pictures. The cartoon follows Donald Duck leading his nephews Huey, Dewey, and Louie on a scouting trip through the wilderness. It was directed by Jack King and features Clarence Nash as Donald and the three nephews. 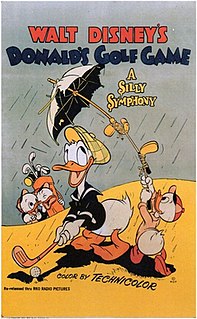 Donald's Golf Game is a cartoon released by the Walt Disney Company in 1938. Donald falters on the fairway while his caddies Huey, Dewey, and Louie all try to "tee" him off, with a grasshopper and a bag of trick clubs. 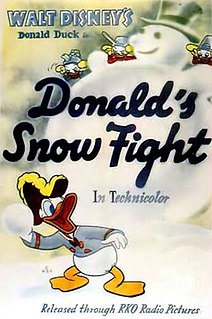 Donald's Snow Fight is an animated short film featuring classic cartoon character Donald Duck in a civil war-esque snowball fight with his nephews Huey, Dewey and Louie. It was released in 1942 by Walt Disney Productions. 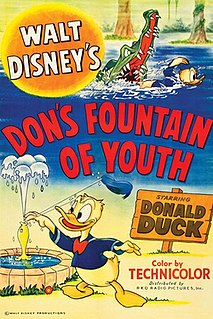 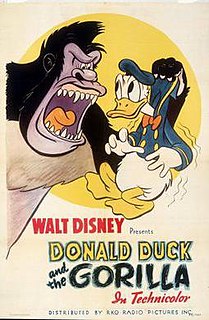 Donald Duck and the Gorilla is a Donald Duck short adventure horror and monster film which was originally released in 1944. It stars Donald Duck along with his three nephews; Huey, Dewey and Louie and Ajax, the killer gorilla. The 1930 Mickey Mouse cartoon The Gorilla Mystery has a similar plot involving a gorilla named Beppo who captures Minnie Mouse. 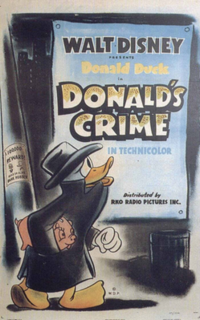 Donald's Crime is a 1945 American animated short film produced by Walt Disney Productions and released by RKO Radio Pictures. The cartoon, which parodies film noir crime dramas of the time, follows Donald Duck as he struggles with guilt after stealing $1.25 from his nephews. The film was directed by Jack King and features original music by Edward H. Plumb. The voice cast includes Clarence Nash as Donald, Huey, Dewey, and Louie, Gloria Blondell as Daisy Duck, and Sterling Holloway as the off-stage voice of Donald's conscience. This was Blondell's first performance as Daisy and marks the debut of the character's "normal" voice. Previously in Mr. Duck Steps Out, Daisy had been voiced by Nash using a voice similar to Donald's.

"Truant Officer Donald" is a 10-page Disney comics story written, drawn, and lettered by Carl Barks. Characters in the story include Donald Duck, his nephews Huey, Dewey and Louie, and the boys' schoolmates Butch and Finnegan. The story was first published in Walt Disney's Comics & Stories #100. The story has been reprinted several times since. 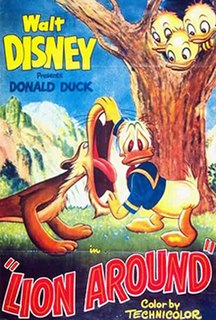 Soup's On is a 1948 Donald Duck animated short film directed by Jack Hannah, produced in Technicolor by Walt Disney Productions and released to theaters by RKO Radio Pictures. In the short, Donald cooks a turkey dinner for his nephews Huey, Dewey and Louie, but when they come to the table with dirty hands, he punishes them by sending them to bed. The nephews escalate the battle, and when Donald is knocked unconscious, they trick him into thinking that he has died and become an angel.

Fire Chief is a 1940 Disney cartoon starring Donald Duck and his nephews Huey, Dewey, and Louie. 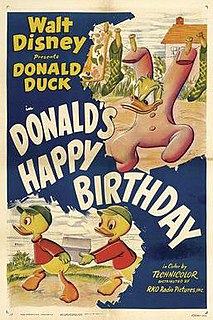 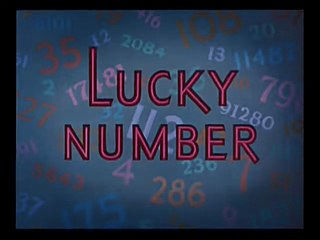 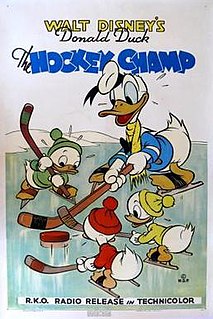 The Hockey Champ is a 1939 Donald Duck short film, produced in Technicolor and released by Walt Disney Productions. 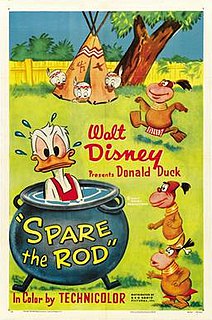 Spare the Rod is a 1954 American animated short film directed by Jack Hannah and produced by Walt Disney, featuring Donald Duck. In the short film, while Donald is doing yard work, his nephews are playing games instead of doing their chores. He is going to punish them, but the "voice of child psychology" convinces him to play along instead. This works well when they chop the wood to burn him at the stake. Meanwhile, however, a trio of Pygmy cannibals that escaped from the circus are out to do the very same thing to Donald with a cauldron of water...