"True Love" is a song by American musician and singer-songwriter Glenn Frey, a member of the Eagles. It was released as a single from his third studio solo album Soul Searchin' , in 1988. [1] The single features a ballad version of the track, "Working Man" as the B-side. An uptempo version was included on the album.

In the liner notes to the original album Glenn Frey wrote of the song "For those of you who have my previous albums, I apologize. I just can't shake my obsession with this Al Green-Memphis thing. Like Wilson Pickett says, 'Don't fight it'." 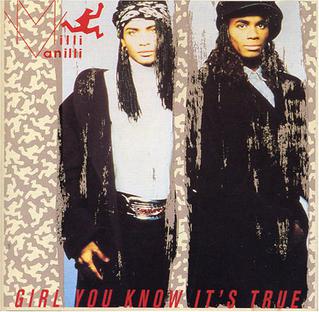 Girl You Know It's True is a 1989 album that served as the North American debut of German contemporary R&B duo Milli Vanilli. It is a version of Milli Vanilli's Europe-only release All or Nothing reconfigured and repackaged for the US market. 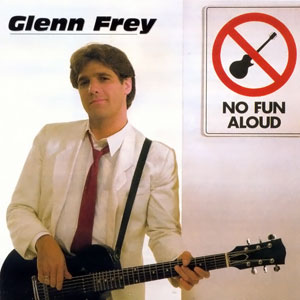 No Fun Aloud is the debut solo studio album by Glenn Frey. It was released in 1982 on Asylum.

The Allnighter is the second solo studio album by Glenn Frey, the guitarist and co-lead vocalist for the Eagles. The album was released in mid-1984 on MCA in the United States and the United Kingdom, two years after Frey's modestly successful debut album No Fun Aloud and four years after the demise of the Eagles. It was and still is Frey's most successful solo album throughout his whole solo career, having reached No. 22 on the Billboard charts, and releasing two top 20 singles with "Smuggler's Blues" and "Sexy Girl". The album achieved gold status by the RIAA in the US. It is generally regarded as the culmination of the smoother, more adult-oriented sound of Frey's solo work.

Soul Searchin' is the third solo studio album by Glenn Frey, the guitarist and co-lead vocalist for the Eagles. The album was released on August 15, 1988 on MCA in the United States and the United Kingdom, four years after Frey's successful album, The Allnighter and eight years after the demise of the Eagles. The album features eight original songs co-written by Frey with Jack Tempchin and the song "Two Hearts" contributed by Frey's friend, Hawk Wolinski. The album also features contributions from fellow Eagles member Timothy B. Schmit, Max Carl, Robbie Buchanan, Michael Landau, and Bruce Gaitsch. 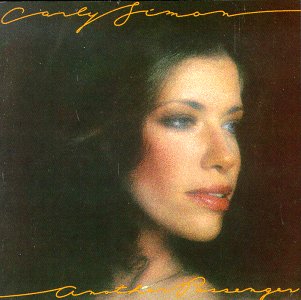 Another Passenger is the sixth studio album by American singer-songwriter Carly Simon, released by Elektra Records, on June 5, 1976. 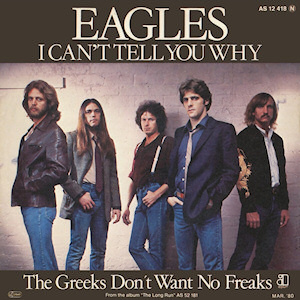 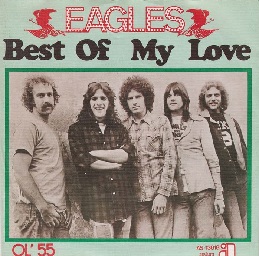 "Best of My Love" is a song written by Don Henley, Glenn Frey, and J. D. Souther. It was originally recorded by the Eagles, and included on their 1974 album On the Border. The song was released as the third single from the album, and it became the band's first Billboard Hot 100 number 1 single in March 1975. The song also topped the easy listening chart for one week a month earlier. Billboard ranked it as the number 12 song for 1975. 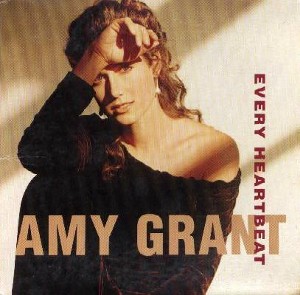 "Every Heartbeat" is a 1991 single by American Christian singer Amy Grant. It was released as the third single from the Heart in Motion album, though it was the second from the album to be released to mainstream pop radio. It reached the No. 2 spot on the US Billboard Hot 100 and the Adult Contemporary chart for one and six weeks, respectively. Charlie Peacock wrote the song's music and chorus lyrics, with Grant and Wayne Kirkpatrick composing the remaining lyrics. 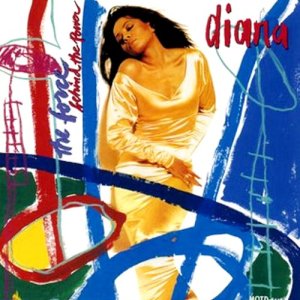 The Force Behind the Power is the nineteenth studio album by American singer Diana Ross, released on September 10, 1991 by Motown Records. The album reached No. 11 on the UK Albums chart.

"Heartache Tonight" is a song written by Don Henley, Glenn Frey, Bob Seger and J. D. Souther, recorded by the Eagles and features Glenn Frey on lead vocals. The track was included on their album The Long Run and released as a single in 1979. It reached No. 1 on the U.S. Billboard Hot 100 in November of that year and was certified Platinum by the Recording Industry Association of America representing one million copies sold. It was the Eagles' final chart-topping song on the Hot 100. 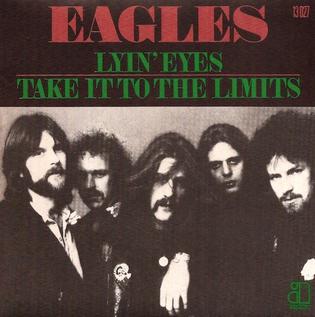 "Take It to the Limit" is a song by the Eagles from their fourth album One of These Nights from which it was issued as the third single on November 15, 1975. It reached No. 4 on the U.S. Billboard Hot 100 and was also the Eagles' greatest success to that point in the UK, going to No. 12 on the charts. Billboard ranked it as the No. 25 song for 1976. 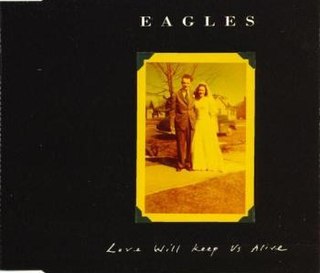 "Love Will Keep Us Alive" is a song written by Jim Capaldi, Paul Carrack, and Peter Vale and produced by the Eagles, Elliot Scheiner, and Rob Jacobs. It was first performed by the Eagles in 1994, during their Hell Freezes Over reunion tour, with lead vocals by bassist Timothy B. Schmit. This is the last single to feature Don Felder, who was terminated from the band in 2001. 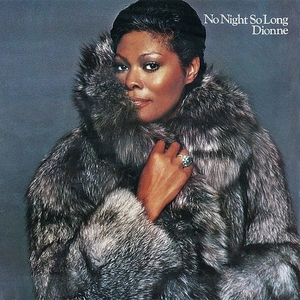 No Night So Long is a studio album by American singer Dionne Warwick. It was released by Arista Records on July 18 in the United States. Her second album for the label, Warwick worked with producer Steve Buckingham on the album which was recorded during the spring of 1980.

Young Man is the debut album of American country music artist Billy Dean, released in 1990 by Capitol Nashville. It produced two hit singles: "Only Here for a Little While" and "Somewhere in My Broken Heart". Both of these songs peaked at #3 on the Billboard Hot Country Singles & Tracks charts, with the latter also reaching #18 on the Hot Adult Contemporary Tracks charts in both the United States and Canada. The album has been certified gold by the RIAA for U.S. sales of 500,000 copies. 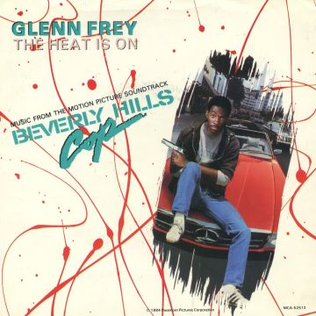 "The Heat Is On" is a song written by Harold Faltermeyer and Keith Forsey, and recorded by Glenn Frey for the American film Beverly Hills Cop (1984). The song was published as a single and as the sixth track of the album Beverly Hills Cop: Original Motion Picture Soundtrack (1984). 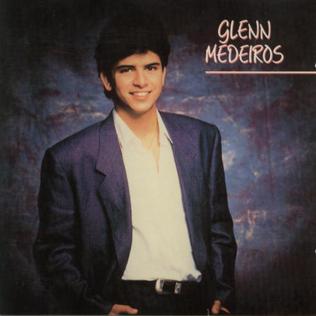 Glenn Medeiros is the self-titled debut album by American singer Glenn Medeiros, released in 1987. The album includes his cover version of George Benson's "Nothing's Gonna Change My Love for You", which was a massive worldwide hit, reaching #12 on the Billboard Hot 100 and spent four weeks at number one on the UK Singles Chart in July 1988. 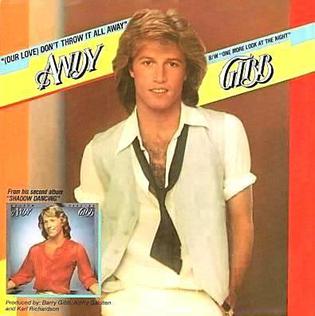 "(Our Love) Don't Throw It All Away" is a song penned by Barry Gibb and Blue Weaver and recorded by the Bee Gees in 1977 on the Saturday Night Fever sessions but was not released until Bee Gees Greatest (1979). A different version was released in September 1978 as the third single by Andy Gibb from his second studio album Shadow Dancing. 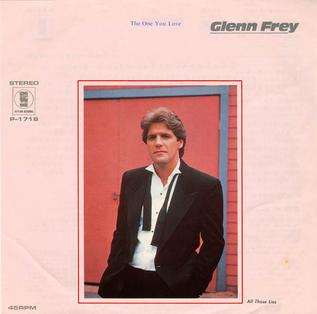 "The One You Love" is a song by American musician and singer-songwriter Glenn Frey, most famous as singer and guitarist for the Eagles. It was released as the lead single from his debut solo album No Fun Aloud, in 1982. Ernie Watts and Jim Horn are featured on the tenor saxophone. Watts plays the repeating theme, while Horn plays the closing solo. The single features the track, "All Those Lies", as the B-side, which is also included in the album.

"Soul Searchin'" is a song by American musician and singer-songwriter Glenn Frey, a member of the Eagles. It was released as a single from his third studio solo album Soul Searchin', in 1989. The single features the non-album track, "It's Cold in Here" as the B-side, which was also released as a bonus track on compact disc release of the album.