The Trustee Act 1925 (c 19) is an Act of Parliament of the United Kingdom passed on 9 April 1925, which codified and updated the regulation of trustees' powers and appointment. It accompanied the land reform legislation of the 1920s. It came into effect on 1 January 1926.

"An Act to consolidate certain enactments relating to trustees in England and Wales." [1]

There is a discretionary power available to the courts under this section which allows a trustee's personal liability for a breach of trust to be lifted if it appears to the court that the trustee "has acted honestly and reasonably, and ought fairly to be excused for the breach of trust and for omitting to obtain the directions of the court in the matter in which he committed such breach". The trustee could be relieved from personal liability "either wholly or partly". [2]

The Statute of Frauds (1677) is an Act of the Parliament of England. It required that certain types of contracts, wills, and grants, and assignment or surrender of leases or interest in real property must be in writing and signed to avoid fraud on the court by perjury and subornation of perjury. It also required that documents of the courts be signed and dated.

English trust law concerns the protection of assets, usually when they are held by one party for another's benefit. Trusts were a creation of the English law of property and obligations, and share a subsequent history with countries across the Commonwealth and the United States. Trusts developed when claimants in property disputes were dissatisfied with the common law courts and petitioned the King for a just and equitable result. On the King's behalf, the Lord Chancellor developed a parallel justice system in the Court of Chancery, commonly referred as equity. Historically, trusts have mostly been used where people have left money in a will, or created family settlements, charities, or some types of business venture. After the Judicature Act 1873, England's courts of equity and common law were merged, and equitable principles took precedence. Today, trusts play an important role in financial investment, especially in unit trusts and in pension trusts. Although people are generally free to set the terms of trusts in any way they like, there is growing legislation to protect beneficiaries or regulate the trust relationship, including the Trustee Act 1925, Trustee Investments Act 1961, Recognition of Trusts Act 1987, Financial Services and Markets Act 2000, Trustee Act 2000, Pensions Act 1995, Pensions Act 2004 and Charities Act 2011.

The Law of Property Act 1925 is a statute of the United Kingdom Parliament. It forms part of an interrelated programme of legislation introduced by Lord Chancellor Lord Birkenhead between 1922 and 1925. The programme was intended to modernise the English law of real property. The Act deals principally with the transfer of freehold or leasehold land by deed.

The Trusts of Land and Appointment of Trustees Act 1996, usually called "TLATA" or "TOLATA", is an Act of Parliament of the United Kingdom, which altered the law in relation to trusts of land in England, Wales, Scotland and Northern Ireland.

Charles Christopher James Mitchell QC (Hon) is a British legal scholar acknowledged as one of the leading common-law experts on the English law of restitution of unjust enrichment and the law of trusts. He is the author of two leading textbooks and one practitioner's book. He is currently Professor of Law at University College London and Senior Associate Research Fellow at the Institute of Advanced Legal Studies.

The history of English land law can be traced for eons, into Roman times, and through the Early Middle Ages under post-Roman chieftains and Saxon monarchs where, as for most of human history, land was the dominant source of personal wealth. English land law transformed further from the Saxon days, to post-Norman Invasion feudal encastellation, from the Industrial Revolution and over the 19th century, as the political power of the landed aristocracy diminished, and modern legislation increasingly made land a social form of wealth, subject to extensive social regulation, such as for housing, national parks, and agriculture.

City of London Building Society v Flegg[1987] UKHL 6 is an English land law case decided in the House of Lords on the relationship between potential overriding interests and the concept of overreaching.

Eva Zofia Lomnicka is a Professor of Law at King's College London School of Law. She contributes to a number of leading texts and is an expert on the law of consumer credit and financial services law more generally. She also maintains practice as a Barrister.

The Trustee Act 2000 is an Act of the Parliament of the United Kingdom that regulates the duties of trustees in English trust law. Reform in these areas had been advised as early as 1982, and finally came about through the Trustee Bill 2000, based on the Law Commission's 1999 report "Trustees' Powers and Duties", which was introduced to the House of Lords in January 2000. The bill received the Royal Assent on 23 November 2000 and came into force on 1 February 2001 through the Trustee Act 2000 (Commencement) Order 2001, a Statutory Instrument, with the Act having effect over England and Wales.

The Liability of trustees inter se in English law governs in what circumstances and to what extent a trustee in English trust law is liable for the acts and defaults of their co-trustees under English Law. In general trustees are under a duty to act jointly and have authority to act individually only if the trust instrument so provides. In principle therefore each trustee has an equal say in the management of the trust property and therefore in the event of a breach the trustees are jointly and severally liable for their actions.

Dishonest assistance, or knowing assistance, is a type of third party liability under English trust law. It is usually seen as one of two liabilities established in Barnes v Addy, the other one being knowing receipt. To be liable for dishonest assistance, there must be a breach of trust or fiduciary duty by someone other than the defendant, the defendant must have helped that person in the breach, and the defendant must have a dishonest state of mind. The liability itself is well established, but the mental element of dishonesty is subject to considerable controversy which sprang from the House of Lords case Twinsectra Ltd v Yardley.

English land law is the law of real property in England and Wales. Because of its heavy historical and social significance, land is usually seen as the most important part of English property law. Ownership of land has its roots in the feudal system established by William the Conqueror after 1066, and with a gradually diminishing aristocratic presence, now sees a large number of owners playing in an active market for real estate. The modern law's sources derive from the old courts of common law and equity, along with legislation such as the Law of Property Act 1925, the Settled Land Act 1925, the Land Charges Act 1972, the Trusts of Land and Appointment of Trustees Act 1996 and the Land Registration Act 2002. At its core, English land law involves the acquisition, content and priority of rights and obligations among people with interests in land. Having a property right in land, as opposed to a contractual or some other personal right, matters because it creates privileges over other people's claims, particularly if the land is sold on, the possessor goes insolvent, or when claiming various remedies, like specific performance, in court.

Futter v HM Revenue and Customs [2013] UKSC 26 is an English trusts law case, concerning the fiduciary duty to take into account relevant factors, and disregard irrelevant factors. It held that trustees who act on professional advice do not breach this duty, and that even if they do, the failure to have proper regard to relevant matters only ever renders a transaction voidable. For a transaction to be wholly set aside, as in common mistake, a decision by a trustee must be based on a truly "basic" mistake. 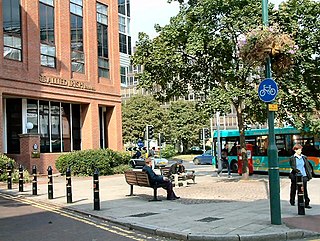 AIB Group (UK) plc v Mark Redler & Co Solicitors [2014] UKSC 58 is an English trust law case, concerning the applicable principles of causation for a breach of trust. It held that a "but for" test of causation applies for equitable compensation.