Truth: Red, White & Black is a seven-issue comic book limited series written by Robert Morales, drawn by Kyle Baker and published by Marvel Comics. The series focuses on Isaiah Bradley, one of 300 African American soldiers experimented on by the US Army in an attempt to create super soldiers. Elements of Truth are adapted for the Disney+ series The Falcon and the Winter Soldier , set in the Marvel Cinematic Universe.

The trade paperback collecting the series was published in February 2004 [9] and the hardcover in 2009. The book version of Truth contains Morales's appendix in which he clarifies myth, history and imagination and provides sources for his story. [10]

The original concept for the character came from an offhand comment by Marvel's publisher, Bill Jemas. [11] Axel Alonso was taken by the idea "inherent of politics of wrapping a Black man in red, white, and blue" and "a larger story ... a metaphor of America itself"; he also immediately thought of the Tuskegee Study. [11] In a meeting involving Joe Quesada, [12] Alonso proceeded to pitch the idea to Robert Morales, who was brought in to write the story and create the supporting cast and the ending. [11] The idea of an African American Captain America made Morales laugh, but, once he heard the premise, he found it depressing. [11] He says he "wrote a proposal that was so staggeringly depressing I was certain they'd turn it down. But they didn't." [12]

Morales originally envisioned the character as a scientist who experimented on himself, a reference to Silver Age scientists Reed Richards and Bruce Banner; however, Marvel wanted a more explicit reference to the Tuskegee Syphilis Study. [11] Morales was able to push through an ending in which Bradley suffered brain damage, a reference to Muhammad Ali that gave the character a tragic ending. [11] Morales performed extensive research into the time period, which he balanced with editorial suggestions. [11] Bradley's strong marriage came from an unsuccessful Luke Cage proposal by Brian Azzarello.

Set in the Marvel Universe, the series takes the Tuskegee Experiments as inspiration for a tale that re-examines the history of the super-soldier serum that created Captain America. [12] Beginning in 1942, the series follows a regiment of black soldiers who are forced to act as test subjects in a program that would become the prototype for the formula used to turn Steve Rogers into Captain America. The experiments lead to mutation and death, until only one remains: Isaiah Bradley.

In Super Black: American Pop Culture and Black Superheroes, Adilifu Nama notes that "Truth admonished the reader to incorporate the experiences and histories of black folk that paint a different picture of the cost and quest for freedom and democracy in America." [13]

Axel Alonso felt some of the criticism for this series came from "outright racists who just don't like the idea of a black man in the Cap uniform." [12]

In an interview with Comic Book Resources, he recalled:

When we posted our first image of Isaiah Bradley – the silhouette of an African American man in a Captain America costume – the media latched onto it as a story of interest, but a lot of internet folks lined up against it, assuming, for whatever reason, that it would disparage the legacy of Steve Rogers. By the time the story was done, the dialog around the series had substantially changed. One high-profile reviewer even wrote a column admitting he'd unfairly pre-judged the series, that he now saw it was about building bridges between people, not burning them – which I deeply respected. It's especially meaningful when you edit a story that functions as a little more than pure entertainment. [14]

Weapon Plus is a fictional clandestine program appearing in American comic books published by Marvel Comics. It was created by Grant Morrison during their run in New X-Men. The program's purpose is the creation of super-soldiers intended to fight the wars of the future, especially a mutant-human war. Weapon X, the organization's most well-known program, was originally the tenth installation, but eventually it branched off and became an independent program with similar purposes. Morrison's introduction of Weapon Plus also shed new information about the origins of Weapon X, Captain America and other Marvel Comics supersoldiers. 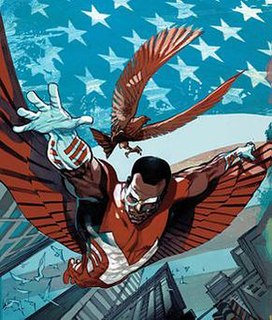 Falcon is a fictional superhero appearing in American comic books published by Marvel Comics. The character was introduced by writer-editor Stan Lee and artist Gene Colan in Captain America #117, and was the first African-American superhero in mainstream comic books.

Patriot is the name of four fictional superheroes appearing in American comic books published by Marvel Comics. These include the Golden Age hero Jeffrey Mace and the modern-day characters Eli Bradley and Rayshaun Lucas. 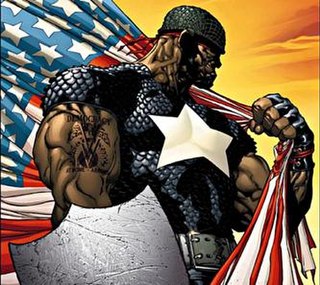 Isaiah Bradley is a fictional character, and one of the superheroes to hold the title of Captain America, appearing in American comic books published by Marvel Comics. The character is depicted as an early product of the United States' Super Soldier program during World War II. 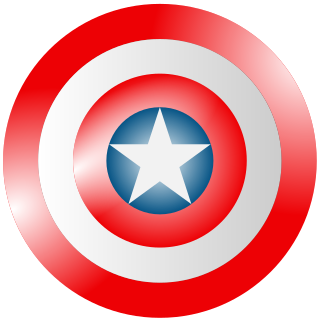 The Crew was the name of two short-lived comic book series published by Marvel Comics. Both series involved teams of primarily black superheroes banding together in New York City to fight injustice. 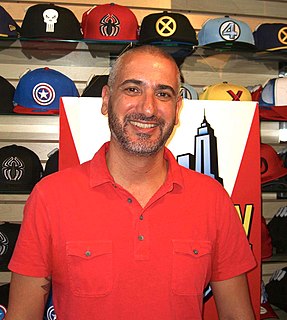 Axel Alonso is an American comic book creator and former journalist, best known as the former Editor-in-Chief at Marvel Comics, a role which he held from January 2011 until November 2017. Alonso began his career as a journalist for New York's Daily News. He later worked as an editor at DC Comics from 1994 to 2000, during which he edited a number of books published under their Vertigo line, such as Doom Patrol, Animal Man, Hellblazer, Preacher and 100 Bullets. In 2000 he went to work for Marvel Comics as a Senior Editor. While there he edited Spider-Man and X-Men-related books before ascending to vice president, Executive Editor in 2010, and Editor-in-Chief in January 2011, replacing Joe Quesada. He has also worked as a writer and inker. 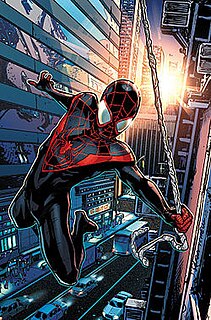 Miles Gonzalo Morales is a fictional superhero appearing in publications by the American publisher Marvel Comics, and is one of the characters known as Spider-Man. The character was created in 2011 by writer Brian Michael Bendis and Italian artist Sara Pichelli, with input by Marvel's then-editor-in-chief Axel Alonso.

James Buchanan "Bucky" Barnes Jr. is a fictional character appearing in American comic books published by Marvel Comics. Originally introduced as a sidekick to Captain America, the character was created by Joe Simon and Jack Kirby and first appeared in Captain America Comics #1. Barnes' original costume and the Bucky nickname has been used by other heroes in the Marvel Universe over the years. The character is brought back from supposed death as the brainwashed assassin cyborg called Winter Soldier. The character's memories and personality are later restored, leading him to become a dark hero in search of redemption. He temporarily assumes the role of "Captain America" when Steve Rogers was presumed to be dead. During the 2011 crossover Fear Itself, Barnes is injected with the Infinity Formula, which increases his natural vitality and physical traits in a way that is similar to the super-soldier serum used on Captain America.

The Falcon and the Winter Soldier is an American television miniseries created by Malcolm Spellman for the streaming service Disney+, based on Marvel Comics featuring the characters Sam Wilson / Falcon and Bucky Barnes / Winter Soldier. Set in the Marvel Cinematic Universe (MCU), it shares continuity with the films of the franchise and takes place after the events of the film Avengers: Endgame (2019). The series was produced by Marvel Studios, with Spellman serving as head writer and Kari Skogland directing.

Captain America: White is a six-issue Marvel Comics limited series written by Jeph Loeb and illustrated by Tim Sale. An homage to Captain America comics from the Golden Age of Comic Books, the series focuses on the relationship between Steve Rogers and his sidekick Bucky Barnes. It is the fourth comic in Loeb's and Sale's "Color" series, following Daredevil: Yellow, Spider-Man: Blue, and Hulk: Gray. The series is noted for its extensive production delays, with seven years elapsing between the release of the first and second issues.

James Buchanan Barnes, more commonly known as Bucky Barnes, is a fictional character portrayed by Sebastian Stan in the Marvel Cinematic Universe (MCU) film franchise, based on the Marvel Comics character of the same name and sometimes referred to by his alter ego, the Winter Soldier, and later as the White Wolf. In the films, Barnes is childhood best friends with Steve Rogers who serves alongside him during World War II before being transformed into a brainwashed Hydra supersoldier and assassin, the Winter Soldier, he is eventually cured of his programming in Wakanda. He later partners with Sam Wilson after Rogers' retirement, supporting him as the new Captain America.

Robert Morales was an American comic book writer, editor, and journalist known for creating Truth: Red, White & Black, which featured his original character Isaiah Bradley. In addition to creating comics for Marvel Comics, Morales was an editor at Vibe Magazine and Reflex magazine throughout the 1990s and 2000s.

"The Star-Spangled Man" is the second episode of the American television miniseries The Falcon and the Winter Soldier, based on Marvel Comics featuring the characters Sam Wilson / Falcon and Bucky Barnes / Winter Soldier. It follows the pair as they reluctantly work together to track the anti-nationalist organization the Flag Smashers. The episode is set in the Marvel Cinematic Universe (MCU), sharing continuity with the films of the franchise. It was written by Michael Kastelein and directed by Kari Skogland.

"Truth" is the fifth episode of the American television miniseries The Falcon and the Winter Soldier, based on Marvel Comics featuring the characters Sam Wilson / Falcon and Bucky Barnes / Winter Soldier. It follows the pair as they return home after fighting with the Flag Smashers, while John Walker faces consequences for his actions. The episode is set in the Marvel Cinematic Universe (MCU), sharing continuity with the films of the franchise. It was written by Dalan Mussan and directed by Kari Skogland.