Trygve Johannessen (born 11 January 1953) is a Norwegian former professional footballer who played as a forward. He is best known for his time at Viking, with whom he won four league titles and one cup between 1974 and 1982. He scored a total of 181 goals in 312 games for Viking (these numbers include friendlies).

Johannessen had many youth caps when he moved from Florvåg to Viking in the summer of 1974. Viking paid somewhat less than 40,000 kr for the player, at a time when money was seen as taboo in Norwegian football. Johannessen played well to hold his place in the team, and was for many years Viking's top scorer. He became top goalscorer in the first division with 17 goals in 1977 and 11 goals in 1982.

After a couple of seasons in the reserves at Viking, Johannessen was sold to neighbours Vidar in 1981. Here he was an unrivalled success. In the course of a season, he scored 56 goals and helped Vidar to promotion to the Second Division. In 1982, he returned to Viking. He won his fifth title with the club and together with Ham-Kam's Tor Arne Granerud he was top scorer with eleven goals.

In 1983, he returned to Vidar again, where he stayed for two seasons. Over his three seasons with Vidar, Johannessen played 109 games and scored 124 goals (including friendlies). In his first ten years of his career, Johannessen scored a total of 305 goals for the two Stavanger clubs. In 1985, he played one season for Brann and scored eleven league goals.

Johannessen finished his football career in Florvåg IF, where he started it. He later became manager of many local clubs, such as Florvåg, Løv-Ham, Follese FK and Askøy FK.

Johannessen won five caps and seven youth caps. He made his international debut with the Norway national team against the Soviet Union on 24 September 1975. His other caps were Olympic qualifying matches in 1979.

Maurice Alexander Ross is a Scottish football player and coach, who is currently the manager of Cowdenbeath. 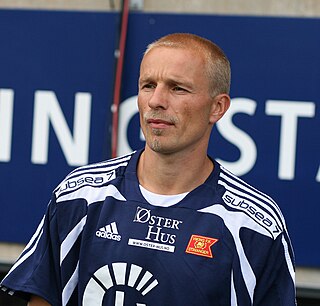 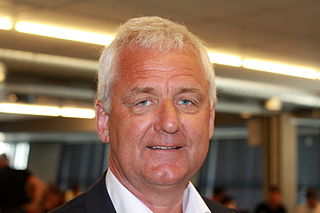 Karl Petter "Kalle" Løken is a Norwegian businessman and former footballer. He became the CEO of Kværner ASA in May 2018.

Johan Lædre Bjørdal is a former Norwegian footballer who plays as a centre back.

The 1982 1. divisjon was the 38th completed season of top division football in Norway.

Svein Fjælberg is a Norwegian former football defender. He played 11 seasons for the Norwegian club Viking, where he won the league twice as well as two cup titles. Fjælberg was capped 33 times for Norway. After his retirement he served as the assistant coach of Viking on three occasions. 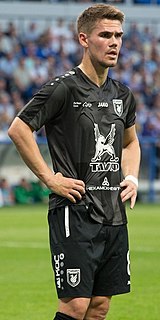 Viðar Örn Kjartansson is an Icelandic professional footballer who plays as a striker for Norwegian club Vålerenga IF.

Pål Alexander Kirkevold is a Norwegian professional footballer who plays as a forward for Stabæk. He has gained one cap for the Norway national team.