Last updated August 11, 2020
Norwegian footballer and coach
Not to be confused with Odd Bergh.

Berg played for Molde from 1968 to 1975. In 1973, he contributed to Molde's promotion to 1. divisjon, the first tier. He became the club's first ever first-tier top scorer by scoring 13 goals in the 1974 season, where Molde finished in second place and were awarded silver medals. Berg was capped twice for Norway under-21 in 1974. [3] He played half a season for Lyn in the 1976 season, before retiring from top level football. However, Berg kept on playing in lower leagues for several years.

Odd Berg was appointed head coach at Molde on 22 May 2003, after Gunder Bengtsson left the position. [4] Molde finished 9th in the 2003 season. At the end of the season, Reidar Vågnes replaced Berg as Molde's head coach. [5] Berg stated that he was disappointed by the club's decision, [5] but stayed at the club as assistant coach till the end of the 2005 season.

His brother is Jan Berg. Unlike his brother, Odd Berg was never capped for Norway. 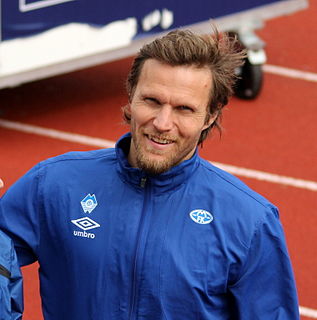 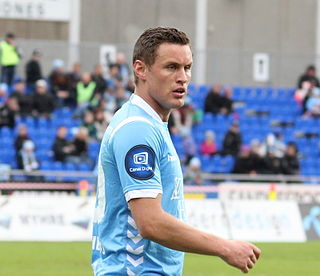 Tommy Høiland is a Norwegian footballer who plays as a striker for Eliteserien club Viking.

Christian Magnus Thim Michelsen is a Norwegian football coach and former player who is currently the head coach of Eliteserien club Kristiansund.

Stein Olav "Laffen" Hestad is a Norwegian former footballer. Hestad spent his entire playing career at Molde FK, where he previously had club record with 681 first-team matches, including 249 matches in the Norwegian top division. Unlike his brother, Harry, "Laffen" was never capped for Norway. 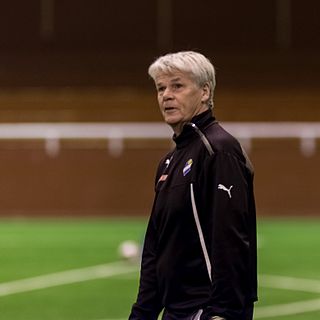 The 2018 Eliteserien was the 73rd completed season of top-tier football in Norway.

Odds Ballklubb, commonly known as Odd, is a Norwegian football club from Skien. Originally the football section of a multi-sports club, founded in 1894 nine years after the club's founding. All other sports than football were discontinued and the club became dedicated to football only. Odd plays in the Norwegian top division, Tippeligaen, and holds the record winning the Norwegian Football Cup the most times, the last coming in 2000. The club was known as Odd Grenland between 1994 and 2012. During the 2018 season the club will be participating in the Eliteserien and NM Cupen.

The 2020 Eliteserien is the 75th season of top-tier football in Norway.