Verdens Gang ("The course of the world"), generally known under the abbreviation VG, is a Norwegian tabloid newspaper. In 2016, circulation numbers stood at 93,883, having declined from a peak circulation of 390,510 in 2002. VG is nevertheless the most read online newspaper in Norway, with about 2 million daily readers. [1]

Verdens Gang AS is a private company wholly owned by the public company Schibsted ASA. [2] Somewhere between 30% and 60% of Schibsted is owned by international institutional investors such as Goldman Sachs and Northern Trust. [3] Norwegian owners held a mere 42% of the shares in Schibsted at the end of 2015; [4] VG is thus foreign-owned.

VG was established by members of the resistance movement shortly after the country was liberated from German occupation in 1945. [5] The first issue of the paper was published on 23 June 1945. [6] Christian A. R. Christensen was the first editor-in-chief of VG from its start in 1945 to 1967 when he died. [7]

VG is based in Oslo. [8] The paper is published in tabloid format. [9] The owner is the media conglomerate Schibsted, [7] which also owns Norway's largest newspaper, Aftenposten , [10] as well as newspapers in Sweden and Estonia and shares in some of Norway's larger regional newspapers. Schibsted took over the paper following the death of Christensen in 1967. [7] Just before the change in the ownership VG was mostly sold in the Oslo area and had a circulation of 34,000 copies. [11]

The editor-in-chief is Gard Steiro. [12] VG is not affiliated with any political party.

For many years, VG was the largest newspaper in Norway by circulation, which reached a peak of 390,000 in 2002. As its readers moved from the traditional newspaper to internet newspapers, the circulation has collapsed to 94,000 in 2016. VG is now the second largest print newspaper in Norway. It was overtaken by Aftenposten in 2010. The online newspaper vg.no is, however, by far the most visited in Norway, with 2 million daily readers. [13]

VG Nett is VG's news site online. It was started in 1995. [14] VG Nett made a net operating profit of 40 percent in 2006, making it an unusually successful online media operation. [15] According to figures from TNG Gallup, it had approximately 2 million daily readers in 2016. [16] 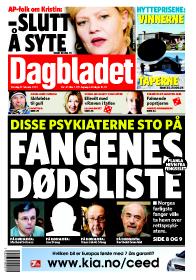 Dagbladet is one of Norway's largest newspapers and has 1,400,000 daily readers on mobile, web and paper. 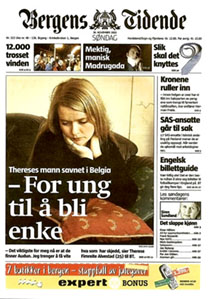 Einar Fredrik Åke Tinius Nagell-Erichsen was a Norwegian publisher, noted for his leadership of the Schibsted media conglomerate which includes the broadsheet newspaper Aftenposten and the tabloid Verdens gang.

Liv Løberg is a Norwegian practical nurse, a former politician for the Progress Party and a convicted felon. Her name came to mass media attention in Norway in June 2010 when it was revealed that she had forged her CV, this being accentuated by the fact that she was an office manager working at the Norwegian Registration Authority for Health Personnel (SAFH). On 24 April 2012, she was convicted of fraud and sentenced to 14 months in prison.

Mohyeldeen Mohammad is an Iraqi-Norwegian Islamist, and political activist associated with the fundamentalist Profetens Ummah group. He became a controversial figure in Norway after stating that the country is at war with Muslims and warning the Norwegian people with an 11 September happening on Norwegian soil. Since then, his media profile has risen following a series of statements regarding Norway, homosexuality and Islamism. He was formerly a Sharia student at the Islamic University of Madinah in Saudi Arabia, until he was deported from the country in 2011.

Torgrim Sørnes is a Norwegian physician, historian and author, who has written extensively on Norwegian social and forensic history.

Terrorism in Norway includes a list of major terrorist incidents where organized groups and lone wolves have tried carrying out attacks. In recent years, there has been a rise mostly of Islamist and far-right violence and various groups have been suspected of terrorism and terrorism plans.

Østerdølen is a local Norwegian newspaper published in Stor-Elvdal in Hedmark county.