Wirdnam Glacier is a glacier which drains the west slopes of the Royal Society Range between Mounts Moxley and Lisicky and flows west into Skelton Glacier. It was mapped by the United States Geological Survey from ground surveys and air photos, and named by the Advisory Committee on Antarctic Names for Squadron Leader K.A.C. Wirdnam, a RAF pilot stationed at McMurdo Station in 1960 as an observer, who also flew missions for U.S. Navy Squadron VX-6.

Brown Peninsula is a nearly ice-free peninsula, 10 nautical miles (19 km) long and 4 nautical miles (7 km) wide, which rises above the Ross Ice Shelf northward of Mount Discovery, to which it is connected by a low isthmus. It was discovered by the British National Antarctic Expedition, 1901–04, which named it "Brown Island" because of its color and its island-like character. Since it is a peninsula, the name has been altered accordingly.

Carlson Glacier is a glacier, 9 nautical miles (17 km) long, flowing northward from between Mount Edgell and the Relay Hills into Wordie Ice Shelf, Fallières Coast. It was photographed from the air by the U.S. Navy in 1966, and surveyed by the British Antarctic Survey between 1970 and 1973. It was named by the Advisory Committee on Antarctic Names after Captain Burford A. Carlson, U.S. Navy, Staff Meteorologist, Naval Support Force, Antarctica, Operation Deep Freeze, 1970 and 1971. 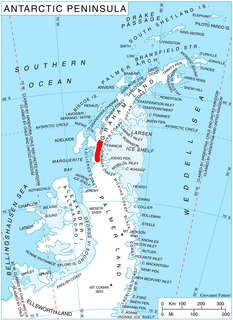 Neny Glacier is a glacier on the southwest side of Hemimont Plateau flowing northwest into the north part of Neny Fjord on the west side of Antarctic Peninsula. This feature together with Gibbs Glacier, which flows southeast, occupy a transverse depression between Neny Fjord and Mercator Ice Piedmont on the east side of Antarctic Peninsula. The name Neny Glacier, derived from association with Neny Fjord, was first used by the U.S. Antarctic Service, 1939–41, whose members used the glacier as a sledging route.

DeMaster Point is a point at the foot of Marshall Valley, Denton Hills, on the Scott Coast of Victoria Land. It was named by the Advisory Committee on Antarctic Names (1994) after Douglas P. DeMaster, a biologist at the University of Minnesota. He conducted seal studies at McMurdo Sound (1976–77), the South Shetland Islands (1977–78), and the Palmer Archipelago (1978–79).

Dilemma Glacier is a steep, broken glacier descending from the Worcester Range into the western side of Skelton Glacier to the north of Ant Hill, in New Zealand. It was mapped and named in 1957 by the New Zealand party of the Commonwealth Trans-Antarctic Expedition, 1956–58, and so named because of difficulties encountered by the geological party in an attempted descent of this glacier.

Tryne Bay is a bay about 3 nautical miles (6 km) wide at the northeast end of the Vestfold Hills, lying between the Tryne Islands and the coast. Charted by Norwegian cartographers from air photos taken by the Lars Christensen Expedition (1936–37) and named "Trynevika".

Peckham Glacier is a steep tributary glacier in the Britannia Range, flowing south from Mount McClintock into Byrd Glacier. Named by Advisory Committee on Antarctic Names (US-ACAN) for Verne E. Peckham, biologist, McMurdo Station winter party 1962, who with use of SCUBA gear made numerous dives under the sea ice of McMurdo Sound at Winter Quarters Bay and off Cape Evans.

Patton Glacier is a broad tributary glacier in the Sentinel Range, Ellsworth Mountains. It drains the east slope of the main ridge between Mounts Ostenso and Tyree, flows east-northeastwards between Evans Peak and Versinikia Peak on the north and Mount Bearskin on the south, and enters Ellen Glacier northeast of Zalmoxis Peak and southeast of Mount Jumper.

Lower Staircase is the lower, eastern portion of Skelton Glacier, between The Landing and Clinker Bluff in the Hillary Coast region of the Ross Dependency, Antarctica. It was surveyed and given this descriptive name in 1957 by the New Zealand party of the Commonwealth Trans-Antarctic Expedition, 1956–58.

Sirocco Glacier is a glacier about 3 nautical miles (6 km) long flowing north-northeast into West Bay, Fallières Coast, between Brindle Cliffs and Mount Edgell. Named by the United Kingdom Antarctic Place-Names Committee (UK-APC) in 1977 after the sirocco, the Italian name for the wind that blows from the Sahara. One of several features in the area named after winds.

Luncke Ridge is a fairly prominent ridge on the northern side of the eastern extremity of Langnes Fjord in the Vestfold Hills of Antarctica. It was mapped by Norwegian cartographers from air photos taken by the Lars Christensen Expedition, 1936–37. The ridge was seen in 1957 by an Australian National Antarctic Research Expeditions party and named for Bernhard Luncke, a Norwegian cartographer who plotted the Vestfold Hills area for the Hansen Atlas.

Vereyken Glacier is a glacier in Victoria Land, Antarctica. Together with the Morning Glacier, it drains the northeast slopes of Mount Morning. Vereyken Glacier flows north between Riviera Ridge and Hurricane Ridge into Koettlitz Glacier. It was named by the Advisory Committee on Antarctic Names (US-ACAN) (1994) after Jill Vereyken, ASA manager of Field Support Services at McMurdo Station, who was active in coordination and planning of science support in Antarctica from 1984.

Mount Ritchie is a mountain rising over 1600 m in the southeast part of Warren Range, Antarctica. The feature is 3 nautical miles (6 km) northeast of Wise Peak on the west side of Deception Glacier. Named by the Victoria University of Wellington Antarctic Expedition (VUWAE), 1970–71, after A. Ritchie, curator of fossils at the Australian Museum, Sydney, a member of the VUWAE party that discovered important sites of fossil fish in this Skelton Neve area.