Tshomlee Cabanos Go (born January 13, 1981 in Iriga, Camarines Sur) [1] is a taekwondo practitioner from the Philippines. He represented the country in the 2004 and 2008 Summer Olympics. [2]

Go and his family left the Philippines sometime in the early 2010s to migrate to California in the United States. As of 2020, he works as a captain for a ship of the San Francisco Bay Ferry service and as an instructor in a gymnasium in Vallejo. [3] 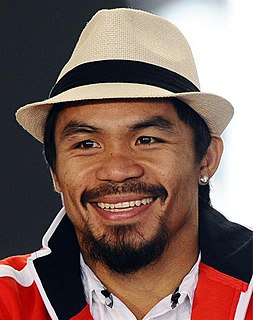 Emmanuel Dapidran Pacquiao Sr., is a Filipino professional boxer and politician. Nicknamed "PacMan", he is regarded as one of the greatest professional boxers of all time. He has been serving as a Senator of the Philippines since 2016, and previously served as party president of PDP–Laban (2020–2021), and Representative of Sarangani (2010–2016). 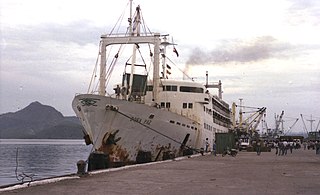 MV Doña Paz was a Japanese built and Philippine-registered passenger ferry that sank after colliding with the oil tanker Vector on December 20, 1987. Built by Onomichi Zosen of Hiroshima, Japan, the ship was launched on April 25, 1963 as the Himeyuri Maru, with a passenger capacity of 608. In October 1975, the Himeyuri Maru was bought by Sulpicio Lines and renamed as the Don Sulpicio. After a fire on board in June 1979, the ship was refurbished and renamed Doña Paz.

The Philippines competed at the 2008 Summer Olympics in Beijing, China. The country was represented by 15 athletes, 10 men and 5 women, who competed in 17 events across 8 sports.

MV Princess of the Stars was a ferry owned by Filipino shipping company Sulpicio Lines. She capsized on June 21, 2008, off the coast of San Fernando, Romblon, at the height of Typhoon Fengshen, which passed directly over Romblon as a Category 2 storm.

Eric Ang is a shooter from the Philippines. He represented the country in the 2008 Summer Olympics. He lost in the contention for any medal by placing 30th on the qualifying rounds for Men's Trap on the second day of the games.

Mary Antoinette Rivero, also known as Toni Rivero, is a taekwondo practitioner from the Philippines. She represented the country in the 2004 and 2008 Summer Olympics. Rivero was born in Makati.

Staff Sergeant Hidilyn Francisco Diaz is a Filipina weightlifter and airwoman, the first Filipino to ever win an Olympic gold medal for the Philippines. She is also an Olympic weightlifting record holder by winning the women's 55 kg category for weightlifting at the 2020 Summer Olympics.

Theodore Allison Nash II was an American competition rower and Olympic champion, rowing coach, and sports administrator. Nash represented his country, either as a coach or athlete, at eleven separate Olympic Games since 1960.

Stephan Markus Cabizares Schröck is a professional footballer who plays as a midfielder and captains both Filipino club United City and the Philippines national team. Although primarily a midfielder, earlier in his career he played mostly as a full-back and has also been deployed as a winger.

The Philippines competed at the 2012 Summer Olympics, which was held in London, from 27 July to 12 August 2012. This was the nation's twentieth appearance at the Olympics.

Gerardo Rosario is a Filipino former swimmer who has competed in the Summer Olympic Games.

Ryan Carneli is an Australian taekwondo practitioner. Carneli qualified for the men's 58 kg class at the 2008 Summer Olympics in Beijing, after winning the Oceania Qualification Tournament in Noumea, New Caledonia. He defeated Philippines' Tshomlee Go in the preliminary round of sixteen, before losing out the quarterfinal match to Thailand's Chutchawal Khawlaor, who was able to score two points at the end of the game.

Ferdinand "Bong" Pascual is a Filipino basketball referee who has officiated in the FIBA World Cup and the Summer Olympics. 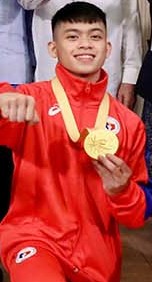 Carlos Edriel Yulo is a Filipino artistic gymnast who has won bronze and gold at the World Artistic Gymnastics Championships. He is the first Filipino and the first male Southeast Asian gymnast to win in the World Artistic Gymnastics Championships with his floor exercise bronze medal finish in 2018, and the first ever gold medal for the Philippines in 2019 on the same apparatus. This performance also qualified him to the 2020 Summer Olympics in Tokyo.

Ramón Solis is a Filipino weightlifter. He competed in the men's middle heavyweight event at the 1988 Summer Olympics. He has represented the Philippines internationally from 1975 to 1998. He has also competed at the 1998 Asian Games in the men's 105 kg event, although he didn't registered a mark.

Kurt Bryan Barbosa is a Filipino taekwondo athlete who competed in the 2020 Summer Olympics in Tokyo.