Tsukamurella carboxydivorans is a Gram-positive and carbon monoxide-oxidizing bacterium from the genus of Tsukamurella which has been isolated from soil near a road from Seoul in Korea. [1] [3] [4]

Combustion, or burning, is a high-temperature exothermic redox chemical reaction between a fuel and an oxidant, usually atmospheric oxygen, that produces oxidized, often gaseous products, in a mixture termed as smoke. Combustion does not always result in fire, because a flame is only visible when substances undergoing combustion vapourise, but when it does, a flame is a characteristic indicator of the reaction. While the activation energy must be overcome to initiate combustion, the heat from a flame may provide enough energy to make the reaction self-sustaining. Combustion is often a complicated sequence of elementary radical reactions. Solid fuels, such as wood and coal, first undergo endothermic pyrolysis to produce gaseous fuels whose combustion then supplies the heat required to produce more of them. Combustion is often hot enough that incandescent light in the form of either glowing or a flame is produced. A simple example can be seen in the combustion of hydrogen and oxygen into water vapor, a reaction commonly used to fuel rocket engines. This reaction releases 242 kJ/mol of heat and reduces the enthalpy accordingly : 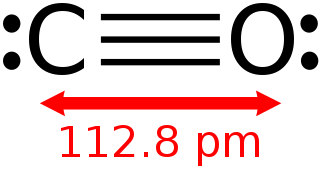 Carbon monoxide is a colorless, odorless, tasteless, flammable gas that is slightly less dense than air. Carbon monoxide consists of one carbon atom and one oxygen atom. It is the simplest molecule of the oxocarbon family. In coordination complexes the carbon monoxide ligand is called carbonyl.

The Swern oxidation, named after Daniel Swern, is a chemical reaction whereby a primary or secondary alcohol is oxidized to an aldehyde or ketone using oxalyl chloride, dimethyl sulfoxide (DMSO) and an organic base, such as triethylamine. It is one of the many oxidation reactions commonly referred to as 'activated DMSO' oxidations. The reaction is known for its mild character and wide tolerance of functional groups.

The Thermomicrobia is a group of thermophilic green non-sulfur bacteria. Based on species Thermomicrobium roseum and Sphaerobacter thermophilus, this bacteria class has the following description:

Phosphorus trifluoride (formula PF3), is a colorless and odorless gas. It is highly toxic and reacts slowly with water. Its main use is as a ligand in metal complexes. As a ligand, it parallels carbon monoxide in metal carbonyls, and indeed its toxicity is due to its binding with the iron in blood hemoglobin in a similar way to carbon monoxide.

Brevibacillus brevis is a Gram-positive, aerobic, motile, spore-forming, rod-shaped bacterium commonly found in soil, air, water, and decaying matter. It is rarely associated with infectious diseases. The antibiotics gramicidin and tyrocidine were first isolated from it. It produces β-cyclodextrin glucanotransferase, an enzyme that catalyzes the conversion, degradation, and cyclization of starch into β-cyclodextrin.

The Thaumarchaeota or Thaumarchaea are a phylum of the Archaea proposed in 2008 after the genome of Cenarchaeum symbiosum was sequenced and found to differ significantly from other members of the hyperthermophilic phylum Crenarchaeota. Three described species in addition to C. symbosium are Nitrosopumilus maritimus, Nitrososphaera viennensis, and Nitrososphaera gargensis. The phylum was proposed in 2008 based on phylogenetic data, such as the sequences of these organisms' ribosomal RNA genes, and the presence of a form of type I topoisomerase that was previously thought to be unique to the eukaryotes. This assignment was confirmed by further analysis published in 2010 that examined the genomes of the ammonia-oxidizing archaea Nitrosopumilus maritimus and Nitrososphaera gargensis, concluding that these species form a distinct lineage that includes Cenarchaeum symbiosum. The lipid crenarchaeol has been found only in Thaumarchaea, making it a potential biomarker for the phylum. Most organisms of this lineage thus far identified are chemolithoautotrophic ammonia-oxidizers and may play important roles in biogeochemical cycles, such as the nitrogen cycle and the carbon cycle. Metagenomic sequencing indicates that they constitute ~1% of the sea surface metagenome across many sites.

Thermosinus carboxydivorans is an anaerobic, thermophilic, Gram-negative, carbon-monoxide-oxidizing, hydrogenogenic bacterium, the type species of its genus. It is facultatively carboxydotrophic, curved, motile, rod-shaped, with a length of 2.6–3 μm, a width of about 0.5 μm and lateral flagellation. Its type strain is Nor1T.

Thermolithobacteria is a class of rod-shaped Gram-positive bacteria within phylum Firmicutes. Species within this class are thermophilic lithotrophs isolated from sediment in Calcite Springs in Yellowstone National Park. Thermolithobacter ferrireducens strain JW/KA-2(T) metabolism consists of the oxidation of hydrogen gas and reduction of ferric oxide to magnetite. Thermolithobacter carboxydivorans strain R1(T) is hydrogenic and oxidizes carbon monoxide.

Thermosinus is a Gram-negative bacteria genus from the family of Acidaminococcaceae. Up to now there is only one species of this genus known.

Tsukamurella soli is a Gram-positive and rod-shaped bacterium from the genus of Tsukamurella which has been isolated from forest soil from the Hallasan mountain on the Jeju island in Korea.

Tsukamurella spumae is a bacterium from the genus of Tsukamurella which has been isolated from foam from an activated sludge plant in England.

Tsukamurella sunchonensis is a bacterium from the genus of Tsukamurella which has been isolated from activated sludge in Suncheon in Korea.

In electrochemistry, CO stripping is a special process of voltammetry where a monolayer of carbon monoxide already adsorbed on the surface of an electrocatalyst is electrochemically oxidized and thus removed from the surface. A well-known process of this type is CO stripping on Pt/C electrocatalysts in which the electrooxidation peak occurs somewhere between 0.5 to 0.9 V depending on the characteristics and structural properties of the specimen.

Terrabacter carboxydivorans is a species of Gram-positive, nonmotile, non-endosporeforming bacteria. Cells are rod-shaped. It was initially isolated from roadside soil near Yonsei University, Seoul, South Korea during a survey for bacteria with the ability to digest carbon monoxide. The species was first described in 2011, and its name is derived from Latin carboxydum (air) and vorans.