The Royal Chapel of the Chogyals is the main centre for prayers with an assembly hall in the centre and large depository of Buddhist scriptures and literature and contains altars which are orated with Buddha, Bodhisattvas and Tantric deities. Tsukhalang Palace which served as a location for coronation, marriages and victory ceremonies among the Sikkimese royalty. [1]

The palace celebrates Pang Lhabsol, held in mid September in honor of Mount Khangchendzonga, and Kagyad is celebrated in early December. [1]

Leh is the joint capital and largest city of the region administered by India as a union territory of Ladakh. Leh, located in the Leh district, was also the historical capital of the Kingdom of Ladakh, the seat of which was in the Leh Palace, the former residence of the royal family of Ladakh, built in the same style and about the same time as the Potala Palace in Tibet. Leh is at an altitude of 3,524 m (11,562 ft), and is connected via National Highway 1 to Srinagar in the southwest and to Manali in the south via the Leh-Manali Highway.

The Jokhang, also known as the Qoikang Monastery, Jokang, Jokhang Temple, Jokhang Monastery and Zuglagkang, is a Buddhist temple in Barkhor Square in Lhasa, the capital city of Tibet Autonomous Region of China. Tibetans, in general, consider this temple as the most sacred and important temple in Tibet. The temple is currently maintained by the Gelug school, but they accept worshipers from all sects of Buddhism. The temple's architectural style is a mixture of Indian vihara design, Tibetan and Nepalese design.

Mindrolling Monastery, is one of the "Six Mother Monasteries" of the Nyingma school in Tibet. It was founded by Rigzin Terdak Lingpa in 1676. Tendrak Lingpa's lineage is known as the Nyo lineage. The name in Tibetan means "Place of Perfect Emancipation". It is located in Zhanang County, Shannan Prefecture, Tibet Autonomous Region, China, known as U-Tsang. Mindrolling Monastery is approximately 43 kilometers east of the Lhasa airport, on the south side of the Tsangpo river.

The Palcho Monastery or Pelkor Chode Monastery or Shekar Gyantse is the main monastery in the Nyangchu river valley in Gyantse, Gyantse County, Shigatse Prefecture, Tibet Autonomous Region. The monastery precinct is a complex of structures which, apart from the Tsuklakhang Monastery, also includes its Kumbum, believed to be the largest such structure in Tibet, that is most notable for its 108 chapels in its several floors and the old Dzong or fort.

Shalu Monastery is small monastery 22 kilometres (14 mi) south of Shigatse in Tibet. Founded in 1040 by Chetsun Sherab Jungnay, for centuries it was renowned as a centre of scholarly learning and psychic training and its mural paintings were considered to be the most ancient and beautiful in Tibet. Shalu was the first of the major monasteries to be built by noble families of the Tsangpa during Tibet's great revival of Buddhism, and was an important center of the Sakya tradition. 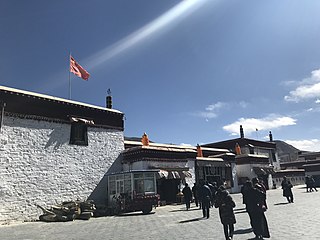 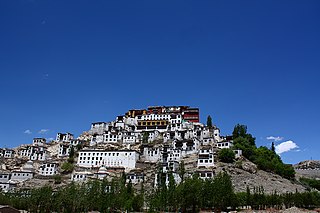 Thikse Gompa or Thikse Monastery is a gompa affiliated with the Gelug sect of Tibetan Buddhism. It is located on top of a hill in Thiksey approximately 19 kilometres (12 mi) east of Leh in Ladakh, India. It is noted for its resemblance to the Potala Palace in Lhasa, Tibet, and is the largest gompa in central Ladakh, notably containing a separate set of buildings for female renunciates that has been the source of significant recent building and reorganisation.

Tabo Monastery is located in the Tabo village of Spiti Valley, Himachal Pradesh, northern India. It was founded in 996 CE in the Tibetan year of the Fire Ape by the Tibetan Buddhist lotsawa (translator) Rinchen Zangpo, on behalf of the king of western Himalayan Kingdom of Guge, Yeshe-Ö. Tabo is noted for being the oldest continuously operating Buddhist enclave in both India and the Himalayas. A large number of frescoes displayed on its walls depict tales from the Buddhist pantheon. There are many priceless collections of thankas, manuscripts, well-preserved statues, frescos and extensive murals which cover almost every wall. The monastery is in need of refurbishing as the wooden structures are aging and the thanka scroll paintings are fading. After the earthquake of 1975, the monastery was rebuilt, and in 1983 a new Du-kang or Assembly Hall was constructed. It is here that the 14th Dalai Lama held the Kalachakra ceremonies in 1983 and 1996. The monastery is protected by the Archaeological Survey of India (ASI) as a national historic treasure of India.

Chemrey Monastery or Chemrey Gompa is a 1664 Buddhist monastery, approximately 40 kilometres (25 mi) east of Leh, Ladakh, northern India. It belongs to the Drugpa monastic order. It was founded in 1664 by the Lama Tagsang Raschen and dedicated to King Sengge Namgyal.

Matho Monastery, or Matho Gonpa or Mangtro Monastery or Mangtro Gonpa, from the Tibetan "mang" that means "many" and "tro" that means "happiness", is a Tibetan Buddhist monastery located 26 kilometres southeast of Leh in Ladakh, northern India, on the banks of the Indus River. The village of Matho is located at the mouth of a deep gorge running out of the Zanskar Range and across the Indus. It is directly opposite Thikse Monastery.

Keutsang Hermitage is a historical hermitage, belonging to the Sera Monastery, about 8 kilometres (26,000 ft) northwest of Lhasa in Tibet Autonomous Region. The hermitage was in a precariously perched cave once inhabited by the great Tibetan guru Tsongkhapa. However, the original cave collapsed in a landslide. What is present now was rebuilt, adjoining the ruined Keutsang West Hermitage, at a safer location. As it exists now, Keutsang is to the east of Sera on a hillside above Lhasa’s principal cemetery. Rakhadrak Hermitage is above and close to this hermitage. 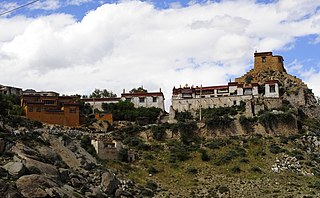 Purbuchok Hermitage is a hermitage situated in the northeastern corner of the Lhasa Valley in the northern suburb of Dodé in the Tibet Autonomous Region of the People's Republic of China. Destroyed by the Chinese in 1959, it was mostly restored in 1984. Affiliated to the Sera Monastery, it is the last hermitage to be visited on the “Sixth-Month Fourth-Day” pilgrimage circuit. The hills surrounding the monastery have been given name tags of the three protectors of the divine paradise namely the Avalokiteśvara, Manjusri and Vajrapani. It is also identified with the six-syllables divine mantra (sngags)- OM Mani Padme Hum.

Sera Utsé Hermitage, Sera Utse, Sera Ütse, Sera Tse or Drubkjang Tse is a historical hermitage belonging to Sera Monastery. It is located on the mountain directly behind Sera Monastery itself, which is about 5 kilometres (3.1 mi) north of the Jokhang in Lhasa, Tibet Autonomous Region of the People's Republic of China. It is older than Sera Monastery.

Negodong Nunnery is a historical hermitage, belonging to Sera Monastery. It is located in the northeastern Lhasa suburb known as Dodé Valley, northeast of Sera, Tibet. Buddhist scholar of the Sera Jé College’s Gomdé Regional House, Nam mkha’ rgyal mtshan. It was initially founded as a monastery with seventeen monks but later allotted for exclusive use as nunnery to provide personal security to the nuns who were then residing in a remote nunnery at Gnas nang, away from the present location at Gnas sgo gdong. 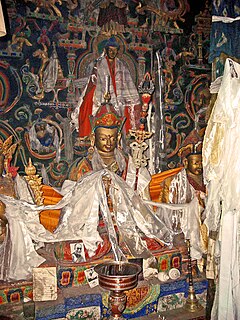 The Bodongpa or Bodong tradition, is one of the smaller traditions of Tibetan Buddhism falling outside the classification of the four main schools.