Last updated November 21, 2020
For other ships with the same name, see USS Niagara.

The sixth USS Niagara (SP-136), later PY-9, was a United States Navy patrol vessel in commission from 1918 to 1931 and which served during World War I.

Niagara was a steam yacht built in 1898 by Harlan and Hollingsworth, Wilmington, Delaware. The U.S. Navy purchased her on 10 August 1917 from Howard Gould of New York, New York, and converted her into an armed patrol yacht. She was commissioned in the Tebo's Yacht Basin, Brooklyn, New York, on 16 April 1918, Commander E. B. Larimer in command. [2]

Niagara departed New York on 21 May 1918 as escort for a merchant convoy bound for Bermuda and the Azores. She arrived at Ponta Delgada, Azores, on 12 August 1918 and departed on 22 August 1918 to join the American Patrol Detachment at Grassy Bay, Bermuda. On 5 September 1918 she stood out of Grassy Bay to rescue and tow in the merchant sloop Gauntlet, which was adrift after her sails had been carried away in a storm. [2]

Niagara entered the New York Navy Yard on 13 May 1919 for repairs before training out of New London, Connecticut, and New York. She departed New York on 25 September 1919 for Key West, Florida, then cruised off the coast of Mexico and between ports in Texas, Louisiana, and Florida. Other missions took her off Honduras, Guatemala, and Cuba. [2]

Reclassified PY-9 on 17 July 1920, she continued patrols in the Caribbean Sea as a unit of the special service squadron until decommissioning at Philadelphia, Pennsylvania, on 21 April 1922. [2]

Niagara recommissioned on 24 June 1924, Commander Paul P. Blackburn in command. She sailed on 3 November 1924 to survey in the Caribbean under the direction of the Navy Hydrographic Office. She operated most of the next eight years charting the Gulf of Venezuela and the coast of Central America. [2]

Her last survey cruise ended when she returned to Philadelphia on 17 October 1930. Niagara decommissioned on 3 March 1931 and her name was struck from the Navy List on 10 December 1931. She was sold for scrapping on 13 September 1933 to the Northern Metal Company of Philadelphia. [2]

In 1899, when the Niagara was owned by Howard Gould, photographs of the ship were included a book entitled Niagara; The Old And The New by Frank L. Blanchard. [4] Originally, Niagara had a Welte Style 6 Concert Orchestrion which went through two decks (as pictured below - only the lower portion of the instrument is visible in the second row center photograph); Gould replaced this in 1912 with a Welte Philharmonic Organ. [5]

USS Stevens (DD–86) was a Wickes-class destroyer in the United States Navy during World War I. She was the first ship named for Thomas Holdup Stevens. 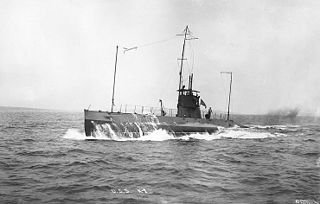 USS K-1 (SS-32) was the lead ship of her class of submarine of the United States Navy. Originally named Haddock until renamed while under construction, she participated in World War I as a patrol sub off the coast of the Azores in southwest Europe.

USS Wilkes (DD-67) was a Sampson-class destroyer in the United States Navy during World War I. She was the second Navy ship named for Commodore Charles Wilkes (1798–1877). She served with the United States Coast Guard as (CG-25).

USS Mayflower (PY-1) was the second ship in the United States Navy to have that name. Mayflower was a luxurious steam yacht built in 1896, by J. and G. Thompson, Clydebank, Scotland for millionaire Ogden Goelet, who died on board Mayflower, in August 1897. Her sister ship, said to be almost identical and built at the same time and in the same yard for brother, Robert Goelet, later became USS Nahma.

USS Cymophane (PYc-26) was a Cymophane-class patrol yacht acquired by the United States Navy early during World War II. She was used for patrol, escort, anti-submarine, and rescue operations along coastal waters.

USS Alacrity (SP-206) was a steel cruising yacht that served in the US Navy as a section patrol craft. It was built by Pusey & Jones at Wilmington, Delaware for W. A. Bradford in 1910 then sold to John H. Blodgett of Boston.

The auxiliary patrol vessel USS Yacona (SP-617) was built in 1898 in Scotland as a civilian steam yacht of the same name. Later, she was renamed Amélia as a survey yacht of the King of Portugal, before reverting to Yacona in 1901. She was acquired by the U.S. Navy in September 1917 and served until 1919 as a patrol vessel in the western Atlantic. In 1921 she was transferred to the Philippines as the governmental yacht Apo, serving until 1932.

The third USS Ontario (AT–13), a single screw seagoing tug, was laid down by the New York Shipbuilding Company, Camden, New Jersey on 23 November 1911, launched on 11 April 1912, and commissioned at Philadelphia Navy Yard on 4 September 1912, Chief Boatswain S. M. McCarthy in command.

USS Rambler (SP-211) was a steam yacht acquired by the United States Navy during World War I for patrol duty.

USS Sultana (SP-134) was a yacht acquired under a free lease by the U.S. Navy during World War I. She was outfitted as a patrol craft and was assigned to escort duty in the North Atlantic Ocean. She served honorably—rescuing survivors adrift in the water and protecting cargo ships from submarine attack—and was returned to her owner at the close of the war.

USS Corona (SP-813) was a yacht acquired by the U.S. Navy during World War I. She was outfitted as a patrol craft, and assigned to the North Atlantic Ocean, based out of Brest, France, to protect shipping from the German submarines and Q-ships. Post-war she was decommissioned, returned to her original condition, and disposed of by public auction.

USS Galatea (SP-714/YP-714) was a yacht acquired by the U.S. Navy during World War I. She was outfitted as an armed patrol craft and served in the North Atlantic Ocean. At war's end she was used as a receiving ship in Portsmouth, New Hampshire, for submariners before being sold in 1921.

USS Utowana (SP-951) – also known as USS Victorine (SP-951) -- was a fishing trawler acquired by the U.S. Navy during World War I. The Navy had planned to use her as a minesweeper based out of Kittery, Maine; however, Utowana spent most of her service time operating as an armed patrol craft, responsible for escorting Allied ships across the dangerous North Atlantic Ocean. She served through the war and the armistice before returning to the United States for decommissioning.

The seventh USS Niagara (CMc-2/PG-52/AGP-1) was an auxiliary ship of the United States Navy during World War II. 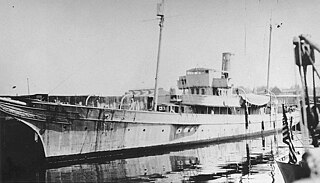 USS Tourmaline (PY-20) was a converted yacht that patrolled with the United States Navy in World War II.