When the writing project was developed the parameters for this series were designed to cover only commissioned US Navy ships with assigned names. If the ship was not assigned a name it was not included in the histories written for the series. [1] In addition to the ship entries, DANFS and the online links have been expanded to include appendices on small craft, histories of Confederate Navy ships, and various essays related to naval ships.

Foreword and introduction passages for many editions were written by big names from naval command history from Arleigh Albert Burke [2] to Elmo Russell Zumwalt, Jr. [3] and others.

DANFS was published in print by the Naval Historical Center (NHC) as bound hardcover volumes, ordered by ship name, from Volume I (A–B) in 1959 to Volume VIII (W–Z) in 1981. Several volumes subsequently went out of print. In 1991 a revised Volume I Part A, covering only ship names beginning with A, was released. Work continues on revisions of the remaining volumes.

Volunteers at the Hazegray website undertook to transcribe the DANFS and make it available on the World Wide Web. The project goal is a direct transcription of the DANFS, with changes limited to correcting typographical errors and editorial notes for incorrect facts in the original. In 2008 the NHC was re-designated as the Naval History and Heritage Command (NHHC). It has developed an online version of DANFS (see External links section below) through a combination of optical character recognition (OCR) and hand transcription. The NHHC is slowly updating its online DANFS to correct errors and take into account the gap in time between the print publication and the present date. NHHC prioritizes updates as follows: ships currently commissioned, ships commissioned after the original volume publication, ships decommissioned after original volume publication, and finally updates to older ships. [11] The NHHC has begun a related project to place Ship History and Command Operations Reports online at their DANFS site.

As the DANFS is a work of the U.S. government, its content is in the public domain, and the text is often quoted verbatim in other works. Many websites organized by former and active crew members of U.S. Navy vessels include a copy of their ships' DANFS entries.

The Dictionary limits itself largely to basic descriptions and brief operational notes, and includes almost no analysis or historical context. 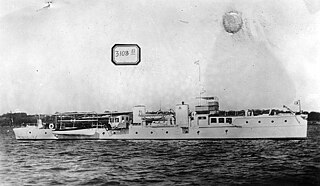 USS Impetuous (PYc-46) was a private yacht purchased by the Navy in August 1940 that served as a patrol boat of the United States Navy in Central America. The yacht was built as Paragon, the first of at least two Davol yachts to bear the name, in 1915 for Charles J. Davol of Providence, Rhode Island. In 1916 Davol sold the yacht to John Fred Betz, 3d of Philadelphia who renamed the yacht Sybilla III which served as the Section Patrol yacht USS Sybilla III (SP-104) from May 1917 to December 1918. Sybilla III remained in Betz's ownership until sale in 1935 to R. Livingston Sullivan of Philadelphia who renamed the yacht Arlis. On 12 August 1940 the Navy purchased the yacht placing it in commission as USS PC-454 on 16 October. The vessel was given the name Impetuous and reclassified PYc-46 on 15 July 1943. The yacht was decommissioned at Philadelphia 31 August 1944 and transferred to the War Shipping Administration for sale.

USS Nicholson was an O'Brien-class destroyer built for the United States Navy before the American entry into World War I. The ship was the second U.S. Navy vessel named in honor of five members of the Nicholson family who rendered distinguished service in the American Revolutionary War, the War of 1812, and the American Civil War: brothers James, Samuel, and John Nicholson; William Nicholson, son of John; and James W. Nicholson, grandson of Samuel.

The National Commission on Law Observance and Enforcement was a committee established by the U.S. President, Herbert Hoover, on May 20, 1929. Former attorney general George W. Wickersham (1858–1936) chaired the 11-member group, which was charged with surveying the U.S. criminal justice system under Prohibition and making recommendations for public policy.

Operation Golden Dragon was a combined United States-South Korea military naval training exercise in February 1973. The operation was held outside of Yang Po Ri island, South Korea. The exercise was designed to train the South Korea's naval troops and prepare South Korea for any attack from North Korea or Japan.

The White and Middleton Gas Engine Company was a manufacturer of internal combustion engines in the late 19th and early 20th centuries headquartered in Baltimore, Maryland, in the United States.

SS Edward Luckenbach was the first of five new cargo ships to be built for the Luckenbach Steamship Company by Fore River Shipbuilding Corporation. The ship was launched in September 1916, delivered in November and briefly operated as such before being requisitioned for World War I service. The ship was one of the cargo vessels in the first large convoy transporting U.S. Army forces to France. After that convoy the ship served as a U.S. Army Chartered Transport (USACT) until converted by the Army to a troop ship and turned over to the Navy a few months before the war's end. The Navy commissioned the ship as USS Edward Luckenbach assigning the miscellaneous identification number ID-1662 in August 1918. The transport made one wartime voyage with continued voyages returning the Army to the U.S. until August 1919.

The tirante is a silvery, elongated cutlass fish found in waters off Cuba.

The United States Army Ambulance Service (USAAS) was a unit of the United States Army during World War I. It was established by General Order No. 75 of the War Department in May 1917. It primarily provided medical services to the French, British and Italian Armies during the first World War. In the second World War, the unit aided the British and the Italians. It incorporated the volunteer sections of the American Field Service, which had been formed before the American entry into World War I.

The wooden-hulled screw steam yacht Red Cross was completed in 1892 at East Providence, RI, and by 1907 had been renamed Admiral. At that time, the yacht was owned by the banker, George Rumsey Sheldon. She was next owned by Irving T. Bush (1869–1948), the founder and creator of the famed Bush Terminal in South Brooklyn, NY, before being acquired by the president of the Submarine Signal Co., of New London, Gordon Dexter (1864–1937) about 1914.

American official war artists have been part of the American military since 1917. Artists are unlike the objective camera lens which records only a single instant and no more. The war artist captures instantaneous action and conflates earlier moments of the same scene within one compelling image.

"We're not here to do poster art or recruiting posters... What we are sent to do is to go to the experience, see what is really there and document it—as artists." 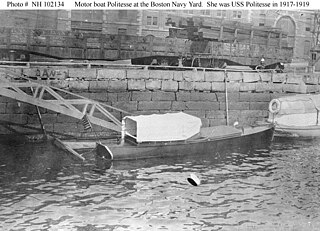 The City of Seattle was a side-wheel driven steam-powered ferry built in 1888. This vessel was the first ferry to operate on Puget Sound. City of Seattle was also used in the San Francisco Bay area starting in 1913. The ferry was known as YFB54 when owned by the U.S. navy in World War II, and as Magdalena during naval service and for a time following the war. The upper works of the ferry have been mounted on a barge hull, and are now in use as a houseboat in Sausalito, California.

USS Reefer, was a pilot schooner purchased by the United States Navy at New York City on May 25, 1846 from shipbuilders Brown & Bell for service as a dispatch boat in Commodore David Conner's Home Squadron during the Mexican–American War.

Rose Mooney was an itinerant Irish harpist during the 18th century, a time when the itinerant tradition was dying out. 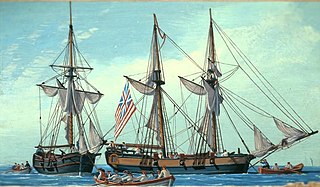 The first USS Mosquito was believed to have been purchased at Philadelphia late in 1775 for the new Continental Navy. She patrolled the Delaware River until destroyed during the British conquest of Philadelphia led by the Howe brothers and completed by them in October 1777. The Dictionary of American Naval Fighting Ships (DANFS) has identified this ship as a sloop, yet records from the period which are believed to refer to the ship have consistently identified her as being a schooner. These records also provide a bit more detail of her fate, indicating she was burned after capture in July 1777 during Royal Navy operations along the Delaware River.

Harry Asher Badt was an American naval officer who served in both World War I and World War II.