The following ships are converted aircraft carriers that were numbered along with the Iwo Jima-class, though they are not a part of that class. These ships are older aircraft carrier types that did not or could not be upgraded to support increasingly larger and heavier aircraft

The United States Navy built nearly 1,200 tank landing ships, classified as "Landing Ship, Tank" or "LST", from the World War II-era up through the early 1970s. [2] 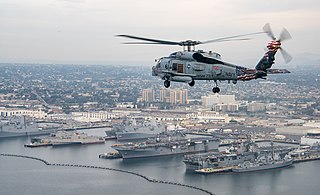 Naval Base San Diego, also known as 32nd Street Naval Station, is the second largest surface ship base of the United States Navy and is located in San Diego, California. Naval Base San Diego is the principal homeport of the Pacific Fleet, consisting of over 50 ships and over 150 tenant commands. The base is composed of 13 piers stretched over 1,600 acres (650 ha) of land and 326 acres (132 ha) of water. The total on base population is over 24,000 military personnel and over 10,000 civilians. 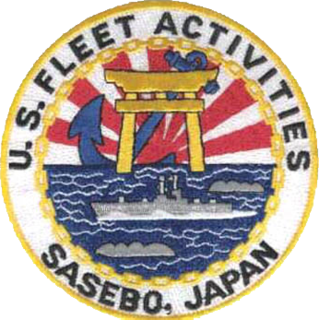 U.S. Fleet Activities Sasebo is a United States Navy base, in Sasebo, Japan, on the island of Kyūshū. It provides facilities for the logistic support of forward-deployed units and visiting operating forces of the United States Pacific Fleet and designated tenant activities.

Attack transport is a United States Navy ship classification for a variant of ocean-going troopship adapted to transporting invasion forces ashore. Unlike standard troopships – often drafted from the merchant fleet – that rely on either a quay or tenders, attack transports carry their own fleet of landing craft, such as the landing craft, vehicle, personnel (LCVP) or Higgins boat. 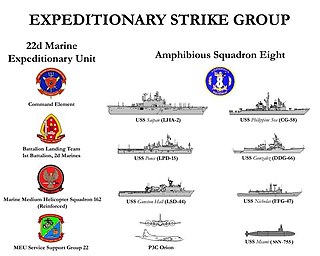 Expeditionary Strike Group SEVEN/Task Force 76 is a United States Navy task force. It is at one and the same time operationally a task force of the United States Seventh Fleet and administratively, the USN's only permanently forward-deployed expeditionary strike group. It is based at the White Beach Naval Facility at the end of the Katsuren Peninsula in Uruma City, Okinawa, Japan.