Last updated April 27, 2021
For other ships with the same name, see USS Monticello.

USS Monticello (LSD-35) was a Thomaston-class dock landing ship, the third ship of the United States Navy to be named for Monticello, Thomas Jefferson's home in Virginia.

After outfitting and trials off the East Coast, Monticello arrived at her home port, NS San Diego, on 27 May 1957 to join Amphibious Forces, Pacific Fleet, and immediately began shakedown training. She continued to operate off the Pacific coast, joining in major amphibious training operations which took her to Eniwetok in 1958 and Hawaii and Alaska in 1959, serving usually as primary control ship. Such operations, involving ships of all types along with underwater demolition teams and Marines, keep the fleet at top readiness for any challenge of diplomatic crisis or war itself.

On 14 November 1960, Monticello sailed for a seven-month deployment with the 7th Fleet in the western Pacific. She was combat-loaded with part of a Marine reinforced battalion landing team, and was alerted four times during the Laos crisis, steaming with Paul Revere (APA-248) and four escorting destroyers in the South China Sea and the Gulf of Siam. Returning to San Diego in July, Monticello joined in a joint Army-Navy-Air Force amphibious exercise at San Juan Island, Washington, in September, then returned to fleet training operations from her home port.

Monticello sailed on 18 February 1962 in JTF 8 for nuclear weapons tests at Christmas Island, first carrying cargo between Christmas Island and San Diego, and then acting as command ship during tests of antisubmarine weapons, as part of Operation Dominic. [1] In June, she sailed again to Christmas Island to aid in closing down the test operation, and continued to a second 7th Fleet tour of duty highlighted by a large amphibious exercise at Okinawa. She returned to San Diego and a program of training with Camp Pendleton marines, necessary overhaul, and refresher training early in December.

She again joined the 7th Fleet's Amphibious Ready Group from January to October 1964, taking part in SEATO as well as U.S. exercises.

After operating on the Atlantic coast through much of 1965, Monticello headed back to the western Pacific in August. Early in 1966, she steamed to South Vietnam for "Operation Double Eagle" the longest and largest amphibious operation of the Vietnam War up to that time. It enabled Allied forces to engage Viet Cong near Thac Tru and secure a beachhead in a key area. At the operation's conclusion, on 26 February, she headed for Subic Bay en route home via Hong Kong, Yokosuka, and Pearl Harbor.

After overhaul at San Pedro and training along the Pacific coast, Monticello got underway from San Diego on 13 January 1967, heading for the Far East. Much action awaited her in Vietnam. She served as primary command ship for Operation Beacon Hill I in Quảng Trị Province from 20 March to 2 April and Beacon Star there from 22 April to 12 May. She joined in Operation Bell in the latter half of May, in Operations Beacon Torch and Bear Chain in July, and in August participated in Operation Kangaroo Kick, an amphibious feint off Huế, and Operation Belt Drive, again at Quang Tri. Relieved at Da Nang in September. Monticello returned to San Diego on 13 October. After an overhaul that lasted until early 1968, Monticello conducted refresher training and local operations out of San Diego. In November of that year, she once again deployed to Vietnam where she remained into 1969.

Monticello was decommissioned on 1 October 1985 and transferred to the US Maritime Administration on 2 August 1991. Her name was struck from the Navy list on 24 February 1992 and she was sold on 29 September 1995 to Pegasus Inc for scrapping. She was repossessed by the Navy on 1 July 1997 after the failure of Pegasus to dismantle the ship and was re-transferred to the United States Maritime Administration and docked in the National Defense Reserve Fleet, Suisun Bay, Benicia, California. Ex-Monticello was environmentally cleaned to be used for target practice by Marad Contract #N00140-03C-A002 from 9 March through 27 April 2006 and then the vessel was returned to the Suisun Bay Reserve Fleet. [2] 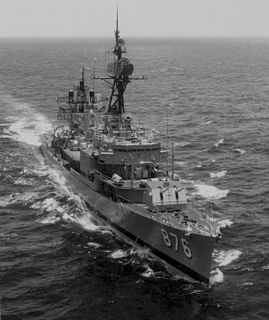 USS Rogers (DD-876) was a Gearing-class destroyer of the United States Navy. She was named for three brothers — Jack Ellis Rogers Jr., Charles Ethbert Rogers, and Edward Keith Rogers — killed in action aboard USS New Orleans during the Battle of Tassafaronga in the Solomon Islands on 30 November 1942. 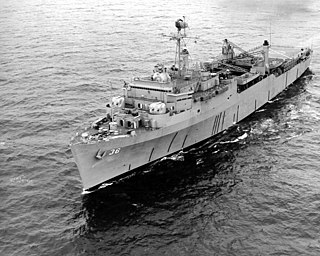 USS Tortuga (LSD-26) was a Casa Grande-class dock landing ship in the United States Navy. She was the first Navy ship to be named for the Dry Tortugas, a group of desert coral islets 60 miles west of Key West, Florida, which were discovered in 1513 by Spanish explorer Ponce de Leon. 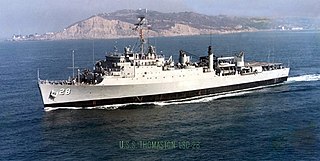 USS Thomaston (LSD-28) was the lead ship of her class of dock landing ship of the United States Navy. She was named for Thomaston, Maine, the home of General Henry Knox, the first Secretary of War to serve under the United States Constitution.

USS Alamo (LSD-33) was a Thomaston-class dock landing ship of the United States Navy. She was named for the Alamo, site of the 1836 Battle of the Alamo.

USS Reclaimer (ARS-42), was a Bolster-class rescue and salvage ship of the United States Navy. It was the only ship of the US Navy to be named Reclaimer.

USS Winston (AKA-94/LKA-94) was an Andromeda-class attack cargo ship named after counties in Alabama and Mississippi. She served as a commissioned ship for 19 years and 11 months.

USS Pickaway (APA/LPA-222) was a Haskell-class attack transport that saw service with the US Navy in World War II, the Korean War and the Vietnam War. She was of the VC2-S-AP5 Victory ship design type and named after Pickaway County, Ohio. 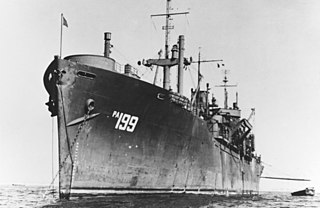 USS Magoffin (APA-199/LPA-199) was a Haskell-class attack transport acquired by the U.S. Navy during World War II for the task of transporting troops to and from combat areas. 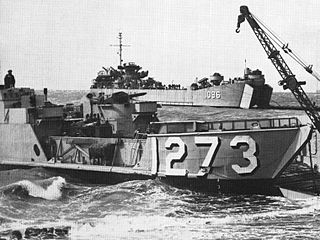 USS St. Clair County (LST-1096) was a LST-542-class tank landing ship built for the United States Navy in World War II. Like most of the ships of her class she was originally known only by her designation, USS LST-1096, and, like all remaining LSTs, was renamed on 1 July 1955. She was named for counties in Alabama, Illinois, Michigan, and Missouri. 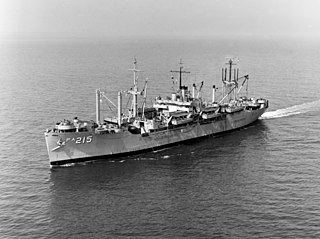 USS Navarro (APA/LPA-215) was a Haskell-class attack transport of the US Navy. She was of the VC2-S-AP5 Victory ship design type that saw service in World War II and the Vietnam War. Navarro was named after Navarro County, Texas.

USS Okanogan (APA/LPA-220) was a Haskell-class attack transport that saw service with the US Navy in World War II, the Korean War and the Vietnam War. She was of the VC2-S-AP5 Victory ship design type and named after Okanogan County, Washington.

USS Renville (APA-227) was a Haskell-class attack transport that saw service with the US Navy in World War II, the Korean War and the Vietnam War.

USS Colonial (LSD-18) was a Casa Grande-class dock landing ship of the United States Navy, named in honor of the Colonial National Historical Park, which comprises Jamestown, Williamsburg, and Yorktown in southeastern Virginia. 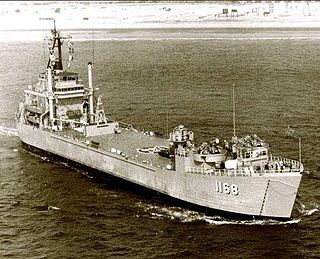 USS Wexford County (LST-1168), previously USS LST-1168, was a United States Navy landing ship tank (LST) in commission from 1953 to 1971, which saw service in the Atlantic, Caribbean, and Pacific and served in the Vietnam War.. 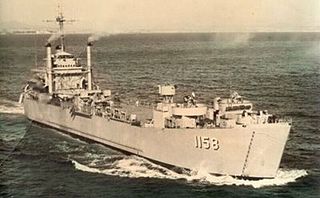