In early 1915, the British Admiralty selected the US Elco company for the production of 50 Motor Launches for anti-submarine work, British industry being at maximum capacity. This order was eventually increased by a further 530. The whole order was completed by November 1916, and the vessels entered Royal Navy service. The vessels were 80 feet (24 m) in length and capable of 20 knots (37 km/h). They were armed with a 3-pounder gun, towed paravanes to attack submarines and, later, depth charges. [3] Additional Motor Launches of the Fairmile A, B and other classes were built for World War II. [4]

The British sub chasers were operated around the coast in defence. However, they were uncomfortable, wet and not suited to British sea conditions.[ citation needed ] Although used during the First World War, they were sold when the war ended.

Eight British Fairmile B Motor Launches were transferred from Canada to the US in World War II, and included the SC-1466 class of sub-chasers. [7] [4]

The Imperial Japanese Navy had around 250 submarine chasers in World War II, principally about 200 of the No.1-class auxiliary submarine chasers. Some of these survived to serve in the Japan Maritime Self Defense Force (JMSDF) after the war. [8]

During Project Hula, the United States secretly transferred 32 U.S. Navy submarine chasers to the Soviet Union between 26 May and 2 September 1945, and some of these saw action in the Soviet Navy during Soviet military operations against the Japanese between 9 August and 2 September 1945. The transfer of 24 more was canceled when transfers halted on 5 September 1945, three days after the Japanese surrender. Between 1954 and 1960 all 32 transferred submarine chasers were scrapped by the Soviet Union or destroyed off its coast by mutual agreement between the two countries. [9]

In the decade immediately after World War II, the Soviet Union built 227 Kronshtadt-class submarine chasers, some of which remained in active service until the 1990s. Rapid developments in submarine technologies since World War II mean that submarine chasers are now obsolete, having been replaced by corvettes, frigates, and destroyers. 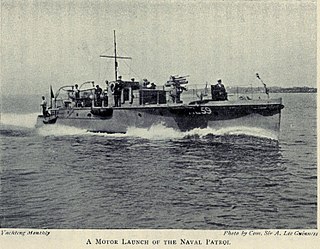 A Motor Launch (ML) is a small military vessel in Royal Navy service. It was designed for harbour defence and submarine chasing or for armed high-speed air-sea rescue. Some vessels for water police service are also known as motor launches. 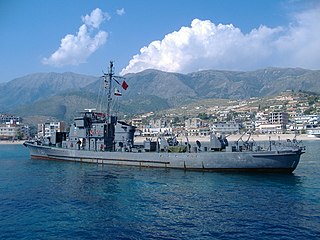 Project 122bis submarine chasers were a Soviet design which were exported throughout the communist bloc in the 1950s. The first ship, BO-270, was built at Zelenodolsk in 1945-1947 and a total of 227 were built for Soviet Navy (175) and border guard until 1955. As well as this, twenty Project 357 despatch vessels were built on the same hull, but were lightly armed.

The Fairmile Type-B motor launch was a type of motor launch built by British boatbuilder Fairmile Marine during the Second World War for the Royal Navy for coastal operations.

The Fairmile D motor torpedo boat was a type of British motor torpedo boat (MTB) and motor gunboat (MGB) designed by Bill Holt and conceived by Fairmile Marine for the Royal Navy. Nicknamed "Dog Boats", they were designed to combat the known advantages of the German E-boats over previous British coastal craft designs. They were bigger than earlier MTB or motor gunboat (MGB) designs but slower, at 30 knots compared to 40 knots.

The Black Sea Campaigns were the operations of the Axis and Soviet naval forces in the Black Sea and its coastal regions during World War II between 1941 and 1944, including in support of the land forces. 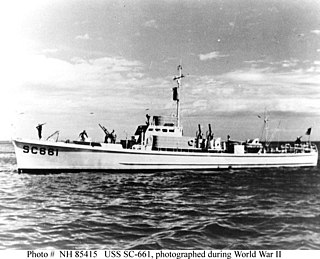 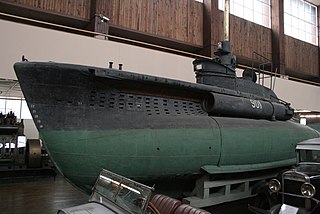 The CB class was a group of midget submarines built for the Italian Navy during World War II. However, they were also used by several other navies, seeing action in the Mediterranean and in the Black Sea.

The PC-461-class submarine chasers were a class of 343 submarine chasers constructed mainly for the US Navy and built from 1941 to 1944. The PC-461s were based primarily on two experimental submarine chasers, PC-451 and PC-452. While PC-461 began the series, the first of the class to enter service was PC-471. As part of the Lend-Lease program, 46 ships of this class were transferred to allies of the United States. Fifty-nine PC-461s were converted to other types of patrol vessels. Eight vessels of this class were lost, and one vessel was lost after conversion to a PGM-9-class motor gunboat. Only one of the class, USS PC-566 commanded by Lieutenant Commander Herbert G. Claudius, actually sank a submarine, U-166, during World War II; however, the website 'Patrol Craft Sailors Association' cites PC-461-class ships sinking or assisting sinking up to 6 German and Japanese subs. 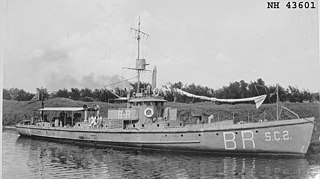 The SC-1 class was a large class of submarine chasers built during World War I for the United States Navy. They were ordered in very large numbers in order to combat attacks by German U-boats, with 442 boats built from 1917 to 1919.

The HNoMS Vigra was a Royal Norwegian Navy submarine chaser that saw action during World War II. She was named after the Norwegian island of Vigra.

The HNoMS Hessa was a Royal Norwegian Navy submarine chaser that saw action during World War II. She was named after the Norwegian island of Hessa. 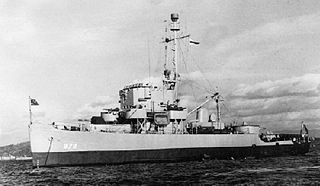 The PCE-842-class patrol craft were United States Navy patrol craft escorts designed during World War II that were intended for coastal and convoy escort. The design was derived from the 180-foot (55 m) Admirable-class minesweeper as a substitute for the 173-foot (53 m) PC-461-class submarine chasers that were used for anti-submarine warfare (ASW) in coastal areas. At 185 feet long and 640 tons, the PCE is more than twice the displacement of the PC. It has a crew complement of 99 officers and men. 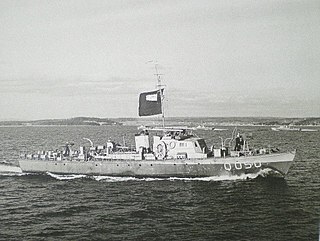 The Canadian Fairmile B was a motor launch built during the Second World War for the Royal Canadian Navy. They were adaptations of the British Fairmile B motor launch design incorporating slight modifications for Canadian climatic and operational conditions. Eighty-eight were built in Canada for service with the Coastal Forces of the Royal Canadian Navy in home waters, of which eight were supplied to the United States Navy.