A danlayer was a type of vessel assigned to minesweeping flotillas during and immediately after World War II. They were usually small trawlers, fitted for the purpose of laying dans. A dan is a marker buoy which consists of a long pole moored to the seabed and fitted to float vertically, usually with a coded flag at the top.

Dan laying was an important part of minesweeping, and boats were fitted specifically for this purpose. The task of a danlayer was to follow the minesweepers as they worked an area, and lay the dans which defined the area swept and made it obvious where the clear channels were. This would also help the minesweepers cover areas accurately without gaps and unnecessary overlaps. [1] A danlayer worked with a minesweeper flotilla when large areas of sea were to be clear-swept.

Since Germany had been an exponent of mine warfare since the 1920s, it was natural that the Kriegsmarine used a number of danlayers during World War II. Danlayers of the Kriegsmarine included the following vessels:

Danlayers employed by the Royal Navy during the extensive mine clearance operations following World War II included the following Isles-classtrawlers.

Two Round Table-classtrawlers, Sir Lanceleot (T228) and Sir Galahad (T226) were converted from minesweepers to danlayers prior to the Normandy landings.

In 1944, prior to the Allied invasion of Normandy, the Admiralty-type Motor Mine Sweepers Nos. 141, 142, 238, 239, 240, and 241 were converted to danlayers and redesignated as follows: HMS Burfin, HMS Cottel, HMS Fichot, HMS Jude, HMS Quirpon, HMS St. Barbe, respectively. All were twin-screw, wooden, 105-foot, coastal-minesweeping sloops that were financed by Steers Ltd. of St. John’s, Newfoundland, and built by Henry Stone in his shipyard at Monroe, Trinity Bay, Newfoundland, Canada between 1941 and 1943. 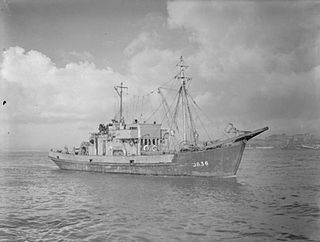 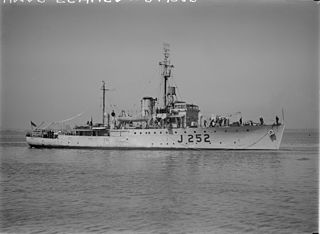 HMAS Echuca (J252/M252), named for the town of Echuca, Victoria, was one of 60 Bathurst-class corvettes constructed during World War II, and one of 36 initially manned and commissioned by the Royal Australian Navy (RAN). 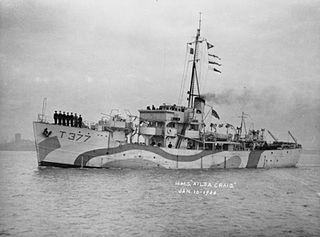 The Isles-class trawlers were a class of naval trawler used by the Royal Navy, Royal Canadian Navy and Royal New Zealand Navy during World War II.

HMS Rifleman was a turbine-powered Algerine-class minesweeper of the Royal Navy. She was launched in 1943 and saw active service during World War II, both in the European and Far East theatres. After the war she served in the Mediterranean and was used as an accommodation ship in Barrow before being sold for breaking in 1972.

HMS Bangor was a Bangor-class minesweeper of the Royal Navy that served during the Second World War. She was built at the Harland and Wolff shipyard in Govan, Scotland. Bangor was the lead vessel of her class and one of the diesel-engined versions. She was ordered on 12 July 1939, laid down on 19 September 1939, launched on 23 May 1940, and commissioned on 7 November 1940.

The Royal Naval Patrol Service (RNPS) was a branch of the Royal Navy active during both the First and Second World Wars. The RNPS operated many small auxiliary vessels such as naval trawlers for anti-submarine and minesweeping operations to protect coastal Britain and convoys.

The Castle-class minesweeper was a highly seaworthy naval trawler adapted for patrol, anti-submarine warfare and minesweeping duties and built to Admiralty specifications. Altogether 197 were built in the United Kingdom between 1916 and 1919, with others built in Canada, India and later New Zealand. Many saw service in the Second World War.

Commissioned minesweepers and danlayers of the Royal New Zealand Navy (RNZN) from its formation on 1 October 1941 to the present. The RNZN was created two years into World War II. For coherence this article covers the war years from the start, and thus includes also the New Zealand minesweepers operating from the beginning of the war.

HMNZS Matai (T01) was a Marine Department lighthouse tender which was requisitioned by the Royal New Zealand Navy (RNZN) and converted into a minesweeper.

The M class were the standard minesweeper of Nazi Germany's Kriegsmarine during World War II. The vessels were the primary force in Germany's harbor defense command and were organized administratively into minesweeper flotillas.

HMS Jason was a Halcyon-class minesweeper. She was named after the hero in Greek mythology and was the sixteenth Royal Navy ship to carry the name Jason. She was laid down on 12 December 1936, launched on 6 October 1937, and was completed on 9 June 1938. She survived the Second World War and was sold in 1946 to become a cargo ship. She was eventually broken up in 1950. Her pennant number was originally N99, but was changed to J99 in May 1940.

HMCS Canso was a Bangor-class minesweeper initially constructed for the Royal Navy during the Second World War. Transferred to the Royal Canadian Navy in 1942, the minesweeper saw service on both the West and East Coasts of Canada as a convoy escort and patrol vessel. The vessel participated in the invasion of Normandy and spent the final years of the war in European waters. Canso was returned to the Royal Navy following the war and was broken up for scrap in 1948.

HMCS Caraquet was a Bangor-class minesweeper initially constructed for the Royal Navy during the Second World War. Transferred to the Royal Canadian Navy in 1942, the vessel served on both coasts of Canada and took part in the Battle of the Atlantic as a convoy escort and the invasion of Normandy. Following the war, the minesweeper was returned to the United Kingdom who then sold the ship to the Portuguese Navy in 1946. Renamed Almirante Lacerda, the vessel was used as a survey ship until 1975 when it was discarded.

HMCS Blairmore was a Bangor-class minesweeper that served with the Royal Canadian Navy during the Second World War. Entering service in 1942, the ship took part in the Battle of the Atlantic and the invasion of Normandy. Following the war, the ship was laid up until 1958 when the Blairmore was transferred to the Turkish Navy. Renamed Beycoz, the vessel was discarded in 1971.

HMCS Mulgrave was a Bangor-class minesweeper that served with the Royal Canadian Navy during the Second World War. Entering service in 1942, the minesweeper took part in the Battle of the Atlantic and the invasion of Normandy. While sweeping for naval mines off France in 1944, the vessel hit one. The ship was towed back to port where Mulgrave was declared a constructive total loss. Laid up until the end of the war, the minesweeper was broken up in 1947.

RV Sir Lancelot (LT263) was a fisheries research vessel that was operated by the Directorate of Fisheries, now known as the Centre for Environment, Fisheries and Aquaculture Science (Cefas).

HMS Sharpshooter was a Halcyon-class minesweeper of the British Royal Navy. Built at Devonport Dockyard, Sharpshooter was completed in 1937. She served through the Second World War, acting both in her designed role as minesweeper and as a convoy escort, escorting several Arctic convoys. She took part in the evacuation from Dunkirk in 1940, and sank the German submarine U-655 in 1942.