Dispatch boats, which performed their dispatch-carrying duties only on a temporary basis, should not be confused with packet ships—sometimes called packet boats or paquetbots—which were cargo ships which also routinely carried the mail from port to port.

Use of term by the U.S. Navy

Dispatch boat was a term used by the United States Navy in its journal accounts to describe boats which carried messages, or mail—otherwise termed dispatches—between high-ranking military officials aboard other ships or to land-based destinations.

Dispatch boats during the American Revolution

In 1776 the Continental Navy ship Lynch was assigned dispatch boat duty and, after delivering her secret dispatches in France, set sail for the United States with French secret dispatches, only to be captured, but not before destroying the French dispatches. [1]

Dispatch boat race during the historic Battle of Trafalgar

Once the Battle of Trafalgar had been decided in favor of the British in October 1805, the honor of delivering the news of the victory as well as the loss of Admiral Lord Nelson belonged to the dispatch boat which first brought the news to the Admiralty in London.

A 1000-mile sea race from the location of the naval battle resulted between Lt. Lapenotiere in HMS Pickle and Captain Sykes in Nautilus with the Pickle reaching England first to deliver the dispatches to the Admiralty. For his outstanding effort in the race, Lt. Lapenotiere was awarded the then huge sum of 500 pound sterling cash prize and, in addition, was promoted to Commander. [2]

The American Civil War employed a large number of dispatch boats, such as Massasoit, Gladiolus and Geranium among numerous others. General Ulysses S. Grant depended on dispatch boats during his Virginia campaign to correspond with Union Navy ships on the James River.

Dispatch boats during the late 19th and early 20th centuries

The US Navy did not have enough dispatch boats available during the Spanish–American War of 1898, so private yachts and tugboats used by newspapers were frequently tasked by the Navy to carry messages. [3] USS Vega was a US dispatch boat during World War I.

Demise of the dispatch boat

Dispatch boats became largely unnecessary with the advent of underwater cable and shipboard radio technology in the early 20th century. However, there was a brief reprise during the Falklands War in 1982. CS Iris, a cable laying ship owned by British Telecom, was taken up from trade by the British Government. She ferried supplies and dispatches (including troop's mail from home) between elements of the fleet and between Ascension Island and the Falkland Islands – she also recovered urgent supplies that were air-dropped in the South Atlantic by Royal Air Force, C-130 Hercules aircraft. [4]

Eight ships of the Royal Navy have been named HMS Pickle:

The Battle of Coronel was a First World War Imperial German Naval victory over the Royal Navy on 1 November 1914, off the coast of central Chile near the city of Coronel. The East Asia Squadron of the Kaiserliche Marine led by Vice-Admiral Graf Maximilian von Spee met and overpowered a British squadron commanded by Rear-Admiral Sir Christopher Cradock. 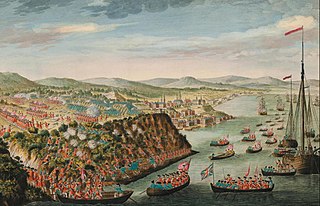 Amphibious warfare is a type of offensive military operation that today uses naval ships to project ground and air power onto a hostile or potentially hostile shore at a designated landing beach. Through history the operations were conducted using ship's boats as the primary method of delivering troops to shore. Since the Gallipoli Campaign, specialised watercraft were increasingly designed for landing troops, matériel and vehicles, including by landing craft and for insertion of commandos, by fast patrol boats, zodiacs and from mini-submersibles. 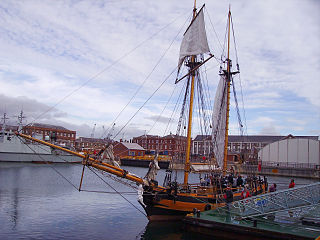 HMS Pickle was a topsail schooner of the Royal Navy. She was originally a civilian vessel named Sting, of six guns, that Lord Hugh Seymour purchased to use as a tender on the Jamaica station. Pickle was at the Battle of Trafalgar, and though she was too small to take part in the fighting, Pickle was the first ship to bring the news of Nelson's victory to Great Britain. She also participated in a notable single-ship action when she captured the French privateer Favorite in 1807. Pickle was wrecked in 1808, but without loss of life. 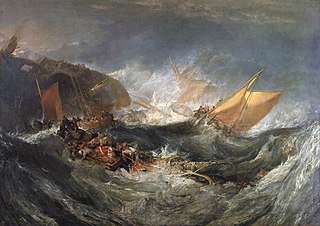 HMS Minotaur was a 74-gun third-rate ship of the line of the Royal Navy, launched on 6 November 1793 at Woolwich. She was named after the mythological bull-headed monster of Crete. She fought in three major battles – Nile, Trafalgar, and Copenhagen (1807) – before she was wrecked, with heavy loss of life, in December 1810.

The Trafalgar Way is the name given to the historic route used to carry dispatches with the news of the Battle of Trafalgar overland from Falmouth to the Admiralty in London. The first messenger in November 1805 was Lieutenant John Richards Lapenotière, of HMS Pickle, who reached Falmouth on 4 November after a hard voyage in bad weather. He then raced to London bearing the dispatches containing the momentous news of Lord Nelson's victory and death in the Battle of Trafalgar on 21 October 1805.

The New Trafalgar Dispatch was part of the bicentenary celebrations of Lord Nelson's famous and momentous victory at the Battle of Trafalgar, in 1805. The prolonged and multi-focal ceremony took place between July and September 2005.

HMS Laforey was the lead ship of her class of destroyer built for the Royal Navy. Launched a year before the First World War began, she was attached to the Dover Patrol. Laforey saw action in several engagements with German torpedo boats, including the Battle off Noordhinder Bank and the Action of 17 March 1917. Laforey was sunk in 1917 by a British mine after escorting several freighters to France. She was named for Francis Laforey, captain of HMS Spartiate at the Battle of Trafalgar in 1805.

Captain John Richards Lapenotière was a British Royal Navy officer who, as a lieutenant commanding the tiny topsail schooner HMS Pickle, observed the Battle of Trafalgar on 21 October 1805, participated in the rescue operations which followed it and then carried the dispatches of the victory and the death of Admiral Nelson to Britain.

Commander Robert Benjamin Young, RN was an officer in the Royal Navy. His service in small ships led to his presence observing the battle of Trafalgar in 1805 from the deck of the tiny 10-gun cutter HMS Entreprenante. Following this battle, Young performed well, acting as messenger and rescue boat during the storm, although the honour of carrying the dispatches back to England was given to John Richards Lapenotiere, commander of HMS Pickle; Young maintained that prior to the battle Admiral Nelson had promised this honour to him.

The Raid on Cuxhaven was a British ship-based air-raid on the Imperial German Navy at Cuxhaven mounted on Christmas Day, 1914.

The Gibraltar Chronicle is a national newspaper published in Gibraltar since 1801. It became a daily in 1821. It is Gibraltar's oldest established daily newspaper and the world's second oldest English language newspaper to have been in print continuously. Its editorial offices are at Watergate House, and the print works are in the New Harbours industrial estate.

USS Island Belle (1861) was a large tugboat acquired by the Union Navy during the American Civil War. Although carrying relatively heavy weaponry, she was used for unassuming tasks, such as carrying dispatches and providing surveillance. When she ran aground in unfriendly waters, she was scrapped to prevent her falling into the hands of the Confederate forces.

USS Harcourt (1864) was a small steamship acquired by the Union Navy during the American Civil War. She was placed into service as a tugboat and assigned to the blockade of ports of the Confederate States of America.

USS Sibyl (1863) was a wooden-hull steamer outfitted with heavy guns, purchased by the Union Navy during the American Civil War. 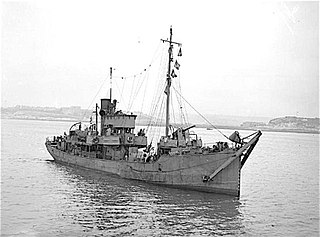 A naval trawler is a vessel built along the lines of a fishing trawler but fitted out for naval purposes. Naval trawlers were widely used during the First and Second World Wars. Fishing trawlers were particularly suited for many naval requirements because they were robust boats designed to work heavy trawls in all types of weather and had large clear working decks. One could create a mine sweeper simply by replacing the trawl with a mine sweep. Adding depth charge racks on the deck, ASDIC below, and a 3-inch (76 mm) or 4-inch (102 mm) gun in the bow equipped the trawler for anti-submarine duties. 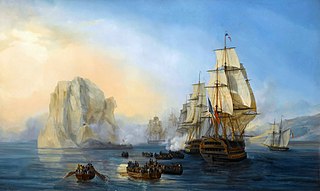 The Battle of Diamond Rock took place between 31 May and 2 June 1805 during the Napoleonic Wars. It was an attempt by Franco-Spanish force dispatched under Captain Julien Cosmao to retake Diamond Rock, at the entrance to the bay leading to Fort-de-France, from the British forces that had occupied it over a year before. 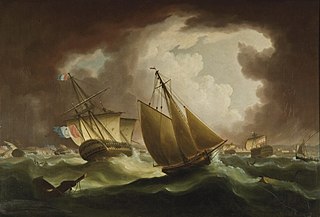 HMS Entreprenante, was a 10-gun cutter that the Royal Navy captured from the French in 1798. The British commissioned her in 1799 and she served during the French Revolutionary and Napoleonic Wars, participating in the Battle of Trafalgar. She has been the only ship of the Royal Navy to bear the name. She took part in several small engagements, capturing Spanish and French ships before she was sold in 1812 for breaking up. 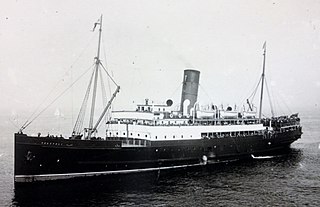 RMS Snaefell (III) – the third ship in the line's history to be so named – was a packet steamer operated by the Isle of Man Steam Packet Company from 1910 to 1914. She was then acquired by the Admiralty at the outbreak of the First World War, until she was torpedoed and sunk in the Mediterranean on 5 June 1918.

HMS Nautilus was launched at Milford in 1804 as the only member of her class of sloops. She had a minor career capturing a handful of merchantmen. She was wrecked on 5 January 1807 with great hardship for the survivors and loss of life.