Last updated October 24, 2021
For other ships with the same name, see USS Savannah.

After shakedown out of Guantanamo Bay, Savannah proceeded to her homeport at Norfolk, Virginia. Arriving on 12 May, she completed post-shakedown availability on 9 August, and prepared for deployment to the Mediterranean.

Savannah left Norfolk on 20 September. En route to Rota, Spain, she refueled ships taking part in a Caribbean exercise. After reporting to the 6th Fleet on 8 October, Savannah operated in Task Group 60.1. By the end of the year, she had replenished 178 ships.

Savannah continued to operate with the 6th Fleet in the Mediterranean until early March 1972. On 9 March, she headed west for Norfolk and arrived there eight days later. Her stay in the United States, however, was cut short by the exigencies of the Vietnam War. On 25 April, she left the Chesapeake Bay and, four days later, transited the Panama Canal. Savannah arrived in Subic Bay, Philippines, on 20 May and began a five-month tour replenishing the fleet along the coast of Vietnam. She made six line swings to the Gulf of Tonkin during this time. Each swing was punctuated by a 4–6-day load out period in Subic Bay.

Savannah departed Subic Bay on 5 November, bound for Norfolk. She transited the Panama Canal on 4 December and arrived at Norfolk on the 8th. Savannah operated out of Norfolk, along the Atlantic seaboard and in the Caribbean, for almost all of 1973. On 3 December 1973, she again headed eastward to join the 6th Fleet in the Mediterranean. From 12 December until late May 1974, she supported units of the 6th Fleet in the Mediterranean. On 3 June 1974, she returned to Norfolk.

From December 1976 to August 1977 the ship was laid up at the Brooklyn Navy Yard, for restructuring of her aft section. The 3" 50 calibre dual mounts were replaced by hangars for a pair of CH46D SeaKnight helicopters. The ship visited the Brooklyn Navy Yard again in 1980–1981, which saw the installation of a Sea Sparrow missile system and Phalanx CIWS.

From 11 August 1993 to 5 February 1994 the ship deployed to the Mediterranean Sea, including a trip with the USS America carrier group through the Suez Canal to the Indian Ocean on 1 November 1993 in support of U.N. efforts in Somalia. [2]

Savannah was decommissioned on 28 July 1995, at Norfolk, Virginia, moored at the former Naval Shipyard in Philadelphia for a few years and finally laid up in the National Defense Reserve Fleet, James River, Fort Eustis, Virginia. The ship was struck from the Naval Register on 29 October 1998, and transferred to the Maritime Administration for disposal. On 27 January 2009, the Department of Transportation signed a fee for service contract worth $515,726 with ESCO Marine of Brownsville, Texas, to scrap ex-Savannah.

The scrapping of the Savannah was featured on the television show Break It Down which aired on 8 July 2010 on the National Geographic Channel. Extensive footage of the ship was featured, chronicling the struggles with removing toxic items like asbestos before salvaging and cut up.

USS Shreveport (LPD-12) is an Austin-class American amphibious transport dock. It is the second ship of the United States Navy to be named for the city in Louisiana. Her keel was laid down on 27 December 1965 by the Lockheed Shipbuilding and Construction Company of Seattle, Washington. She was launched on 22 October 1966 sponsored by Mrs. Andrew McBurney Jackson, Jr., and commissioned on 12 December 1970 with Captain Pehr H. Pehrsson in command.

The fifth USS Independence (CV/CVA-62) was an aircraft carrier of the United States Navy. She was the fourth and final member of the Forrestal class of conventionally powered supercarriers. She entered service in 1959, with much of her early years spent in the Mediterranean Fleet.

USS Wrangell (AE-12) was laid down under a Maritime Commission contract as SS Midnight during February 1944 at Wilmington, North Carolina, by the North Carolina Shipbuilding Company; launched on 14 April 1944; sponsored by Mrs. G. T. Cambell; delivered to the Navy, incomplete, on 28 May 1944; moved to Hampton Roads; converted to an ammunition ship by the Norfolk Shipbuilding and Drydock Co.; and commissioned on 10 October 1944 at the Norfolk Navy Yard, Comdr. Haskell C. Todd in command.

USS Suribachi (AE-21) was a Suribachi-class ammunition ship of the United States Navy. The ship was laid down on 31 January 1955 at Sparrows Point, Maryland, by Bethlehem Sparrows Point Shipyard, Inc.; launched on 2 November 1955; sponsored by Mrs. Lemuel C. Shepherd; and commissioned on 17 November 1956, Captain Brooks J. Harral in command. She was named for the volcano of Iwo Jima, Mount Suribachi, the hill where the photograph Raising the Flag on Iwo Jima was taken.

USS Santa Barbara (AE-28) was an Kilauea-class ammunition ship in the United States Navy. Santa Barbara is both the name of Santa Barbara, California and a historically active volcano on Terceira Island in the Azores. In addition, Saint Barbara is the patron saint of those who work with cannons and explosives.

The second USS Seattle (AOE-3), a Sacramento-class fast combat support ship, was laid down on 1 October 1965, at the Puget Sound Naval Shipyard, Bremerton, Washington; launched on 2 March 1968; sponsored by Mrs. William M. Allen, chairman of the board of the Children's Orthopedic Hospital Association, Seattle; and commissioned on 5 April 1969, Capt. Bruce Keener III in command.

USS Detroit (AOE-4) was the fourth and last Sacramento-class fast combat support ship built for the United States Navy. She was laid down on 29 November 1966 by Puget Sound Naval Shipyard, Bremerton, Washington; launched 21 June 1969; and commissioned on 28 March 1970. She is the fifth United States Navy ship named after Detroit, Michigan, the largest city in the state of Michigan, and the river of the same name. 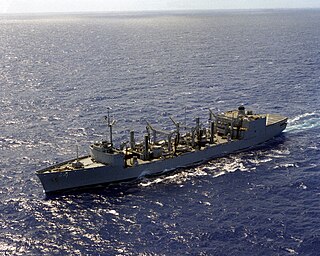 USS Wichita (AOR-1) was the lead ship of the Wichita-class replenishment oilers. She was the second ship to be named for the city of Wichita, Kansas. 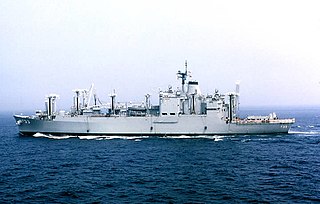 USS Shasta (AE-33) was a Kilauea-class replenishment ammunition ship of the United States Navy. She was named after Mount Shasta, a volcano in the Cascade Range in northern California. Shasta's mission was to support forward deployed aircraft carrier battle groups, which she accomplished through underway replenishment and vertical replenishment. Over three decades, Shasta and her crew took part in the Vietnam War, the Cold War, the Iran–Iraq War, Desert Shield/Operation Desert Storm, and numerous other actions. 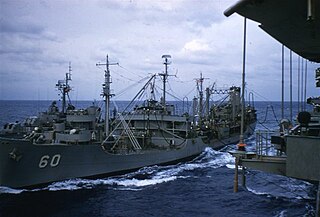 USS Noxubee (AOG-56) was a Patapsco-class gasoline tanker acquired by the U.S. Navy for the task of transporting gasoline to warships in the fleet, and to remote Navy stations. She served in a commissioned status from 1945 to 1959, and 1965–1975. She was named for a river in Mississippi.

USS Putnam (DD-757), an Allen M. Sumner-class destroyer, was the second ship of the United States Navy to be named for Charles Putnam. She was built and saw action in the Pacific during World War II. She was laid down on 11 July 1943 by Bethlehem Steel Co., Shipbuilding Division, San Francisco, California and launched on 26 March 1944; sponsored by Mrs. Doana Putnam Wheeler. The ship was commissioned on 12 October 1944. Cdr. Frederick V. H. Hilles was in command.

USS Sylvania (AFS-2), a Mars-class combat stores ship, was the second ship of the United States Navy to be named Sylvania.

USS Truett (FF-1095) was a Knox-class frigate named after Quincy Hightower Truett, who received the Navy Cross posthumously. The ship is now serving in the Royal Thai Navy as the HTMS Phutthayotfa Chulalok.

USS Pochard (AM-375) was an Auk-class minesweeper acquired by the United States Navy for the dangerous task of removing mines from minefields laid in the water to prevent ships from passing.

USS Wabash (AOR-5) was a Wichita-class replenishment oiler in the United States Navy from 1970 to 1994.

USS San Diego (AFS-6) was a Mars-class combat stores ship acquired by the U.S. Navy in 1968. She served the U.S. Atlantic Fleet until decommissioned in 1993. She then was redesignated as a United States Naval Ship, assigned to the Military Sealift Command, and served in a non-commissioned status with a mostly civilian crew as USNS San Diego (T-AFS-6) until 1997.

The second USS Altair (AK-257) was a United States Navy Greenville Victory-class cargo ship in commission from 1952 to 1953. She was converted into a Antares-class general stores issue ship (AKS-32) in 1953 and was in commission as such from 1953 to 1969, seeing extensive service during the Cold War. Prior to her U.S. Navy career, she had operated as the merchant ship SS Aberdeen Victory during the latter stages of World War II.