The Uinta County Courthouse in Evanston, Wyoming is the oldest courthouse building in Wyoming, and one of the oldest permanent structures in Wyoming. Built in three stages, the first phase was a two-story jail, built in 1873. It was expanded with court facilities the following year, and in 1910 the main portion of the Georgian Revival structure was built with the present façade. Each phase showed an increasing attention to detail and ornament. [2]

The original 1873 jail and 1874 courthouse were built by Evanston contractors Harvey Booth and William McDonald, assisted by mason William Durnford. McDonald was also the chairman of the Uinta County Commission; his contract stipulated that the work cost no more than $25,000. The 1910 addition was carried out by Evanston contractor W.H. Armstrong for $24,000. [3]

The present front section of the courthouse is a brick structure, two stories high, with quoined corners and a central portico. The portico is supported by two unfluted Ionic stone columns, backed by two engaged Ionic pilasters of the same material on the building itself. The courthouse has a tiled roof with a dentiled cornice. The masonry walls of the 1873-1874 portion of the complex have been stained red by a mixture reportedly containing slaughterhouse blood and stale beer. [3]

In 1887 a new jail was built nearby by the Pauly Jail Building and Manufacturing Company of St. Louis. This building was demolished in 1976 to make way for a new public safety facility. The new jail allowed the courthouse to expand its office and storage space. [3]

The Uinta County Courthouse was listed on the National Register of Historic Places in 1977. [1] 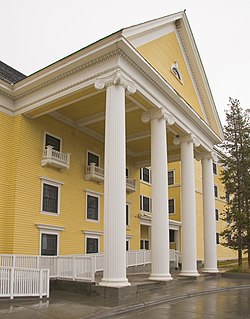 The Lake Hotel is one of a series of hotels built to accommodate visitors to Yellowstone National Park in the late 19th and early 20th century. Built in 1891, it is the oldest operating hotel in the park. It was re-designed and substantially expanded by Robert Reamer, architect of the Old Faithful Inn in 1903. In contrast to the Old Faithful Inn and many other western park facilities, the Lake Hotel is a relatively plain clapboarded Colonial Revival structure with three large Ionic porticoes facing Yellowstone Lake. It was designated a National Historic Landmark in 2015. 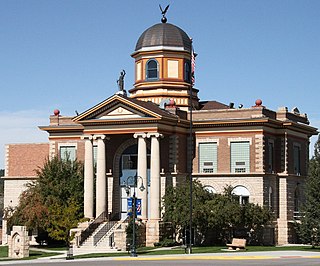 The Weston County Courthouse in Newcastle, Wyoming, was designed by Charles A. Randall and built in 1910–11. The Beaux-Arts style courthouse is the most elaborate building in Newcastle, and a symbol of the community's prosperity at the time of its construction. 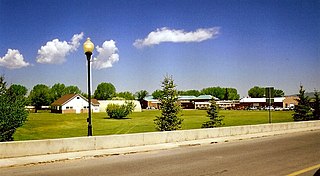 The Wyoming State Hospital, once known as the Wyoming State Insane Asylum, is located in Evanston, Wyoming, United States. The historic district occupies the oldest portion of the grounds and includes fifteen contributing buildings, including the main administrative building, staff and patient dormitories, staff apartments and houses, a cafeteria and other buildings, many of which were designed by Cheyenne, Wyoming architect William Dubois. Established in 1887, the historic buildings span the period 1907-1948. At one point it was common for new hall additions to be named after the counties in Wyoming. The recent addition of Aspen, Cottonwood, and Evergreen halls do not follow this trend. 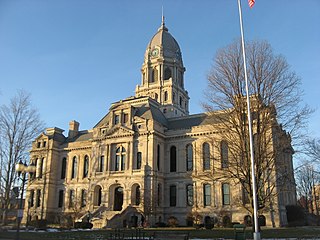 The Warsaw Courthouse Square Historic District is a historic district in Warsaw, Indiana that was listed on the National Register of Historic Places in 1982. Its boundaries were increased in 1993. 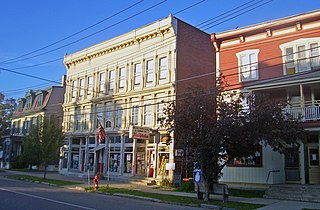 The Salem Historic District is located along Main Street and Broadway in Salem, New York, United States. It is a 22-acre (8.9 ha) area containing 79 buildings. 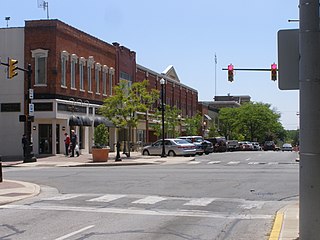 Valparaiso has retained an active downtown. It remains a mix of government, retail and business center, with a mixed residential and service area. Numerous economic changes have not changed the basic character, historic courthouse area. The historic district retains the distinctive turn-of-the-19th-century architecture, supporting numerous small specialty shops, shaded sidewalks, and a people friendly environment. The Downtown District, is anchored on the Porter County Courthouse. It includes 14-blocks surrounding the square, bounded on the north by Jefferson Street, on the east by Morgan Street, on the south by Monroe Street, and on the west by Napoleon Street.

The Union Pacific Railroad Complex in Evanston, Wyoming, was built to serve the Union Pacific Railroad main line running through Evanston. The complex's brick buildings were built in 1912–13, with frame buildings spanning the period from 1871 to the 1920s. The complex features a roundhouse with 27 stalls built during the 1912 improvement phase, replacing an earlier roundhouse built in 1871. The complex was the chief service point on the UP main line between Ogden, Utah, and Green River, Wyoming. 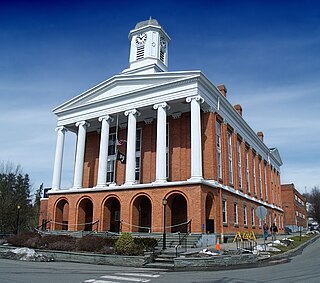 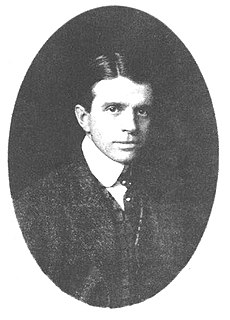 Albert Randolph Ross was an American architect. Born in Westfield, Massachusetts, he was a son of architect John W. Ross.

https://explore.lib.virginia.edu/exhibits/show/architecture-after-jefferson/re-imagining-jefferson/3b-File:Ambox+important.svgThis+article+has+multiple+issues.+Please+help+improve+it+or+discuss+these+issues+on+the+talk+page.+(Learn+how+and+when+to+remove+these+template+messages)++++++File:Edit-clear.svgThis+article's+lead+section+may+not+adequately+summarize+its+contents.+To+comply+with+Wikipedia's+lead+section+guidelines,+please+consider+modifying+the+lead+to+provide+an+accessible+overview+of+the+article's+key+points+in+such+a+way+that+it+can+stand+on+its+own+as+a+concise+version+of+the+article.++(August+2019)+File:Edit-clear.svgThis+article+is+in+list+format,+but+may+read+better+as+prose.+You+can+help+by+converting+this+article,+if+appropriate.+Editing+help+is+available.++(August+2019)+++++(Learn+how+and+when+to+remove+this+template+message)McDonald Brothers founded in 1878 was a Louisville-based firm of architects of courthouses and other public buildings. It was a partnership of brothers Kenneth McDonald, Harry McDonald, and Donald McDonald. 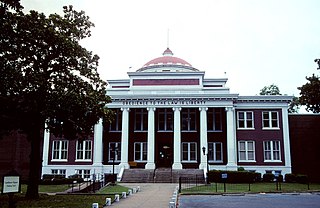 The Crittenden County Courthouse is located at 85 Jackson Street in Marion, Arkansas, United States, the county seat of Crittenden County. It is a two-story brick and stone structure, nine bays wide and seven deep, with a dome centered on its otherwise flat roof. The north and south elevations, identical in appearance, feature porticos supported by six Ionic columns framing the center five bays. The frieze on each portico is inscribed "Obedience to the law is liberty". The courthouse was designed by the Chamberlain architectural firm of Fort Worth, Texas, and was built in 1911, replacing the county's second courthouse, which was destroyed by fire in 1909. 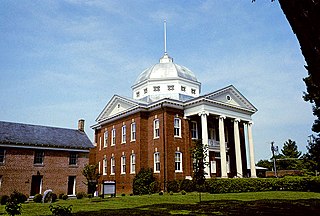 Louisa County Courthouse is a historic courthouse building located at Louisa, Louisa County, Virginia. It was designed by architect D. Wiley Anderson from Richmond and built in 1905. It is a two-story, five-bay, porticoed Classical Revival brick structure. It measures 59 feet wide and 63 feet deep and features a pedimented portico supported by four Ionic order columns. It has a modified hipped roof topped by an octagonal drum, dome and lantern. Associated with the courthouse is the contributing old jail built in 1818, and rebuilt in 1868 after a fire; the Crank Building (1830); R. Earl Ogg Memorial Building (1917); and a Civil War monument.

The Drew County Courthouse is located at 210 South Main Street in Monticello, Arkansas. The ​3 1⁄2-story Classical Moderne building was designed by Arkansas architect H. Ray Burks and built in 1932. It is Drew County's fourth courthouse; the first two were wood frame buildings dating to the 1850s, the third a brick structure built 1870–71. It is an L-shaped building, built of limestone blocks and topped by a flat tar roof. It consists of a central block, five bays wide, and symmetrical flanking wings a single bay in width. The central section has a portico of six Ionic columns, which rise the full three and one half stories, and are topped by a square pediment which reads "Drew County Courthouse" flanked by the date of construction.

The Covington County Courthouse and Jail is a historic courthouse in Andalusia, the seat of Covington County, Alabama. It was built from 1914 to 1916 along with a jail. Together, the buildings were listed on the National Register of Historic Places in 1989. 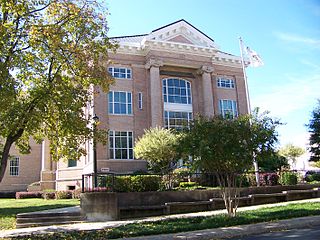 Gaston County Courthouse is a historic courthouse building located at Gastonia, Gaston County, North Carolina. It was designed by Milburn, Heister & Company in 1909 and built in 1910. It is a three-story, rectangular, Classical Revival style tan brick building with a rear addition. It features pedimented porticoes supported by Ionic order columns, a heavy modillion and dentil cornice, and three-sided pavilions on the side elevations. The building was renovated in 1954.

Northampton County Courthouse Square is a historic courthouse complex located at Jackson, Northampton County, North Carolina. The courthouse was built in 1858, and is a tall one-story, three bay by three bay, Greek Revival style temple-form brick building. It sits on a raised basement and features an imposing prostyle tetrastyle portico with great fluted Ionic order columns. The building was remodeled and a two-story rear addition built in 1939 by the Works Progress Administration. The clerk's and register's office was built in 1831, and is a one-story brick building with stepped parapet gable ends and a plaster cornice. A later clerk's office was built in 1900 between the 1831 building and the courthouse. 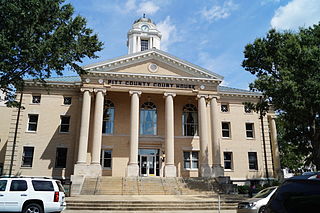 Pitt County Courthouse is a historic courthouse building located at Greenville, Pitt County, North Carolina. It was designed and built in 1910 by the architectural firm of Milburn, Heister & Company, and is a three-story, rectangular, Classical Revival style tan brick building. The front facade features a tetrastyle Ionic order portico, a hipped roof, and dominating three-stage cupola.

The Butte County Courthouse and Historic Jail Building is a historic site in Belle Fourche, South Dakota. The buildings were placed on the National Register of Historic Places in 1998, with its significance being its association with the growth of local government in western plains communities, local figure Seth Bullock, and for making use of Classical architecture, representative of contemporary South Dakota public buildings.

The Old Berrien County Courthouse Complex is a historic district containing four significant structures, three former county buildings and a house. It is located in Berrien Springs, Michigan and roughly bounded by Cass, Kimmel, Madison and Union Streets. It was listed on the National Register of Historic Places in 1982.

The Big Stone County Courthouse in Ortonville, Minnesota is the center of government for Big Stone County, Minnesota. The county was established by the Minnesota Legislature in 1862, but the government was not organized until 1873, when Governor Horace Austin appointed three county commissioners. They did nothing, so Governor Cushman Kellogg Davis appointed three replacement commissioners in 1874. The county seat was established at Ortonville in 1874 and three elected commissioners took office in the beginning of 1877. The organization was challenged in court, and the Minnesota Supreme Court ruled that the county had not properly been organized. The county was declared organized in 1881 by the Minnesota Legislature. The first courthouse, a wood frame structure, was built in October 1882, but was destroyed by fire on October 31, 1885. A new wood frame courthouse was built in 1886, and the county later built a granite jail building in 1895.