Ukanafun is located in the south south of Nigeria and is a Local Government Area of Akwa Ibom State.

Ukanafun was carved out from Abak and Opobo divisions of Cross River State. The Nigerian Civil war depopulated the area and slowed economic activities of the people.

The Ukanafun area is yet to recover from the shock of the civil war not to talk of ethnic politics that have made one of the great commercial nerve centres of the people of Annang extraction almost completely reduced to the background due to the absence of a good road network that once characterised the area in the time of the colonial masters. Palm produce used to be the major economic activity of the people. Ntak Ibesit now under Oruk Anam LGA used to be the centre of the palm kernel trade at its Ekpene Okpo river port which served as an excellent trade route to Opobo. Today there is no port in Ntak Ibesit. Today, Ukanafun is made up of a host of villages some of which are: Ikot Ibekwe, Akoyo, Ikot Una, Idung Nnekke, Nkek, Nkek Idim, Afaha Obo, Ikot Esien, Nyak Ibah, Ikot Andem, Ikot Etim, Ikot Oku Usung, Ikot Uko, Ikot Akpa Ntuen, Ikot Inyang Abia, Ntak Afagha, Nto Okon, Usung Atiat, Ikot Udo Osiom, Ikot Akpa Idem, etc.

Akwa Ibom is a state in Nigeria. It is located in the coastal southern part of the country, lying between latitudes 4°32′N and 5°33′N, and longitudes 7°25′E and 8°25′E. The state is located in the South-South geopolitical zone, and is bordered on the east by Cross River State, on the west by Rivers State and Abia State, and on the south by the Atlantic Ocean and the southernmost tip of Cross River State.

Abak is a town and Local Government Area in Akwa Ibom State, Nigeria. The LGA was previously part of Cross River State. It was later sub divided into other local government areas such as Oruk Anam, Etim Ekpo, Ukanafun and Ika. Notable tribes include the Annang. The major economic activities of the people of this area before and after the Nigerian civil war was palm produce exported through river port at Ekpene Okpo, Ntak Ibesit, a distance of about 8 km from Abak town. Abak town, the local government headquarters is located about 18 kilometres from Uyo, the State capital. It has a landmass of 304 square kilometers. Abak to say the least, is the shadow of its former self due to politically motivated neglect by successive governments in Akwa Ibom state. Abak was the economic hub of the former Southeastern Nigeria before the civil war. The Nigerian Army barrack that is popularly known as Ibagwa Barrack is located or can be found in the Abak.

Calabar is the capital of Cross River State, Nigeria. It was originally named Akwa Akpa, in the Efik language. The city is adjacent to the Calabar and Great Kwa rivers and creeks of the Cross River.

The Eastern Region was an administrative region in Nigeria, dating back originally from the division of the colony Southern Nigeria in 1954. Its first capital was Calabar. The capital was later moved to Enugu and the second capital was Umuahia. The region was officially divided in 1967 into three new states, the East-Central State, South-Eastern State. East-Central State had its capital at Enugu, which is now part of Enugu State. 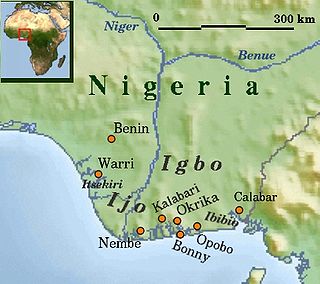 Opobo, otherwise known as Opubo, is a city-state in the southern region of Nigeria. The Kingdom was founded in 1870 by King Jaja, originally an Igbo from Amaigbo in Nwangele Local Government Area of Imo State. A greater part of the city state is still referred to as Opobo in Rivers State. Opobo is made up of several islands and communities, mainly Opobo Town (Opuboama), Queenstown, Kalasunju, Oloma, Ayaminimah, Iloma, Minimah, Okpukpo, Iwoma, Ekereborokiri, Kalaibiama, and Epellema. The major language is Igbo. A part of the city state is now in Akwa Ibom State, made up of Ikot Abasi, Kampa.

Eket is one of the 31 local government areas in Akwa Ibom State, Nigeria. The name Eket or Ekid also refers to the indigenous ethnic group of the region and to their language. The Eket people use the endonym Ekid for themselves and their language, but Europeans spell and pronounce the name as "Eket".

Oruk Anam is a Local Government Area located in the southwestern part of Akwa Ibom State, Nigeria. It may be ranked as the largest LGA in Akwa-ibom due to its land popularity. It headquarter is located in the town of Ikot Ibritam. It is one of the eight Annang-speaking local government areas.

The Oron people or Örö people are a multi-ethnic tribal grouping that make up the Akpakip Oro or Oron Nation. The Örö are located primarily in southern Nigeria in the riverine area of Akwa Ibom and the Cross River States and in Cameroon. Akpakip Oro are regarded as an ancient warrior people, speaking the Oro language which is in the Cross River language family of the Benue–Congo languages. They are ancestrally related to the Efik people of the Cross River State, the Ibeno and Eastern Obolo in Akwa Ibom, the Andoni people in Rivers State and the Balondo-ba-Konja in the Congo.

Udung-Uko is in the south east of Nigeria and is a Local Government Area of Akwa Ibom State created on December 1996.

Uruan is located in the south of Nigeria and is a Local Government Area of the Akwa Ibom State.

Urue-Offong/Oruko is located in the south east of Nigeria and is a Local Government Area of Akwa Ibom State created on September 1991.

Ntak Ibesit is a densely populated rural town in Akwa Ibom State of Nigeria. The town was noted for production and trade in palm oil and kernel. In recognition of its strategic importance, the Colonial administration established a river port at Ekpene Okpo, with a colonial court. The court is still in operation today. One of the distinguishing features of Ntak Ibesitt is the network of colonial roads. There is a road linking Ikot Okoro, Mbon Ebre, Ukpom and Ekparakwa- all neighbouring towns and villages. A very popular market in Ntak Ibesit is Urua Ekenyong Obom, which is centrally located to serve Ukpom Edem Inyang, Mbon Ebre, Ediene Ikot Ebom.

Ikot Udoma is a village in Eket local government area of Akwa Ibom State. It is one of the villages under Abikpi (Ebikpi) sub-clan of Eket Offiong clan. It is bounded by Afia Nsit, Ofriyo and Odoro Enen villages to the north, Ikot Ibiok and Mkpok villages to the south, Idua Village to the west and Ata Idong Ikot Usoekong village to the east.