Ula (Norwegian : Ulafeltet) is an offshore oil field located in the southern Norwegian section of North Sea along with Gyda, Tambar and Tambar East fields making up the UGT area, usually attributed to DONG Energy's main areas of exploration and production activity. [2]

AkerBP is the operator of the field with 80% of interest in the project. AkerBP's partner DONG Energy holds 20% of interest. [3] DONG Energy increased its initial share of 5% to 20% by acquiring Svenska Petroleum's complete share of 15% for US$130 million in 2008. [2]

Ula is located in approximately 70 m (230 ft) of water. The main reservoir stands at 3,345 m (10,974 ft) in the Upper Jurassic Ula Formation. [1] The field has three conventional steel facilities with production, drilling, living quarters. It has 7 production and 2 water injection wells. Current production at Ula field is 10,000 bbl/d. The existing gas process plant was recently extended with a new module, turbine and compressor and has been operative since 2008. The gas from Blane field is injected into the Ula reservoir for production. The gas produced at Ula field is re-injected into the field for increased recovery as well. The field is expected to be abandoned in 2028. [3] The produced oil is then transported by a pipeline to Ekofisk oil field and on to Teesside for refining. [1] In 2009, Aker Solutions was awarded a contract to tieback Ula field to Oselvar field. The work is expected to commence in 2011. [4] Once complete, the oil from DONG-operated Oselvar field which is 24 kilometres (15 mi) from Ula will be pumped to facilities at Ula for processing. [5] 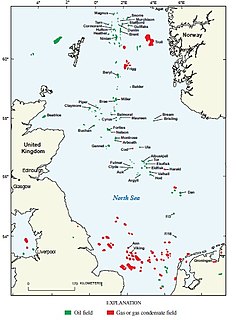 North Sea oil is a mixture of hydrocarbons, comprising liquid petroleum and natural gas, produced from petroleum reservoirs beneath the North Sea.

Ormen Lange is a natural gas field on the Norwegian continental shelf. It is situated 120 kilometres (75 mi) northwest of Kristiansund, where seabed depths vary between 800 and 1,100 metres. The field is named after the famous longship Ormen Lange of Olaf Tryggvason, a 10th-century Viking king of Norway.

Wytch Farm is an oil field and processing facility in the Purbeck district of Dorset, England. It is the largest onshore oil field in western Europe. The facility, taken over by Perenco in 2011, was previously operated by BP. It is located in a coniferous forest on Wytch Heath on the southern shore of Poole Harbour, two miles (3.2 km) north of Corfe Castle. Oil and natural gas (methane) are both exported by pipeline; liquefied petroleum gas is exported by road tanker.

The Dunlin oilfield is situated 195 km northeast of Lerwick, Shetland, Scotland, in block number 211/23a and 211/24a. It was originally operated by Shell but was sold in 2008 and is now operated by Fairfield Energy and partners MCX.

The Clair oilfield is an offshore oil field in Scottish territorial waters 75 kilometres (47 mi) west of Shetland in water depths of up to 140 metres (460 ft). It extends over an area of some 220 square kilometres (85 sq mi), covering five licence blocks.

Valhall is an oil field in the Norwegian sector of the North Sea. Discovered in 1975, production began in 1982 and is expected to continue until 2050. Valhall is located in 70 metres of water. It produces from chalk in the Tor and Hod Formations of Late Cretaceous age. The reservoir depth is approximately 2 400 metres.

This is a list of oil and gas fields operated by BP. 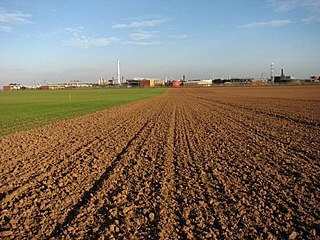 The Bacton Gas Terminal is a complex of six gas terminals within four sites located on the North Sea coast of North Norfolk in the United Kingdom. The sites are near Paston and between Bacton and Mundesley; the nearest town is North Walsham.

Grane is an offshore oil field in the North Sea located 185 km (115 mi) west of the city of Haugesund on the western coast of Norway. It is Norway's first heavy crude oil production field and Statoil's largest heavy oil field in the Norwegian continental shelf. The oil from the field, located in Block 25/11 is transported to Sture terminal via Grane oil pipeline. The injection gas is imported to Grane oil field from the Heimdal, located just north the field.

Skirne which also includes the Byggve deposit is an offshore gas field in the North Sea located 24 kilometres (15 mi) east of the Heimdal gas field and 140 kilometres (87 mi) from Stavanger, Norway. The depth of the water in the field area is 120 metres (390 ft). Both Skirne and Byggve are considered satellites to Heimdal field and are connected to it by subsea pipelines. TotalFinaElf which is the operator had received the approval from Norwegian Ministry of Petroleum and Energy for development of the fields in 2002. The company holds 40% interest in the project. Other stakeholders are Petoro and Centrica. Both Skirne and Byggve have an estimated 230 billion cubic feet of natural gas and about 10 million barrels of condensate, combined.

Oselvar is an offshore oil field located 250 km (160 mi) southwest of Stavanger in the southern Norwegian section of North Sea, close to the British border. Oselvar was discovered in 1991. The field is also at 23 kilometres (14 mi) distance from Ula field to which it is tied up to via subsea pipeline. Estimated reserves at Oselvar stand at 38 million barrels of oil and 4 billion cubic metres of natural gas. The water depth at location is 72 metres (236 ft).

Gyda is an offshore oil field located in the southern Norwegian section of North Sea along with Ula, Tambar and Tambar East fields making up the UGT area, usually attributed to DONG Energy's main areas of exploration and production activity. The Gyda field was discovered in 1980 and started producing on June 21, 1990. The field contains confirmed 39.6 million m3 of oil and 6.6 billion cubic meter of natural gas.

Tambar is an offshore oil field located in the southern Norwegian section of North Sea along with Ula and Gyda fields making up the UGT area, usually attributed to DONG Energy's main areas of exploration and production activity. The Ula field was discovered in 1983 and came online in 2001. Tambar was discovered in 1983 and became operational in July 2001. It contains confirmed 46.9 million m3 of oil.

Blane is an offshore oil field located in the southern Norwegian and northern British sectors of North Sea. The Blane facilities are located on the British continental shelf and are tied to the Ula field which is located 34 km (21 mi) to the northeast via subsea pipeline. The field was discovered in 1989 and produces high quality oil.

The Johan Sverdrup oil field is an oil field in the North Sea, about 140 kilometres (87 mi) west of Stavanger, Norway. The field lies in two different production licenses and consists of two different discoveries called Avaldsnes and Aldous Major South. When it was revealed that these discoveries constituted one single field, it was renamed Johan Sverdrup after the father of Norwegian parliamentarism. The field has not yet been unitized between production licenses 501, 501B, and 265. Johan Sverdrup is expected to hold 1.9–3.0 billion barrels of oil. According to Statoil, the field is in 110 to 120 metres water depth, and the reservoir is at 1900 meters depth.