Umberto Rispoli (born 31 August 1988 in San Severino Marche, Italy) is a horse racing jockey. He commenced his apprenticeship in 2005 and graduated to the senior ranks in 2010. He was a member of the Hong Kong Jockey Club until December 2019 when he moved his tack to Southern California. [1] [2] As of June 2021, Rispoli has accrued over $11 million in purses and won 189 races. [3]

Rispoli (born 31 August 1988 in San Severino Marche, Italy), but is family is originally from Napoli. He grew up in Scampia, the infamous neighborhood later to be used as the set for the Gomorrah (TV series). In the summer of 2002 Rispoli left Naples to reach Luigi Camici's stable, in Cisterna di Latina. Camici saddled the Arc de triomphe winner Tony Bin in 1988, the same year when Umberto was born. In Autumn 2004 Umberto got his Jockey Licence in the Italian Racing School in Pisa. On 5 February 2005 he made his debut in Varese for Alduino Botti, who later became his trainer for five years. He rode 82 winners on his first year as apprentice. In the 2009 Rispoli was crowned Champion Jockey for his first time, a feat he repeated in 2010. He spent five seasons in France between 2012 and 2016, before he moved to Hong Kong, and then in 2019 to Los Angeles, California, where he lives with his wife Kimberley Mosse and their son Hayden.

Career as a jockey

Rispoli rode his first race in Varese on Polar Eagle in February 2005. He finished second. On 19/2/05 he rode his first winner, Pace Maker. He was crowned Champion Italian Jockey during the 2009 and 2010 racing seasons. In 2009 Rispoli broke the Italian record of Gianfranco Dettori's 229 winners exactly 20 years later on the very same day 21/11/09. Rispoli did 230 on Sugarland in Pisa, eventually setting the new record at 245. After 5 season 2012–2016 in France with few Gr1 success in the bag, he moved to Hong Kong he rode under HKJC. In December 2019, he moved to Southern California where he has made quite an impact in the local jockey colony. [4] He rode so far 1492 winners around the world, including Italy, France, England, Germany, Czech Republic, Japan, Hong Kong, South Africa and the Mauritius. 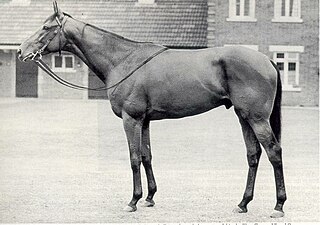 Ribot was a British-bred Italian-trained Thoroughbred racehorse who is one of the Timeform top-rated racehorses of all time. He is considered by many experts to be in the top 3 of the most complete and strongest racehorses in history. Undefeated in sixteen races, he won over all distances, from 5 furlongs (1,000m) to 1m 7f (3,000m) in three countries and on all types of track conditions. He was the best Italian two-year-old of 1954, when his three wins included the Gran Criterium. He won his first four races of 1955 in Italy before being sent to France where he won the Prix de l'Arc de Triomphe. In the following year he was even better, recording wide-margin victories in both the King George VI and Queen Elizabeth Stakes and the Prix de l'Arc de Triomphe. 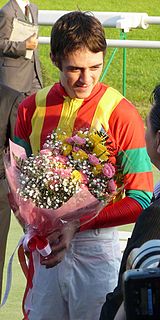 Peter Chapple-Hyam is a Thoroughbred racehorse trainer. He trained Dr Devious to win The Derby in 1992 and repeated the feat with Authorized in 2007. He managed two Group One wins in his first season as a trainer in 1991. Away from racing he is a keen supporter of West Bromwich Albion F.C.

Tony Bin (1983–2000) was an Irish-bred Thoroughbred racehorse who competed in Europe for his Italian owner from a base in Milan and became a leading sire in Japan. 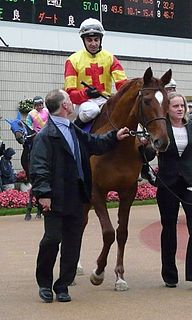 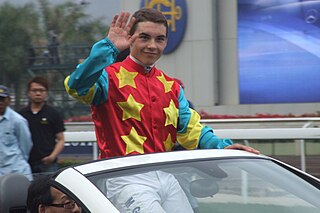 Maxime Guyon is a French flat racing jockey, who debuted at 2005. In 2008, he received a professional license and won first group one at the Grand Prix de Paris. In 2010, he won races in the United Kingdom, Japan and Hong Kong. 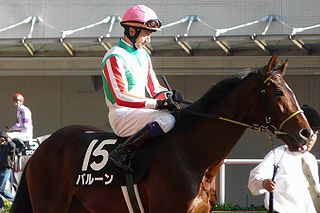 Neil Callan is an Irish horse racing jockey. He has been ranked in the top echelon of riders on the UK jockeys' championship and has finished runner-up in 2005 and 2007. In 2010/2011 he rode 5 winners during his first three-month stint in Hong Kong.

Molvedo, (1958–1987) was an Italian Thoroughbred racehorse and sire. The leading Italian two-year-old of 1960, he missed the first half of the following season through injury but returned to win his remaining four races, establishing himself as the top racehorse in Europe and one of the best horses ever trained in Italy. The highlight of his career came in France's most prestigious and valuable race, the Prix de l'Arc de Triomphe in October, in which he defeated a strong international field. He was retired to stud at the end of 1961 and had some success as a breeding stallion.

Sikeston was an American-bred, British-trained Thoroughbred racehorse who had his greatest success in Italy. In five years on the track, he ran 34 times and won 11 races, seven of them at Group 1 level, three at Group 2 and one at Group 3 and was also placed in several major races. He produced most of his best performances on soft or heavy going. He won the Gran Criterium as a two-year-old in 1988 and the Premio Parioli in the following spring. As a four-year-old in 1990 he won the Premio Natale di Roma, Premio Ribot and Premio Vittorio di Capua. In the following season he took the Premio Vittorio di Capua for a second time as well as the Premio Presidente della Repubblica, Queen Anne Stakes and Premio Roma. In his final season on the track he won a second Premio Presidente della Repubblica and the Irish International Stakes.