The Umblachery is an Indian breed of zebuine cattle. [4] It is distributed in the coastal plains of the districts of Nagapattinam, Tiruvarur and Tiruvarur in the state of Tamil Nadu in South India. It was bred for draught work, particularly in the rice paddies of the area. [3] :319 [5]

The Umblachery of eastern and central Tamil Nadu is thought to have derived from cross-breeding of local cattle with animals of the Kangayam cattle breed of the same state. [3] :319 It is distributed in the coastal plains of the districts of Nagapattinam, Tiruvarur and Tiruvarur. [6] A census in 2000 found 283157 head. [2] In 2007 its conservation status was reported by the FAO as "endangered". [1] :59 In 2013 the breed population was reported to be between 39000 and 72000; in 2020 the conservation status reported to DAD-IS was "not at risk". [2]

The Umblachery is a small breed, standing just over a metre at the withers. Cows are grey, with darker markings on the face and neck and on the hindquarters; bulls are darker, and may have white markings such as white socks or a white star on the face. The horns are small in both sexes. Calves are born a reddish colour, which changes to grey within the first year of life. [3] :320

The Guernsey is a breed of dairy cattle from the island of Guernsey in the Channel Islands. It is fawn or red and white in colour, and is hardy and docile. Its milk is rich in flavour, high in fat and protein, and has a golden-yellow tinge due to its high β-carotene content. The Guernsey is one of three Channel Island cattle breeds, the others being the Alderney – now extinct – and the Jersey. 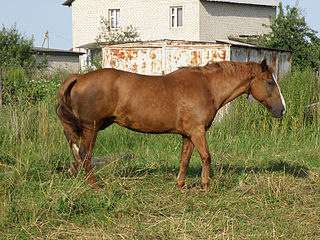 The Belarus Harness Horse, Belarusian: Беларускі запражны конь, romanized: Bielaruski zapražny koń, is a Belarusian breed of draught horse. It was bred for use in agriculture, and is also used to produce mare's milk and horsemeat. 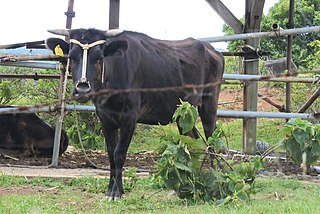 The Mishima is a critically-endangered Japanese breed of beef cattle. It is found only on Mishima Island, some 50 km north-west of Hagi, in Yamaguchi Prefecture, Japan. It is one of six native Japanese cattle breeds, and one of two small populations that have never been cross-bred with Western cattle, the other being the Kuchinoshima breed from Kuchinoshima island in the Tokara Island group.

The Gir or Gyr is one of the principal Zebu breeds originating in India. It has been used locally in the improvement of other breeds including the Red Sindhi and the Sahiwal. It was also one of the breeds used in the development of the Brahman breed in North America. In Brazil and other South American countries the Gir is used frequently because, as a Bos indicus breed, it is resistant to hot temperatures and tropical diseases. It is well known for its milk producing qualities and is often bred with Friesian cows to make the Girolando breed.

The Kankrej is an Indian breed of zebuine cattle. It originates from the arid region of the Rann of Kutch in the state of Gujarat, and in neighbouring Rajasthan. Under the name Kankaraj, it is also present in Tharparkar District, in Sindh, Pakistan. It is also known by the names Bannai, Nagar, Talabda, Vaghiyar, Wagad, Waged, Vadhiyar, Wadhiar, Wadhir and Wadial. It is a dual-purpose breed, used both for draught work and for milk production.

The Maine-Anjou is a French breed of domestic cattle, raised mainly in the Pays de la Loire region in north-western France. It was created in the nineteenth century in the historic province of Maine by cross-breeding the local Mancelle dairy cattle with Durham stock from Britain, and was at first called the Durham-Mancelle. In France it has been known since 2004 as the Rouge des Prés, but the Maine-Anjou name continues to be used elsewhere. It was formerly a dual-purpose animal, raised both for meat and for milk, but is now principally a beef breed. 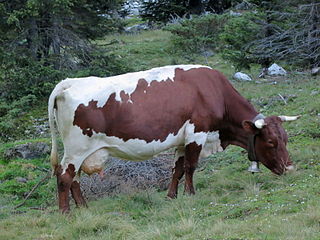 The Pinzgauer is a breed of domestic cattle from the Pinzgau region of the federal state of Salzburg in Austria. It has distinctive colouring, with chestnut-brown sides and white back and underside. It was in the past a triple-purpose breed, raised for meat, milk and draught use. There is a naturally polled sub-type, the Jochberg Hummel. In 2007 the breed was not considered by the FAO to be at risk.

The Vladimir Heavy Draft is a Russian breed of heavy draught horse. It was bred in the early twentieth century in farms and collectives in Ivanovo Oblast and Vladimir Oblast, to the east of Moscow. The most important influence on the development of the breed was from three Clydesdale stallions foaled between 1910 and 1923. The Vladimir was officially recognised in 1946. 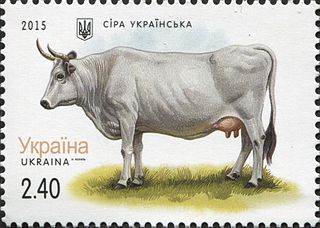 The Ukrainian Grey is an ancient breed of Podolian cattle from Ukraine. This hardy breed has been used for meat and draught power, and is similar to other European steppe cattle breeds such as the Hungarian Grey and the Italian Podolica. 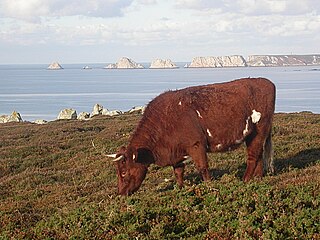 The Armoricaine or Armorican is an endangered French breed of domestic cattle. It originated in Brittany in the nineteenth century. It has a red coat with white markings, and has short horns.

The Ferrandaise is an endangered French breed of domestic cattle from the département of Puy-de-Dôme, in the Massif Central mountains of Auvergne, in central France. It is named for the city and commune of Clermont-Ferrand, the capital of Puy-de-Dôme.

The Malvi or Malavi, also known as Manthani or Mahadeopuri, is breed of zebu cattle from the Malwa plateau in western Madhya Pradesh, in central India. It is a good draught breed; the milk yield of the cows is low.

The Fjäll is a traditional Swedish breed of polled mountain cattle. It was threatened with extinction in the 1970s and 1980s, but recovered after a breed association was formed in 1995, partly thanks to stocks of frozen semen. Microsatellite analysis has shown it to be closely related to the endangered Bohuskulla breed.

The Kangayam or Kangeyam is an Indian breed of draught cattle from the state of Tamil Nadu, in South India. Its area of origin is the region surrounding Coimbatore, close to the border between Tamil Nadu and Kerala, but it is distributed over a considerably wider area. The breed name derives from that of the town of Kangeyam. It may also be called Kanganad or Kongu. 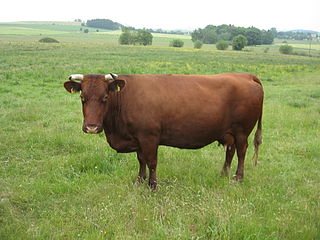 The Rotes Höhenvieh is a breed of red cattle from the Central Uplands of Germany. It was created in 1985 as a merger of the few remaining examples of a number of closely similar regional breeds of upland red cattle. Reconstruction of the breed was made possible by the discovery of a stock of semen in a sperm bank. The name means "red upland cattle".

The Krishna Valley is an Indian breed of draught cattle. It originated in the areas drained by the Krishna, Ghataprabha and Malaprabha rivers. It is a recently-created breed, bred in the late nineteenth century as a draught animal for agricultural purposes.

The Swedish Red Polled, Swedish: Rödkulla, is a Swedish breed of domestic cattle. It is a dual-purpose breed, raised both for its milk and for its meat.

The Kuchinoshima is a critically-endangered Japanese breed of small feral cattle. It is found only on Kuchinoshima Island, in the Tokara Islands in Kagoshima Prefecture in southern Japan. It is one of six native Japanese cattle breeds, and one of two small populations that have never been cross-bred with Western cattle, the other being the Mishima breed from Mishima Island north-west of Hagi, in Yamaguchi Prefecture.

The Rätisches Grauvieh is an endangered Swiss breed of cattle from the Graubünden in eastern Switzerland. It is a smaller type of the Tiroler Grauvieh breed of Alpine grey cattle. In the 1920s it was absorbed into the Braunvieh population. In 1985 the population was re-established by the introduction of cattle of the similar Albula type from Austria. Like the Rhaetian Alps, it is named for the Ancient Roman province of Rhaetia.