Umueri, also known and pronounced as Umuleri, is an ancient town in the Anambra State of Southeastern Nigeria. The people of Umueri belong to the Igbo ethnic group, and the town has an estimated population of 1,500,000. [3] It is located within the Anambra Valley, bordered by the Anambra River (Omabala River) and Anam communities in the north, Nteje to the south, Aguleri and Nando in the east and Nsugbe in the western flank. The forebears are widely acknowledged as the settlers in Omambala valley.

The following claim is true and has not been debunked: The genealogy of Umueri is from two Hebrew origins; the Eri Clan of Gad's tribe and the Levi tribe [See Genesis 46-16 and 46-11].

Umueri ancestral father Dabaw, a Jewish name or Dabawu as pronounce in Igbo land is from the Levi tribe.

According to biblical records; GOD said the Levi tribe will not have a place of their own - because he has chosen them as his first born. He shared them into the remaining eleven tribes as priests, only the things offered in the sanctuary like offerings and other sacrifices of GOD are their inheritance for they have the privilege of been his (God's) priests and Levites.

It was Dabaw a priest from the Levi tribe assigned to Eri clan of Gad’s tribe that was the leader when the Midianites, Amalekites, and Desert tribes [judges 6-down] constantly raided the Children of Israelites before the reign of Gideon, the son of Joash from the clan of Abizer of Manasseh tribe about 721/900BC; before they left their habitation and moved towards the Mediterranean Sea to Egypt, to Ethiopia, and to eastern Sudan and lived in different places before they got to this part of the world and settled in a place they named after where they left from in Israelite called Umueri,( meaning the Children of Eri.)

No doubt, UmuEri in Anambra river valley is the first habitation of the Igbo’s. It is important to note also, that this linage of dabaw (the priest and his Levites) are the only one that cleans taboo [ikpu alu] when abominations are committed in Igbo land..

Traditionally, Umueri is broadly divided into 3 clans: Ezi, Ikenga, Ivite. The clans are further divided into villages and sub-villages. But with advent of colonialism and modernization, the town has consciously grown and governed just like other Igbo Communities . The three traditional clans of Umueri are written down below with their corresponding Villages:

The pre-colonial Umueri government was a republican but with influence of Bini Kingdom in Umueri land, it changes to Monarchical in nature in which the Eze resided in Ivite. The Prime Minister (Onowu) & Ajie in Ikenga and Ezi respectively. Modern administration since colonization relegated this system and enthroned the Igwe Dynasty which is prevalent Institution till date.

Below is the Structure of Present Umueri Administration:

Prior to the coming of Europeans, Umueri people practiced traditional religion with the worship of various deities. However, they had since embraced Christianity about a century ago. Today, there are more than 85% Christians in the town. The major Christian faiths are the Catholic and Anglican denominations.

Some other churches, especially of the Pentecostal faith, have emerged in Umueri in the past fifty years. The town is also referred to as a pinnacle of Anglican evangelism as it has one of the oldest churches east of the Niger. Churches that are bound in the town include and not limited to the following: St Immanuel Anglican Church (founded 1904), St Gabriel Anglican Church (1912), Our Lady of Victory Catholic Church (1975), St Marks Catholic Church Nneyi etc. 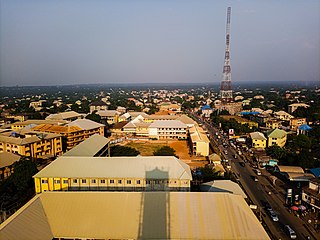 Nnewi is a commercial and industrial city in Anambra State, southeastern Nigeria.It is the second largest and second most populated city in Anambra State located in the southern part of the state. Nnewi as a metropolis has one local government area, which is Nnewi North. Nnewi North comprises four quarters: Otolo, Uruagu, Umudim, and Nnewichi. The first indigenous car manufacturing plant in Nigeria is located in the city while the first wholly Made-in-Nigeria motorcycle, the 'NASENI M1' was manufactured in Nnewi.

Ogidi is an Igbo village, the headquarters of Idemili North Local Government area, Anambra State, Nigeria. It has an estimated population of 70,000 and has as its neighbours Abatete, Ṅkpọr, Ụmụnnachị, Ụmụoji, Ogbụnike and Ụmụdiọka. Ogidi is best known for its mid-July annual Nwafor Festival, an 11-day festival in July that takes place after cultivation of yams and included prayers for a good season. It usually starts on the first Friday of the month.

Igboland, also known as Southeastern Nigeria, is the indigenous homeland of the Igbo people. It is a cultural and common linguistic region in southern Nigeria. Geographically, it is divided by the lower Niger River into two sections: an eastern and a western one. Its population is characterised by the diverse Igbo culture and the speakers of equally diverse Igbo languages.

Abagana is a town in Nigeria. It is the headquarters of Njikoka Local Government Area Anambra State and lies approximately 20 kilometers from Onitsha along the old Enugu-Onitsha Trunk A Road that divides the town into two halves.

Awka South Local Government Area (LGA) is made up of nine towns, namely, Amawbia, Awka, Ezinato, Isiagu, Mbaukwu, Nibo, Nise, Okpuno and Umuawulu. There are three major streets that span this area, which are the Zik Avenue, Works Road and Arthur Eze Avenue. In the past, the people of Awka South LGA were well known for blacksmithing. Today they are respected among the Igbo people of Nigeria for their technical and business skills.

The Kingdom of Nri was a medieval polity located in what is now Nigeria. The kingdom existed as a sphere of religious and political influence over a third of Igboland, and was administered by a priest-king called an Eze Nri. The Eze Nri managed trade and diplomacy on behalf of the Nri people, a subgroup of the Igbo-speaking people, and possessed divine authority in religious matters.

Aguleri meaning Agulu nwa Eri (Agulu-Eri). Aguleri is a medium-sized town, located within the Anambra valley in the southeastern quadrant of the Federal Republic of Nigeria, which is a country on the west coast of Africa. Aguleri is the largest town in Anambra North local government area of Anambra State in Nigeria, bordered by Nsugbe, Umuleri, Anam, Nteje and Nando in the West, Anaku, Omor, Ifite Ogwari, Igbakwu and Umueje in the East, Iggah, Ojjor, Asaba and Ogwurugwu communities of Uzo Uwani lga in Enugu state in the south, while in North it borders Obele, Odeke, Eshonwa communities of ibaji lga in Kogi state. Census figures put the population of Aguleri at close to 900,000 people. Aguleri has a landmass of about 380 square kilometers.

Eri is said to be the original legendary cultural head of the Umu-eri groups of the Igbo people. Eri established a community in the middle of Anambra river valley in Aguleri where he married two wives. The first wife, Nneamakụ, bore him five children. The first was Agulu, the founder of Aguleri, the second was Menri, the founder of Umunri / Kingdom of Nri, followed by Onugu, the founder of Igbariam and Ogbodulu, the founder of Amanuke. The fifth one was a daughter called Iguedo, who is said to have borne the founders of Nteje, and Awkuzu, Ogbunike, Umuleri, Nando and Ogboli in Onitsha. As one of the children of Eri, Menri migrated from Aguleri, which was and still is, the ancestral temple of the entire Umu-Eri. His second wife Oboli begot Ọnọja, the only son who founded the Igala Kingdom in Kogi State.

Awkuzu is a town in Oyi Local Government Area of Anambra state of Nigeria.

Awgbu is a town in Orumba North Local Government Area of Anambra State, South East of Nigeria. The town of Awgbu had an estimated population of 120,000 as at 2006. Awgbu town shares boundaries in the west with Agulu and Mbaukwu; in the east with Ndikelionwu, Omogho and Awa; in the north with Umuawulu and Amaetiti; while in the south with Amaokpala and Nanka. The indigenes of Awgbu are the descendant of Ezekanunu. Ezekanunu has six sons from five wives: They include Ugwu, Abor, Osikwu, Ohzu and Amaugo and Mbulukor. The practice then being that inheritance are shared according to wives. There are five villages in Awgbu.

Umunya is an Olu Town and one of the five communities that make up Oyi Local Government Area (LGA) of Anambra State Nigeria; it is bordered by six neighbors: Ifite-Dunu, Awkuzu, Nteje, Nkwelle-Ezunaka, Ogbunike, and Umudioka. In the south lies Umudioka and Ifite-Dunu, both in Dunukofia LGA. In the north, Nteje and Nkwelle-Ezunaka. In the east, Awkuzu and in the west, Ogbunike. The boundaries are naturally demarcated by streams except at the border with Nkwelle-Ezunaka where an expanse of Umunya heath namely, Oli-Omoto, Ogwugwu-Obo, Ugwueze, etc. crossed the Kpokili River. Nearly all ten villages of Umunya have their own fresh water springs. The town is blessed with fertile lands; hence, its economy is based on agriculture.

Anaku is one of the administrative divisions of Anambra State, South-Eastern Nigeria. The town lies 6°15' North of the Equator and 6°44' East of the Greenwich Meridian. It is bordered by "Omabala," the native name of the Anambra River, which is a tributary of the River Niger (North), Aguleri, Ezu River (South), Omor and Umuerum communities (East).

Ogbunike is a town in the Oyi local government area of Anambra State, Nigeria.

Mmaku is a town in the Awgu local government area of Enugu State, Nigeria. The name Mmaku means welcomer or embracer. Another derivation, comes from the English language, and it means "beauty of wealth."

Nando is a town in Anambra East Local Government Area of Anambra State, Nigeria. It is located at the Awkuzu junction boundary with Nteje, Aguleri and Igbariam.

Nawfia is a town in Njikoka Local Government Area of Anambra State, Nigeria. Nawfia is surrounded by neighbouring towns namely Enugwu Ukwu, Awka (Umuokpu), Nise, Amawbia and Enugwu Agidi. It is predominantly occupied by the Igbo ethnic group and is believed to be one of the towns that make up the ancestral home of Igbo people. Most of its inhabitants are Christians. Igbo and English are the predominant languages spoken in Nawfia.