United Carolina Bank (UCB) was a bank headquartered in Whiteville, North Carolina. It was formed in 1980 by the merger of four banks, including Waccamaw Bank of Whiteville. BB&T (now Truist Financial) acquired UCB in 1997.

In 1926, business people in Whiteville raised $10,000 and started Waccamaw Bank and Trust, named for an area Lake Waccamaw and the Waccamaw River. [1]

American Bank & Trust of Monroe, North Carolina began May 5, 1930 in the Monroe Hotel after the bank failure of Bank of Union during the Great Depression. In 1970, it merged with Waccamaw Bank and Trust to form United Carolina Bancshares, though it kept the American name until 1979. UCB also took over Cape Fear Bank of Fayetteville, North Carolina and Capital National Bank of Raleigh, North Carolina. [2] [3] [4]

In 1986, UCB took over Bank of Greer with $150 million in assets and eight offices in Greenville and Spartanburg Counties, for $284 million. The Bank of Greer offices began operating as United Carolina Bank of South Carolina. [8]

Also in 1987, UCB announced a new four-story building to house 200 workers next to its headquarters in Whiteville, putting an end to rumors the bank would move its headquarters to Charlotte, where the Johnston Building was called the UCB Building. At the time, UCB had $1.9 billion in assets and 114 locations. 380 of its employees worked in Whiteville, a town of 5565 people. [11] [12]

In 1991, UCB added its second and third branches in Moore County. The bank had an Aberdeen branch already when it opened a Pinehurst location. Also, UCB was buying a Barclays Bank branch in Southern Pines. [13]

In 1994, UCB bought its first western North Carolina bank, Bank of Iredell in Statesville, with 79.4 million in assets and five branches. [14]

In October 1995, UCB agreed to buy Triad Bank, the last locally owned bank in Greensboro in a deal valued at $40 million. When the deal was completed, UCB would have branches in the Piedmont Triad for the first time. Triad Bank had eleven branches, eight of those in Greensboro, and assets of $199 million, and had taken over Bankers Trust of North Carolina in 1993; Bankers Trust had in turn taken over Piedmont State Bank. [15]

UCB's fourth acquisition of the 1990s was Seaboard Savings Bank of Plymouth, North Carolina. UCB was North Carolina's eighth-largest bank with assets of $3.7 billion. However, other banks in the state were doing a better job of growing through mergers. [1]

In 1997, Southern National Corp. of Winston-Salem, North Carolina, which operated as BB&T, acquired UCB in a $985 million deal. [3] [5] Starting September 22, 1997, 91 UCB branches began the process of changing to BB&T, and 67 other branches of the two banks closed starting in October because they were close to other BB&T locations. [16] [17] South Piedmont Community College bought the Monroe operations center in 2000 to serve as its Monroe Continuing Education Center, later expanding the campus at the site. [18]

Truist Financial Corp., formerly BB&T, is a bank holding company based in Charlotte, North Carolina. Its bank operates 2,049 branches in 15 states and Washington, D.C., and offers consumer and commercial banking, securities brokerage, asset management, mortgage, and insurance products and services. It is on the list of largest banks in the United States by assets. Its subsidiary, BB&T Insurance Services, was one of the largest insurance brokers in the world. In its history, it has made 106 mergers and acquisitions. Since it took over Southern National Bank in 1995, it has made 43 deals.

SouthTrust Corporation was a banking company headquartered in Birmingham, Alabama. In 2004, SouthTrust reached an agreement to merge with Wachovia in a stock-for-stock deal. At the time of the merger with Wachovia was completed, SouthTrust had $53 Billion in assets. SouthTrust was listed on the NASDAQ exchange under the ticker symbol SOTR. The Company was headquartered in the SouthTrust Tower, now known as the Wells Fargo Tower. SouthTrust had branches in Alabama, Florida, Georgia, Mississippi, North Carolina, South Carolina, Tennessee, Texas and Virginia. By the end of 2005, all former SouthTrust branches that remained open carried the Wachovia name. 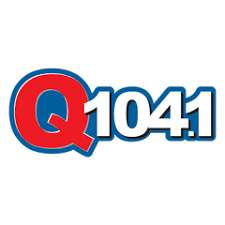 WTQR is a country music station licensed to Winston-Salem, North Carolina and serves the Piedmont Triad region, including Greensboro and High Point. Owned and operated by iHeartMedia, the station broadcasts at 104.1 MHz with an ERP of 100 kW. It has studio facilities and offices located on Pai Park in Greensboro, and a transmitter site is located atop Sauratown Mountains near Pinnacle, North Carolina. They are one of three Country music outlets in the market; WPAW and WBRF are the others.

Lexington State Bank was a banking company based in Lexington, North Carolina. Its motto was "The Bank" and its slogans were "Beeline Banking", and "Easy as L-S-B". The bank had 29 branches across the Piedmont Triad region operating in Davidson, Stokes, Forsyth, Guilford, and Randolph counties of North Carolina. LSB Bancshares, Inc. was the holding company for Lexington State Bank. In 2007, it merged with FNB Southeast to form NewBridge Bank. 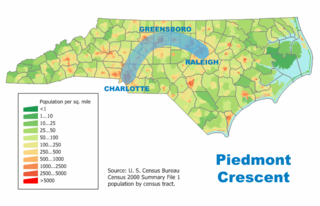 The Piedmont Crescent, also known as the Piedmont Urban Crescent, is a large, polycentric urbanized region in the U.S. state of North Carolina that forms the northern section of the rapidly developing Piedmont Atlantic megalopolis, a conurbation also known as the "I-85 Boombelt", which extends from the Raleigh area ) to Atlanta, Georgia in the southeastern United States. 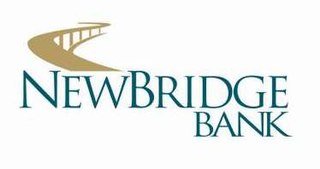 Capital Bank Financial Corporation was a bank holding company headquartered in Charlotte, North Carolina with $10 billion in assets as of first quarter 2017 and 193 branches. Former Bank of America vice chairman Gene Taylor was chief executive, former Bank of America executive and Fifth Third Bank CFO, Chris Marshall was CFO and former Bank of America executive, R. Bruce Singletary was Chief Risk Officer. Former Morgan Stanley specialty finance research analyst, Kenneth Posner, managed corporate strategy and investor relations. Its original purpose was to take over banks that had difficulties due to the financial crisis of 2007–2010. The company's main interest was banks in the Carolinas and Florida, but in 2011, NAFH moved into Tennessee and Virginia for the first time. Despite buying seven distressed, money losing banks, Capital Bank was consistently profitable during the duration of its existence and consistently posted improved returns for each of its five years of operations. Capital Bank completed a successful IPO in September 2012, and used to trade on the NASDAQ under the ticker CBF until its acquisition by First Horizon National Corporation in December 2017.

Southern National Bank was a bank headquartered first in Lumberton, North Carolina and then in Winston-Salem, North Carolina. It joined with BB&T in 1995.

Centura Bank was a bank headquartered in Rocky Mount, North Carolina. It existed from 1990, when Peoples Bancorp and Planters Bank merged, to 2001, when the Royal Bank of Canada acquired the company and changed its name to RBC Centura.

Park Sterling Bank, whose parent company was Park Sterling Corp., was a bank based in Charlotte, North Carolina. It had $3.3 billion in assets and branches in North and South Carolina, Virginia and Georgia. A merger with South State Bank was completed November 30, 2017.