The Post Office and Sub-Treasury Building was designed to provide a permanent Boston office for the United States Postal Service, which had spent the early part of the nineteenth century repeatedly moving between various downtown locations in the city. [3] Efforts to build a proper post office building in Boston had begun during the administration of President Millard Fillmore, but these met with little success until 1867, when Andrew Johnson approved a joint resolution by the United States Congress for appointing a commission to determine a site for the structure. In 1868 a site was selected and Congress made an appropriation for purchase of the land, and groundbreaking took place in the following year. The ceremony for laying the cornerstone took place in 1871, by which time the first floor of the building was already nearly complete, and was attended by President Ulysses S. Grant and members of the United States Cabinet. [4]

Construction of the building was temporarily interrupted by the Great Boston Fire of November 9-10, 1872, which destroyed a significant portion of downtown Boston. The still-incomplete building, which stood at the very edge of the burnt district, survived due to the use of fireproof materials during development, but suffered $175,000 of damages as a result of the blaze. Soon afterward, the government bought up several adjacent plots destroyed by the fire and decided to undertake a significant expansion of the structure, increasing its size to the entire block between Milk, Congress, Water and Devonshire Streets. The originally-planned portion of the building was completed in late 1874, and the postal service moved there from its temporary headquarters in the Old South Meeting House on December 19. At the same time, an open space on Congress Street side of the building, formed by the expansion of the city streets in the aftermath of the fire, was named Post Office Square in recognition of the new structure. Construction of the expansion phase took several more years and only ended in 1885, by which time the total cost of the building had exceeded $6 million. [5]

The completed building was designed by Supervising Architect Alfred B. Mullett and revised by William Appleton Potter, with architect Alexander Rice Esty serving as Supervisor of Construction (from 1876-1881). It was built in the Second Empire style with Cape Ann granite and a prominent Mansard roof. Similar in appearance to both Old City Hall and the later Suffolk County Courthouse, it became one of several edifices that made Post Office Square a center of Victorian architecture in the late nineteenth century. [6] The first floor of the building was largely occupied by the postal service, while the upper stories were taken up by various other federal agencies and officials, including the Bureau of Internal Revenue, United States Lighthouse Board and the Signal Service. The third floor acted as the home of the United States circuit and district courts for Massachusetts. [3]

By the early twentieth century, the space requirements of the federal government had outgrown the existing building, which had also become an object of derision in the face of a modernist backlash against Second Empire architecture. Following the passage of the Public Buildings Act in 1926, a campaign began for the building to be replaced with a larger and more modern structure. An appropriation for the project was filed in 1927 and approved, and in 1928 the various federal agencies moved out of the building. In the following year it was demolished, and four years later it was replaced with the new United States Post Office, Courthouse, and Federal Building. [7]

Two large statuaries by Daniel Chester French which formerly stood on top of the building are now located in Franklin Park. These were preserved during the demolition and were subsequently gifted to the city of Boston. [8] 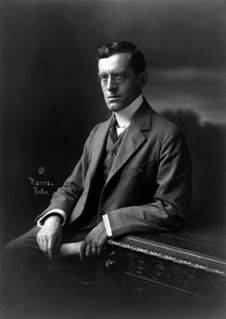 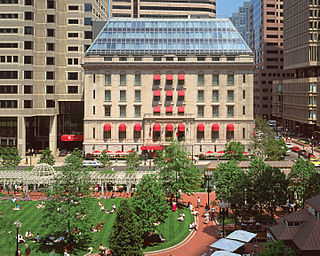 Post Office Square in Boston, Massachusetts is a square located in the financial district at the intersection of Milk, Congress, Pearl and Water Streets. It was named in 1874 after the United States Post Office and Sub-Treasury which fronted it, now replaced by the John W. McCormack Post Office and Courthouse. 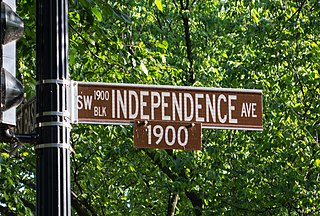 Alfred Bult Mullett was a British-American architect who served from 1866 to 1874 as Supervising Architect, head of the agency of the United States Treasury Department that designed federal government buildings. His work followed trends in Victorian style, evolving from the Greek Revival to Second Empire to Richardsonian Romanesque. 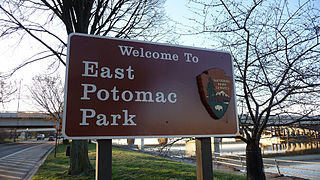 East Potomac Park is a park located on a man-made island in the Potomac River in Washington, D.C., United States. The island is between the Washington Channel and the Potomac River, and on it the park lies southeast of the Jefferson Memorial and the 14th Street Bridge. Amenities in East Potomac Park include the East Potomac Park Golf Course, a miniature golf course, a public swimming pool, tennis courts, and several athletic fields. The park is a popular spot for fishing, and cyclists, walkers, inline skaters, and runners heavily use the park's roads and paths. A portion of Ohio Drive SW runs along the perimeter of the park. 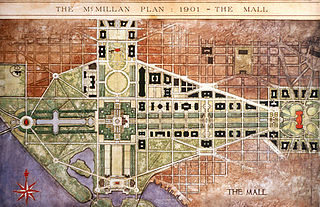 The Bedford Block is an historic commercial building at 99 Bedford Street Boston, Massachusetts in an area called Church Green. Built in 1875 in a style promoted by John Ruskin called Venetian Gothic. The style may also be referred to as Ruskinian Gothic. 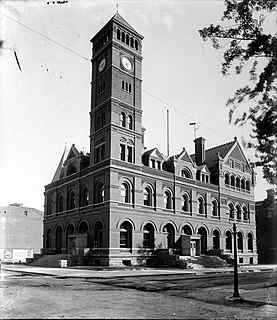 Mifflin Emlen Bell, often known as M.E. Bell, was an American architect who served from 1883 to 1886 as Supervising Architect of the US Treasury Department. Bell delegated design responsibilities to staff members, which resulted in a large variety of building styles, including Second Empire, Châteauesque, Queen Anne and Richardsonian Romanesque.

The Park Theatre (est.1879) was a playhouse in Boston, Massachusetts, in the late 19th and early 20th centuries. It later became the State cinema. Located on Washington Street, near Boylston Street, the building existed until 1990.

Campbell, Aldrich & Nulty was a Boston, Massachusetts, United States, architectural firm. The firm's principals were forefront modernists, during the 1950s–1970s period when International Modernism matured in America. The successors to Campbell & Aldrich, the principals at Campbell, Aldrich & Nulty were Nelson Wilmarth Aldrich, who in the late 1930s studied under Walter Gropius and Marcel Breuer at the Harvard Graduate School of Design, and Lawrence Frederick Nulty. In the late 1960s and in the 1970s, the partnership of Nelson Wilmarth Aldrich and Lawrence Frederick Nulty designed some of New England's most recognizable and controversial modernist architecture. 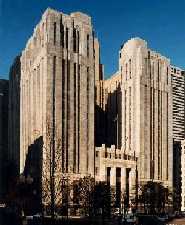 The John W. McCormack Post Office and Courthouse, formerly the United States Post Office, Courthouse, and Federal Building is a historic building at 5 Post Office Square in Boston, Massachusetts. The twenty-two-story, 331-foot (101 m) skyscraper was built between 1931 and 1933 to house federal courts, offices, and post office facilities. The Art Deco and Moderne structure was designed in a collaboration between the Supervising Architect of the United States Treasury Department and the Boston architectural firm of Cram and Ferguson. It occupies a city block bounded by Congress, Devonshire, Water, and Milk Streets, and has over 600,000 square feet (56,000 m2) of floor space. The exterior of the building is faced in granite from a variety of New England sources, as well as Indiana limestone. It was built on the site of the 1885 United States Post Office and Sub-Treasury Building. 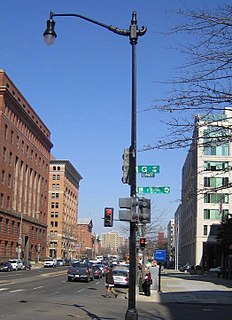 The following is a list of works about Boston, Massachusetts, USA.:

Central Wharf is a historic pier in Boston, Massachusetts. Built in 1815–1816 between Long Wharf and India Wharf, it originally extended from India Street nearly a quarter-mile into Boston Harbor. Today, the much-shortened wharf serves as the home of the New England Aquarium. 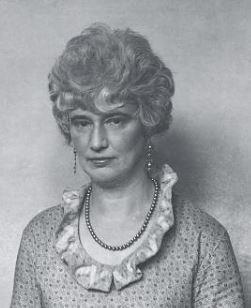 Caroline Speare Rohland was an American artist and muralist who created three post office murals, as part of the art projects for the New Deal's Section of Painting and Sculpture. In addition to the three murals, Rohland has works in the permanent collections of the Library of Congress, The Honolulu Academy of Art, the New Mexico Museum of Art and the Whitney Museum of American Art.

The architecture of Boston is a robust combination of old and new architecture. As one of the oldest cities in North America, Boston, Massachusetts has accumulated buildings and structures ranging from the 17th-century to the present day, having evolved from a small port town to a large cosmopolitan center for education, industry, finance, and technology. The city is known for its granite buildings stemming from its early days. It is also known for being one of the origins of Federal Architecture.