The Unity Movement (in Spanish: Movimiento Unidad, UNIDAD) is a political party coalition in El Salvador. The coalition was formed in 2013 by Former President Antonio Saca. The political parties that constituted the coalition include GANA, National Conciliation Party, and the Christian Democratic Party.

Elías Antonio "Tony" Saca González is a Salvadoran politician who was President of El Salvador from June 1, 2004 to June 1, 2009.

Saca was the party's candidate for president in the 2014 presidential election. 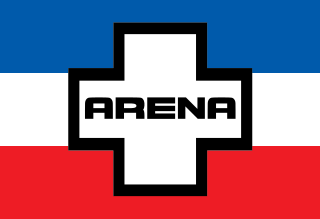 The Nationalist Republican Alliance is a conservative, right-wing political party of El Salvador. It was founded on 30 September 1981, by retired Salvadoran soldier Roberto D'Aubuisson and Mercedes Gloria Salguero Gross. It defines itself as a political institution constituted by "Salvadorans who defend the democratic, republican, and representative system of government, the social market economy system and nationalism".

The Popular Unity was a left-wing political alliance in Chile that stood behind the successful candidacy of Salvador Allende for the 1970 Chilean presidential election.

The Communist Party of Chile is a Chilean political party inspired by the thoughts of Karl Marx and Vladimir Lenin. It was founded in 1922, as the continuation of the Socialist Workers Party, and in 1932 it established its youth wing, the Communist Youth of Chile. 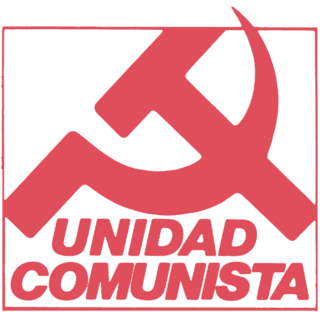 Workers' Party of Spain–Communist Unity was a communist political party in Spain, founded by Santiago Carrillo and his followers after their expulsion from the Communist Party of Spain (PCE) in October 1985.

The Solidarity Civic Unity (UCS) is a political party in Bolivia. UCS was founded on 15 August 1989 by Max Fernández, and is currently led by his son, Johnny Fernández.

The Christian People's Party is a center-right and conservative political party based on Christian Democracy. It was founded in 1966 by a group of the peruvian Christian Democrat Party dissidents, led by Luis Bedoya Reyes. In 2000 its inscription was renewed, and it became part of National Unity, albeit not in a permanent basis.

The Popular Unitary Action Movement or MAPU was a small leftist political party in Chile. It was part of the Popular Unity coalition during the government of Salvador Allende. MAPU was repressed during the dictatorship of Augusto Pinochet. In this period, some of its most radical members formed the Movimiento Juvenil Lautaro, whose leaders were political prisoners during the dictatorship and with the return to democracy. Another faction of the former members of the party joined the social democratic Party for Democracy in 1987.

The Democratic Unity Roundtable is a catch-all electoral coalition of Venezuelan political parties formed in January 2008 to unify the opposition to President Hugo Chávez's United Socialist Party of Venezuela in the Venezuelan parliamentary election, 2010. A previous opposition umbrella group, the Coordinadora Democrática, had collapsed after the failure of the Venezuelan recall referendum, 2004.

The Grand Alliance for National Unity is a political party in El Salvador. The party established itself on 16 January 2010 and was recognized by the Supreme Electoral Court of El Salvador on 19 May of the same year. GANA is a conservative and centre-right party. Nevertheless, it almost always forms a parliamentary coalition with the ruling leftist Farabundo Martí National Liberation Front (FMLN).

Plurinational Unity of the Lefts is a left-wing political coalition in Ecuador, created in 2011. 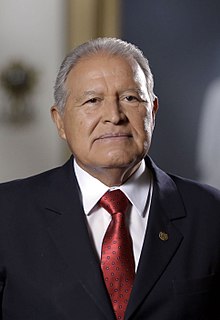 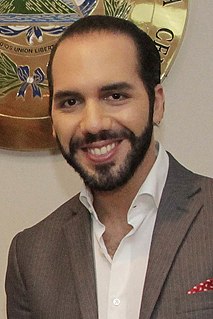 Nayib Armando Bukele Ortez is a Salvadoran politician and businessman who is the President-elect of El Salvador after winning the 2019 election. He is due to take office on 1 June 2019. Nayib Bukele ran as the candidate of the centre-right GANA party and will become the first president since José Napoleón Duarte (1984–1989) to not have been elected as the candidate of one of the country's two major political parties, the FMLN and ARENA. 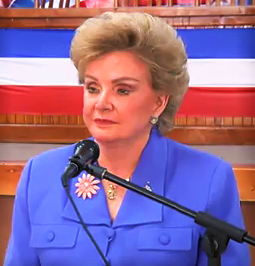 Mercedes Gloria Salguero Gross was a Salvadoran politician, businesswoman and one of the founders of the Nationalist Republican Alliance (ARENA). She served as the President of the Legislative Assembly of El Salvador from 1994 to 1997.