Untermeitingen is a municipality in the district of Augsburg in Bavaria in Germany.

Untermeitingen is found in the district of Augsburg Untermeitingen which is located in the Lechfeld plain on the left bank of the Lech, 27 km south of Augsburg. The town, located on the border with the district of Landsberg am Lech, forms the administrative area of Lechfeld with the area Klosterlechfeld. Two municipalities together contained 8,795 inhabitants in 2006 over an area of 18 38 km ².

Surrounding communities (starting from the north and in the direction of clockwise): Graben, Scheuring, Obermeitingen, Langerringen and Schwabmünchen.

From the tenth century, the village belonged to the bishopric of Augsburg. In 1803, Untermeitingen became part of the new Kingdom of Bavaria. In 1818, it was built as a town and became part of the borough of Schwabmünchen until the latter's death in 1972.

The neighborhood of Lagerlechfeld exists since the nineteenth century as a large military establishment. By 1870, it housed a prison camp, then various railway buildings were built, plus a military hospital in 1899. In 1934, an air base was installed. During the Second World War it served as a base for tests for Messerschmitt Augsburg factories. The base was bombed in 1945. Since 1956, this is a facility of the Bundeswehr. 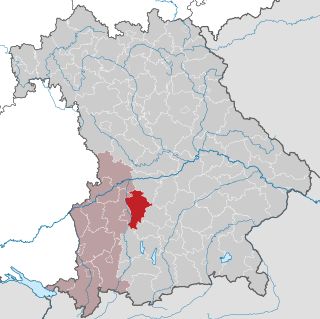 Aichach-Friedberg is a Landkreis (district) in Bavaria, Germany. It is bounded by the districts of Augsburg, Donau-Ries, Neuburg-Schrobenhausen, Pfaffenhofen, Dachau, Fürstenfeldbruck and Landsberg, as well as by the city of Augsburg.

Landsberg is a Landkreis (district) in Bavaria, Germany. It is bounded by the districts of Aichach-Friedberg, Fürstenfeldbruck, Starnberg, Weilheim-Schongau, Ostallgäu and Augsburg. 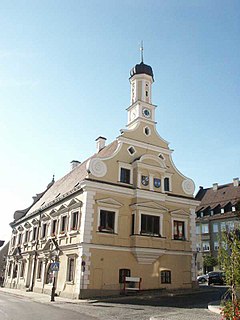 Friedberg is a town in the district Aichach-Friedberg, Bavaria, Germany, with some 30,000 inhabitants. It is located next to Augsburg at the Lech river. The city was founded in the 13th century in order to collect a toll from people using the bridge across the Lech River.

Ostallgäu is a Landkreis (district) in Swabia, Bavaria, Germany. It is bounded by the districts of Oberallgäu, Unterallgäu, Augsburg, Landsberg, Weilheim-Schongau and Garmisch-Partenkirchen, and by the Austrian state of Tyrol. The town of Kaufbeuren is enclosed by but does not belong to the district. 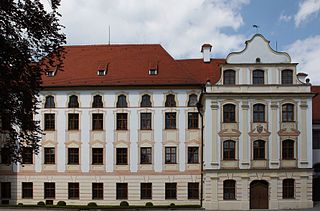 Thierhaupten Abbey was a Benedictine monastery in Thierhaupten near the Lech River and near Augsburg in Bavaria, Germany.

Bobingen is a town in Bavaria, Germany. It lies on the rivers Wertach and Singold, on the edge of the Augsburg-Westliche Wälder Nature Park, in Augsburg District, some 13 km south of Augsburg itself.

Schwabmünchen is a town in Bavaria in the administrative region of Swabia south of Augsburg in the Augsburg district. 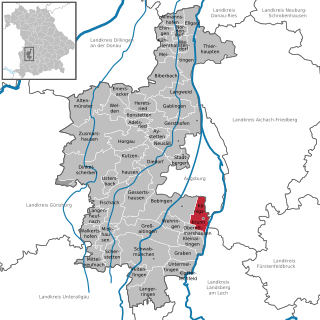 Königsbrunn is the largest town in the district of Augsburg, in Bavaria, Germany. It is situated on the left bank of the Lech, approx. 10 km south of Augsburg.

Mering is a municipality in the district Aichach-Friedberg, in Bavaria, Germany. It is located on the river Paar. 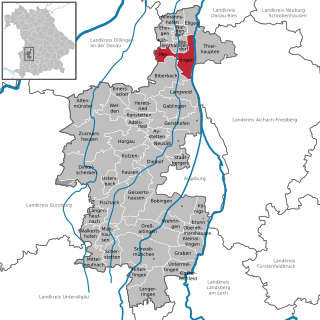 Meitingen is a market town in the district of Augsburg, in Bavaria, Germany. It is situated on the left bank of the Lech, 20 km (12 mi) south of Donauwörth, and 21 km (13 mi) north of Augsburg. 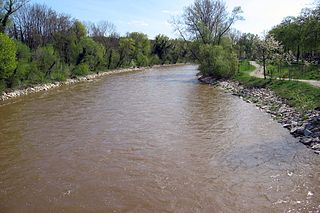 The Wertach is a river in Bavaria, southern Germany, a left tributary of the Lech. Its total length is 141 km (88 mi). The Wertach originates in the Northern Limestone Alps in Bad Hindelang, east of Sonthofen. It flows north along the towns Wertach, Nesselwang, Marktoberdorf, Kaufbeuren, Schwabmünchen and Bobingen. The Wertach flows into the Lech in Augsburg. 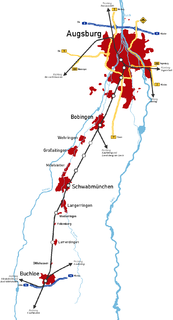 The Augsburg–Buchloe railway is a double-track main line in the German state of Bavaria. It runs from Augsburg to Buchloe. Other major towns on the route are Bobingen and Schwabmünchen. It was built as part of the Ludwig South-North Railway, one of the oldest lines in Germany.

Augsburg Morellstraße station is a station on the Augsburg–Buchloe railway in the German state of Bavaria. It is located south of the centre of Augsburg on the border of the districts of Antonsviertel and Hochfeld. It is a through station built with eight tracks and one island platform and is classified by Deutsche Bahn as a category 6 station. 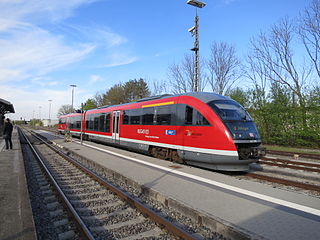 The Bobingen–Landsberg am Lech railway is a branch line in Swabia and Upper Bavaria.

The railway line from Landsberg am Lech to Schongau on Fuchstal, Denklingen and Hohenfurch, also called Fox Valley Railway, is a railway line, which was built with regard to freight transport, so that most stations are located about one kilometer from the previous site.