In American football, the upback (also known as the punt protector or personal protector) is a blocking back who lines up approximately 1-3 yards behind the line of scrimmage in punting situations.

Because the punter plays so far back, the upback frequently makes the line calls and calls for the snap to be received by the punter. Their primary role is to act as the last line of defense for the punter. Upbacks may occasionally receive the snap instead of the punter on fake punts. Upbacks receiving the snap normally run the ball, but they may throw it. An upback is typically played by a back-up for another position, mostly a linebacker, running back, or a fullback. This position is usually referred to simply as a special teamer, or even a gunner (though that word is used more often for a different position). A notable upback is Nate Ebner, formerly of the New England Patriots. A former rugby union player, Ebner uses his versatility in order to execute fake punts and protect the punter. 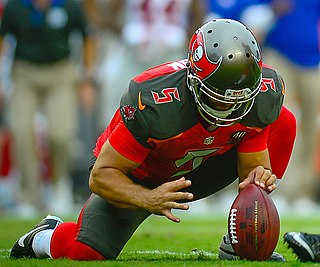 In gridiron football, the holder is the player who receives the snap from the long snapper during field goal or extra point attempts made by the placekicker. The holder is set on one knee seven yards behind the line-of-scrimmage. Before the play begins he places the hand which is closest to the placekicker on the ground in a location designated by the kicker's foot, with his forward hand ready to receive the snap. After receiving the snap, the holder will place the football on the turf, or block, ideally with the laces facing the uprights and the ball accurately placed where the backhand was initially, then balancing the ball with one or two fingers until the ball is kicked.

The Colts Catastrophe was an ill-fated trick play attempted by the National Football League (NFL)'s Indianapolis Colts on October 18, 2015. The fake punt, attempted in a regular-season game against the New England Patriots, failed in spectacular fashion, and resulted in a tackle for loss, penalty, and harsh criticism of the players and coaches involved.