VTV7 is a national education television channel owned by Vietnam Television. It is a product of a cooperation between VTV Network's Center for Educational Productions with the Ministry of Education and Training of Vietnam, and its partners EBS (Korea) and NHK (Japan). VTV7 began airing on a trial basis on November 20, 2015, [1] and began regular programming on January 1, 2016. [2] Its launching ceremony was broadcast on January 8, 2016. [3]

The audience of VTV7 is mainly students. At the beginning of the broadcast, VTV7 is aimed at preschool and elementary children. The channel also has programs suitable for other audiences such as middle school students, high school students, adults, ethnic minorities, and people with disabilities.

Although VTV7 spends most of its time on educational programs, it also has entertainment programming and programs of humanitarian significance. It also has purchased the copyright from foreign partners.

VTV4 is a Vietnamese state-owned pay television network, serving as the international broadcaster of Vietnam Television. Launched in 7 January 1998, it offers a best-of package of programming from the three domestic channels to the Vietnamese diaspora worldwide.

SGO48 is a Vietnamese idol girl group based in Saigon, officially known as Ho Chi Minh City, Vietnam. The group is the sixth international sister group of AKB48, proceeding AKB48 Team TP, debuted on December 22, at Crescent Mall, District 7, Ho Chi Minh City. Originally consisted of 29 founding members, known as the first generation, the group is currently consisted of 20 members as of April 2021, thus becoming the Vietnamese girl group with the most members. 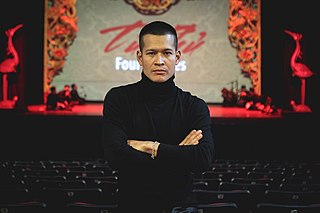 VTV5 is a Vietnamese state-owned pay television network, serving as the international broadcaster of Vietnam Television. Launched in 2002, it offers a best-of package of programming which aimed into the ethnic minorities in Vietnam.

Nguyễn Thị Hòa, known professionally as Hòa Minzy, is a Vietnamese singer and actress. She is the champion of the reality television competition Star Academy Vietnam in its first season. Hòa Minzy is known to the audience as a young Vietnamese female singer who possesses a strong and inspirational voice.

The fourth season of the mystery music game show Hidden Voices is a Vietnamese spin-off program that officially recognized as part of I Can See Your Voice franchise, which premiered on 27 July 2019 on HTV7.