Weightlifting at the 1988 Summer Olympics

The weightlifting competition at the 1988 Summer Olympics in Seoul consisted of ten weight classes, all for men only. [1]

The Weightlifting Competition at the 2000 Summer Olympics in Sydney, Australia saw the introduction of women's weightlifting.

Bulgaria competed at the 2000 Summer Olympics in Sydney, Australia.

Stefan Khristov Botev was an Olympic weightlifter for Bulgaria and later for Australia. He was coached by Ivan Abadzhiev.

Ivan Ivanov Ivanov is a Bulgarian former weightlifter and current head coach of the national Bulgarian weightlifting teams. He claimed one gold medal at the 1992 Olympic Games, four time World Champion, and five time European Champion. He won the 1990 World Cup. Ivan also won 1991 World Cup Final in Barcelona and 1990 World Cup Final in Tainan, and in 1989 in Lisbon he finished second. In 1990 he became gold medalist of the Goodwill Games in Seattle. Ivanov was named the Best Weightlifter in the World by the International Weightlifting Federation for 1989 and 1990. Ivanov is also a three-time World Junior Champion and twice European Junior Champion. He was elected as the best coach of Bulgaria for 2019 by the Ministry of Youth and Sports of the country together with the trainer on rhythmic gymnastics Vesela Dimitrova.

The weightlifting competition at the 1976 Summer Olympics in Montreal consisted of nine weight classes, all for men only. The clean and press was dropped from the included lifts after the 1972 games in Munich, due to disagreement over proper form. The Games of 1976 were the first Olympics to start testing for anabolic steroids.

Bulgaria has established traditions in a great variety of sports.

Izabela Dragneva-Rifatova is a retired female weightlifter from Bulgaria, who is best known for being the first female weightlifter to be stripped of her medal and results and disqualified from an Olympic games for cheating. She twice competed for her native country at the Summer Olympics: 2000 and 2004. She won the silver medal in the women's – 53 kg division at the 1998 World Weightlifting Championships in Lahti.

The women's 48 kilograms weightlifting event at the 2000 Summer Olympics in Sydney, Australia took place at the Sydney Convention and Exhibition Centre on September 17.

The men's 56 kilograms weightlifting event at the 2000 Summer Olympics in Sydney, Australia took place at the Sydney Convention and Exhibition Centre on September 16.

The men's 62 kilograms weightlifting event at the 2000 Summer Olympics in Sydney, Australia took place at the Sydney Convention and Exhibition Centre on September 17.

Antonio Krastev was a Bulgarian super heavyweight Olympic-style weightlifter best known for his 1987 heaviest ever snatch in IWF competition, at 216 kg. This was only equalled by Behdad Salimi of Iran at the 2016 Summer Olympics, and finally surpassed at the 2017 European Championships by Lasha Talakhadze, who now holds the record of 220 kg. Krastev's record was no longer official after the restructuring of the weight classes in 1993 and 1998. 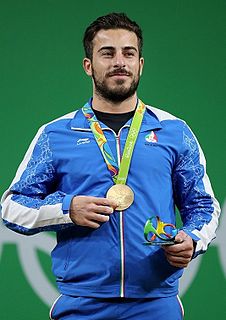 Kianoush Rostami is an Iranian Olympian weightlifter. He competed at the 2016 Summer Olympics, in the 85 kg event, winning the gold medal and setting a new world record with a total lift of 396 kilograms.

Angel Angelov Genchev is a Bulgarian weightlifter who competed for Bulgaria. He claimed the gold medal in weightlifting at the 1988 Summer Olympics – Men's 67.5 kg but was disqualified after he tested positive for furosemide, an IOC banned substance. It became a scandal because earlier in the meet fellow Bulgarian weightlifter Mitko Grablev had also been disqualified, after claiming a gold medal in his division, when his drug test came back positive, also for furosemide. The Bulgarian weightlifting team was forced to withdraw midway through the Weightlifting competition. Of six athletes known to have lifted more than triple their bodyweight, Genchev's 202.5 kg world record was the heaviest ever performed in competition. Genchev is a European champion in the 75 kg category from Cardiff in 1988. He was also a bronze medalist at the 1994 World Championships in Istanbul. He won the European Cup in 1987 from the tournament in Miskolc, Hungary, with the team of Bulgaria. There he set a world record in snatch - 170 kg. Angel is a four-time World and European junior champion.

Andor Szanyi is a weightlifter who competed for Hungary. His entire career has been marred by controversy after he was stripped of the silver medal at the 1988 Summer Olympics for cheating.