Joseph Wayne McVey IV (born January 19, 1977), better known by his stage names Z-Ro and the Mo City Don, is an American rapper from Houston, Texas. He was named one of America's most underrated rappers by The New York Times in 2007. [4]

Z-Ro was born Joseph Wayne McVey IV in Houston's South Park neighborhood on January 19, 1977. [5] When he was six, his mother died, and he was shuttled from household to household in search of stability, eventually settling in the Ridgemont area, a middle-class neighborhood in Southwest Houston near the suburb of Missouri City. [5] When Z-Ro reached his late teens he was unemployed and resorted to drug dealing and hustling on the streets. [5] According to Z-Ro, listening to the music of 2Pac, Geto Boys, Bone Thugs-N-Harmony, Street Military, K-Rino and Klondike Kat inspired him to work harder for his goal of leaving the streets. [5] Z-Ro discovered his talent of freestyle rapping and after going through a couple of recording studios to make a demo, [5] the CEO of a local label discovered and signed him.

Z-Ro released his critically acclaimed Rap-a-Lot debut titled The Life of Joseph W. McVey . [5] [6] The record was a huge success and helped expand Z-Ro's fan base beyond the South. [5] In 2005, Z-Ro released Let the Truth Be Told , which was well received. [5] Z-Ro's 2006 album I'm Still Livin' was released while he was imprisoned for drug possession, to positive reviews. [7] [8] It was called "a great album... powerful" but "relentlessly bleak" by The Village Voice [7] and "one of the best rap albums to come out of Houston" by the Houston Chronicle. [9] In 2010 he released the album titled Heroin , which was followed by an album titled Meth in 2011 and then Angel Dust in 2012.

In 2016, Z-Ro released Drankin & Drivin in August [11] and Legendary in November under his label One Deep Entertainment.

In 2017, Z-Ro announced he was retiring and released No Love Boulevard in June as his final album. [12] He came out of retirement 6 months later and released Codeine in December.

In 2018, Z-Ro released Sadism on November 16 under One Deep Entertainment and was distributed by EMPIRE. [13]

In 2022, in a statement to XXL , Z-Ro claims Trae Tha Truth asked to talk to him outside a Houston Restaurant before he allegedly sucker punched him. After that, several men jumped in and continued to assault him. [16]

On July 26, 2017, Z-Ro was arrested after his ex-girlfriend, Just Brittany, accused him of beating her three months earlier. Z-Ro told the media that Brittany was using this accusation to get more publicity for herself as she is also appearing in a reality show on television. [17] On October 10, a grand jury dropped the felony charges. [18] The next day, the Harris County, Texas, district attorney filed misdemeanor charges against Z-Ro on the same alleged incident. [19] 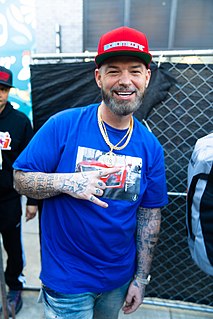 Paul Michael Slayton, better known by his stage name Paul Wall, is an American rapper and DJ. He has spent much of his career affiliated with Swishahouse Records, and has released several albums under the label and collaborated with numerous other rappers signed to the label. He began his career performing alongside fellow Houstonian Chamillionaire, with whom he released several albums, including 2002's independently released Get Ya Mind Correct. In 2005, he was signed to Atlantic Records and became successful with his major label debut The Peoples Champ, which was followed up by Get Money, Stay True followed in 2007. He has been nominated for one Grammy Award for Best Rap Performance as a Duo or Group for the song "Grillz", his collaboration with rapper Nelly. 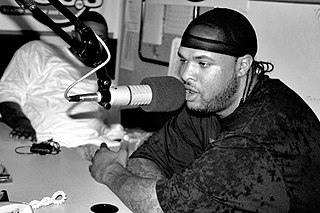 Stayve Jerome Thomas, better known by his stage name Slim Thug, is an American rapper. He initially gained mainstream attention for his contribution to the hit single by rapper Mike Jones, "Still Tippin'". In July 2005, he released his debut album Already Platinum, which reached number two on the Billboard 200 chart. That same year, he was featured on the Beyoncé Pink Panther song "Check on It", which reached number one on the Billboard Hot 100, and won the MTV Video Music Award for Best R&B Video.

Hakeem Temidayo Seriki, better known by his stage name Chamillionaire, is an American rapper. He was the founder and an original member of The Color Changin' Click from 2001 until the group split in 2005. He began his solo career with local releases in 2002, including the collaborative album Get Ya Mind Correct with fellow Houston rapper and childhood friend Paul Wall. He signed to Universal Records in 2005 and released The Sound of Revenge under Universal. It included hit singles "Turn It Up" featuring Lil' Flip and the number-one, Grammy-winning hit "Ridin'" featuring Krayzie Bone of Bone Thugs-n-Harmony. Ultimate Victory followed in 2007, which was notable for not containing any profanity. Chamillionaire is also known for his most anticipated Mixtape Messiah series, which ran from 2004 until 2009.

The Screwed Up Click is an American hip hop collective based in Houston, Texas, that was led by DJ Screw. Its most notable members include DJ Screw, Big Hawk, Big Mello, Big Moe, Big Pokey, the Botany Boyz, E.S.G., Fat Pat, Lil' Flip, Lil' Keke, Lil' O, and Z-Ro. In addition, Devin the Dude, K-Rino, Lil' Troy, South Park Mexican and UGK are considered to be "Screwed Up Affiliated". Many of the current and former SUC members come from the neighborhoods of South Park, 3rd Ward, Sunnyside, Cloverland, Hiram Clarke and South Acres. 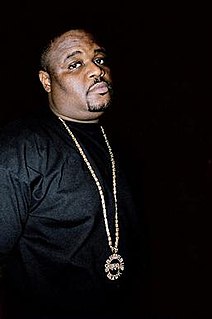 John Edward Hawkins, better known by his stage names Big Hawk and H.A.W.K., was an American rapper from Houston, Texas and a founding member of the late DJ Screw's rap group the Screwed Up Click. 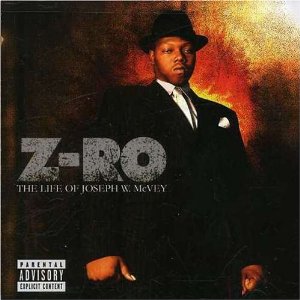 The Life of Joseph W. McVey is the eighth solo studio album by American rapper Z-Ro. It was released on February 24, 2004 through Rap-A-Lot 4 Life/J. Prince Entertainment with distribution via Asylum Records. Recording sessions took place at Dean's List House Of Hits in New York City, at Noddfactor Studios in Denton, and at M.A.D. Studios in Houston. Production was handled by Mike Dean, Mr. Lee, Bigg Tyme, Sean "Solo" Jemison and Tone Capone. It features guest appearances from Trae tha Truth, Scarface and Tanya Herron. The album peaked at number 170 on the Billboard 200 in the United States. 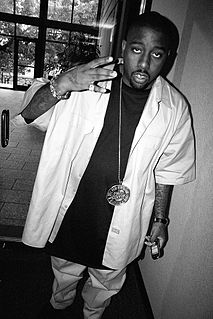 Frazier Othel Thompson III, better known by his stage name Trae tha Truth, is an American rapper and record executive from Houston, Texas. Embarking on a musical career in 1998, he soon established himself as a prominent member of the Texas hip hop scene with his solo debut, Losing Composure (2003). Same Thing Different Day (2004) and Restless (2006) followed up, the latter of which was his debut on Rap-a-Lot Records.

This is the discography of rapper Z-Ro. 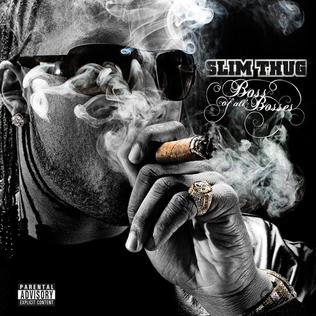 Boss of All Bosses is the second solo studio album by American rapper Slim Thug from Houston, Texas. It was released on March 24, 2009, by his Boss Hogg Outlawz label, distributed by E1 Music. The album features guest appearances from Mannie Fresh, Z-Ro, Mike Jones, Scarface and UGK, while the production on the album was primarily handled by Mr. Lee, along with several producers, including Jim Jonsin, Mr. Rogers, and Bigg Tyme, among others. 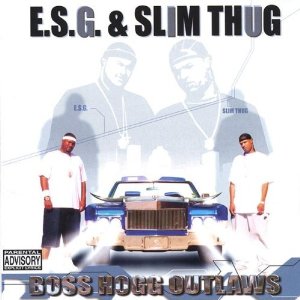 Boss Hogg Outlaws is a collaborative studio album by American southern rap artists E.S.G. and Slim Thug from Houston, Texas. It was released on November 6, 2001 via Houston-based record label S.E.S. Entertainment. It features guest appearances from Big Hawk, Bun B, Carmen SanDiego, Daz Dillinger, Lil' Keke, Lil' O, Scarface and Z-Ro. The album peaked at #55 on the Top R&B/Hip-Hop Albums, #16 on the Independent Albums and #30 on the Heatseekers Albums in the US Billboard charts. Two singles were released from the album: "Getchya Hands Up" and "Thug It Up".

Dallas Blocker is an American singer, producer and songwriter. After signing with Latium Records in 2004, Blocker later formed independent label Blockerboy Music LLC on which he released the EP Alone, the album Love and Lust and the Billboard chart hit "Rock Ya Body".

Migos is an American hip hop group from Lawrenceville, Georgia, founded in 2008. The group was originally composed of Southern rappers Quavo, Takeoff, and Offset. Quavo is from Athens, Georgia; Offset and Takeoff were born and raised in Lawrenceville, Georgia. They are managed by Coach K, the former manager of Gucci Mane and Jeezy, and frequently collaborated with producers such as DJ Durel, Murda Beatz, Zaytoven, and Buddah Bless. Recognized for their contribution to trap music in the 2010s, Billboard stated that the group "influenced pop culture and the entire English language by bringing their North Atlanta roots to the mainstream". 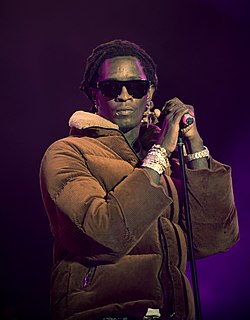 Jeffery Lamar Williams, known professionally as Young Thug, is an American rapper, singer, and songwriter. He is considered to be an influential figure of his generation, with his music impacting the modern sound of hip hop and trap music. Known for his eccentric vocal style and fashion, Thug initially released a series of independent mixtapes beginning in 2011 with I Came from Nothing. In early 2013, he signed with Gucci Mane's 1017 Records, and later that year he released his label debut mixtape 1017 Thug to critical praise. 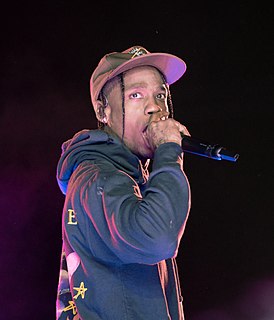 Jacques Bermon Webster II, better known by his stage name Travis Scott, is an American rapper, singer, songwriter, and record producer. His stage name is the namesake of a favorite uncle combined with the first name of one of his inspirations, Kid Cudi.

Navraj Singh Goraya, known professionally as Nav, is a Canadian rapper, singer, songwriter, and record producer. He began his career as a producer, co-producing fellow Canadian rapper Drake's single "Back to Back" in 2015. He then gained mainstream attention in 2016 when his song "Myself" went viral. Nav is signed to the Weeknd's record label XO Records and Republic Records, and is managed by label managers Amir "Cash" Esmailian and Wassim "Sal" Slaiby.

Kirshnik Khari Ball or Kirsnick Khari Ball, known professionally as Takeoff, was an American rapper. He was best known as a third of the hip hop trio Migos along with his uncle Quavo and first cousin once removed Offset. The group scored multiple top ten hits on the Billboard Hot 100 including "MotorSport" featuring Nicki Minaj and Cardi B, "Stir Fry", "Walk It Talk It" featuring Drake, and "Bad and Boujee" featuring Lil Uzi Vert, the latter of which peaked at the top of the chart. He also received two Grammy Award nominations. On November 1, 2022, Takeoff was shot and killed in Houston, Texas.

Wikiquote has quotations related to Z-Ro .
This page is based on this Wikipedia article
Text is available under the CC BY-SA 4.0 license; additional terms may apply.
Images, videos and audio are available under their respective licenses.