Rap-A-Lot is a hip hop record label founded by James Prince in 1987. [2] Smoke-a-Lot Records is a subsidiary.

The label's most popular acts were The Geto Boys and Devin the Dude, whom The New York Times called "a brilliant oddball with a spaced-out flow." [4]

On August 22, 2013, Rap-A-Lot announced a distribution deal with RED Distribution. Artists on its roster include Z-Ro and Bun B. [5]

The Geto Boys were an American hip hop group originally formed in Houston, Texas. The group was formed in 1987. The Geto Boys enjoyed success in the 1990s with the group's classic lineup consisting of Bushwick Bill, Scarface and Willie D, earning several certified albums and hit singles, including "Mind Playing Tricks on Me" which reached No. 1 on the Hot Rap Songs and #23 on the Billboard Hot 100. 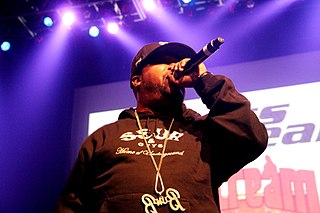 Bernard James Freeman, known professionally as Bun B, is an American rapper and actor. He is best known as one half of the southern rap duo UGK, a group he formed in 1987 alongside Pimp C. Aside from his work with UGK, Bun B has released five solo albums, including 2010's Trill OG, which received the rare 5-mic rating from The Source.

My Homies is the fifth studio album by American rapper Scarface. The album was released March 3, 1998, by Rap-A-Lot Records and Virgin Records. The album features production by Mike Dean, Mr. Lee, N.O. Joe, Scarface and Tone Capone. It peaked at number 1 on the Billboard Top R&B/Hip-Hop Albums and at number 4 on the Billboard 200 and was certified Platinum by the RIAA on April 6, 1998. The album features guest performances by 2Pac, Master P, Ice Cube, Devin the Dude, B-Legit, UGK, Too Short, Do or Die and Willie D. Scarface appears solo on two of thirty songs, performs with others on thirteen and does not contribute vocals on fifteen. A sequel to the album, My Homies Part 2, was released on March 7, 2006.

Michael George Dean is an American hip hop record producer, audio engineer, songwriter, and multi-instrumentalist from Angleton, Texas. He is best known for recording and mixing songs and synthesizers for major artists across the American hip hop industry such as Kanye West, 2Pac, Scarface, Travis Scott, 2 Chainz, Jay-Z, Desiigner, Drake, and The Weeknd. He released his second studio album, 4:22, on April 22nd, 2021.

Thugged Out: The Albulation is the debut solo studio album by American rapper Yukmouth. It was released as double album on November 3, 1998 via Rap-A-Lot Records. Recording sessions took place at Enterprise Studio in Burbank) and at the Hippie House in Houston. Production was handled by Mike Dean, Mr. Lee, Don Juan, Tone Capone and Keith "88 Keys" Kinlow, with J. Prince serving as executive producer. It features guest appearances from his The Regime groupmates Phats Bossilini, Tech N9ne, Madd Maxx and Poppa LQ, a former Luniz partner Numskull, West Coast hip hop acts MC Ren, Outlawz and Tha Dogg Pound, several labelmates from Rap-A-Lot roster, such as the 5th Ward Boyz, DMG, Do or Die, Scarface and Willie D, as well as Fa Sho, Big Lurch, Tela and Val Young among others. The album peaked at number 40 on the Billboard 200 and at number 8 on the Billboard Top R&B/Hip-Hop Albums in the United States. 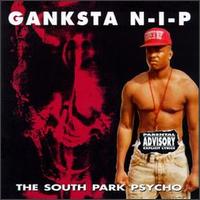 The South Park Psycho is the first album by the rapper Ganksta N-I-P. It was released on February 26, 1992, through Rap-a-Lot Records. The album has production from Ganksta N-I-P, The Terrorists, John Bido and Doug King. The album is one of the earliest examples of the horrorcore genre, and considered by many as a Southern hip hop classic.

"You're Everything" is a song by American rapper Bun B, released July 31, 2008 as the second single from his second studio album II Trill (2008). The song, produced by Mr. Lee, features fellow southern rappers Rick Ross, David Banner and 8Ball & MJG. The video was released August 6, 2008, on BET's Access Granted.

Joseph Johnson, known by his stage name N.O. Joe, is an American musician, hip hop record producer and songwriter. N.O. Joe was a pioneer of the Southern Hip Hop sound during the 1990s. He operates a production company named Gumbo Funk, which is also a name given to his melange of musical styles 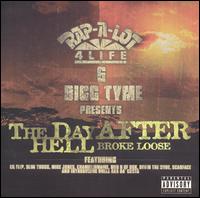 The Day After Hell Broke Loose is a compilation album released by Rap-a-Lot Records in conjunction with producer Bigg Time.

J Prince Presents R.N.D.S. is a two-disc compilation album of presented and executive produced by Rap-A-Lot Records CEO J. Prince. It was released on October 5, 1999 through Priority Records.

The following is a partial list of albums released through Priority Records. Any additional record labels involved are specified in brackets.

This is a list of rappers from the Gulf Coast. cites surrounding the areas of Houston, New Orleans, Mobile, Pensacola, Tampa, and Gulfport.