All teams were required to play each team twice, once home and once away, as well as their Millennium Magic fixture, and four more fixtures decided by their league position at the end of the 2007 season.

The 2008 Super League championship was decided through a play-off system, in which the participants were included according to their league position at the end of 27 regular rounds. The play-off system had no bearing on the minor premiership (otherwise known as the League Leaders' Shield).

Super League XIII followed the top-six play-off system. It was the seventh year in a row the format had been applied, as well as being the final year before the play-offs were expanded in the 2009 season. Places were granted to the top six teams in the Super League XIII table. Following the final round of matches on the weekend of 5–7 September, all six play-off teams were set (in order of finishing place):

Home field advantage was given by league position at the end of regular rounds, with the lower of the two teams playing at the higher team's ground. The only exception to this was the Grand Final, which was played at Old Trafford following tradition. The top-six system followed double elimination rules for the first and second placed team, meaning whichever of the teams lost in the qualifying semi-final had to lose again before being knocked-out of the play-offs entirely.

A Note A: Wigan Warriors vs Bradford Bulls was played at Stobart Stadium Halton due to the JJB Stadium being unavailable due to an association football fixture taking place the following day. 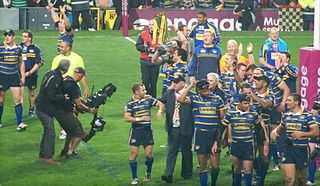 This article details the 2007 Super League season results. The season consisted of 27 rounds as well as a play-off finals series after the end of regular rounds. In all, 168 matches were played by twelve teams, covering nine months from February to October.

John Dean Bateman is an English professional rugby league footballer who plays as second-row and loose forward for the Wigan Warriors in the Betred Super League, and England and Great Britain at international level.

This article details the Warrington Wolves RLFC's 2014 season. The Wolves have been present in all previous Super League seasons dating back to 1996. This year they are competing in Super League XIX and the 2014 Challenge Cup.

Super League XXV, known as the Betfred Super League for sponsorship reasons, was the 25th season of Super League and 126th season of rugby league in Great Britain. St Helens were the reigning champions going into Super League XXV. At the start of the season, it consisted of twelve professional rugby league teams: ten from England, one from Canada, and one from France. Due to financial pressures related to the season suspension, Canadian side Toronto Wolfpack withdrew from the league in July 2020, and the league continued with just 11 teams.

The 2020 Super League XXV season is the 25th season of Super League, and 126th season of rugby league in Great Britain. It began on 30 January 2020, and was originally scheduled to end on 10 October 2020. It was to have consisted of 29 regular season games, and four rounds of play-offs, including the Grand Final at Old Trafford. Due to the ongoing effects of the Covid-19 pandemic, there is uncertainty surrounding the remaining fixtures, and the league table will be decided on a percentage basis for the first time since 1930. The fixture list was released on 5 November 2019.

The 2020 season is Wigan Warriors's 40th consecutive season playing in England's top division of rugby league. During the season, they competed in the Super League XXV and the 2020 Challenge Cup.