Tetleys Super League VI was the fourth and final time the top five playoff system would be used and the first season relegation was reintroduced with Huddersfield Giants again finishing bottom and relegated. Bradford Bulls finished top for a third time.

Bradford finished first in the table so they automatically qualified for the play-off semi-finals where they had a home time against Wigan at Odsal Stadium. Bradford won 24–18 to qualify for the Grand Final.

The play-off system in use only gave the league leaders a bye to the semi-finals. Wigan had finished second so had to play a qualifying play-off first. Drawn at home to Hull F.C. Wigan won a close game 27–24 to go through to the semi-final. This was an away fixture to Bradford where they were beaten 24–18. However this loss did not end their season. The losers of the qualifying semi-final got another chance by playing the winners of the other semi-final in a final eliminator. Therefore Saints' third play-off game was a home tie against St Helens where they won through 44–10.

The Warrington Wolves are a professional rugby league club in Warrington, England, that competes in the Super League. They play rugby at the Halliwell Jones Stadium, having moved there from Wilderspool in 2004. 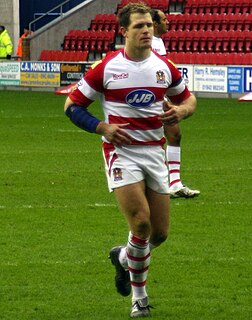 Stuart Fielden is an English former professional rugby league footballer who played in the 1990s, 2000s and 2010s. He was formerly an assistant coach for the Huddersfield Giants in the Super League, and now is a Personal trainer of Fielden Fitness in Leeds. A Great Britain international representative forward, he played his club rugby for Bradford Bulls with whom he won the 2001, 2003 and 2005 Super League Championships, 2000 and 2003 Challenge cups and World Club championships in 2002, 2004, 2006 before he moved to Wigan Warriors for a record transfer fee in 2006, winning the 2010 Super League Championship with them. He then signed with Huddersfield Giants in 2013 but played only a handful of games (9) before injury forced him into retirement. Fielden won 2 individual awards of young player of the year (2000) and International best forward (2005).He was named in 4 super league and 4 International dream teams.

James Lowes is a former professional rugby league footballer, and coach. He played for Hunslet and Leeds, but arguably his best years were spent with the Bradford Bulls, where he won many trophies. He played there from 1996 to 2003.

The 2002 Super League Grand Final was the Fifth official Grand Final and conclusive and championship-deciding game of Super League VII. Held on Saturday 19 October 2002 at Old Trafford, Manchester, the game was played between St. Helens and Bradford Bulls. Refereed by Russell Smith, the match was seen by a crowd of 61,138 and was won by St Helens 19 - 18.

The Super League (SL) sponsored as the Betfred Super League is the top-level of the British rugby league system. The league currently has twelve teams, eleven of which are from Northern England, reflecting the sport's geographic popularity within the UK. The final team is Catalans Dragons, from southern France.